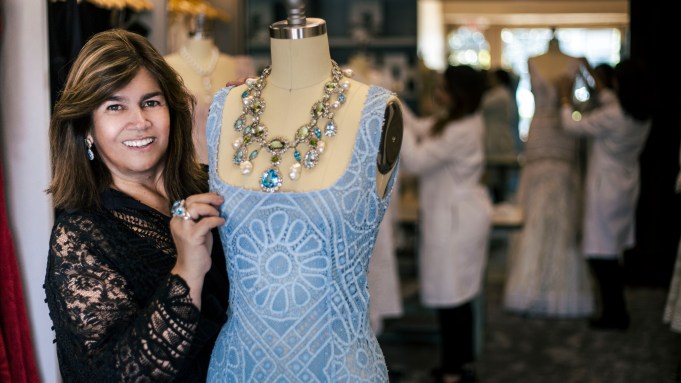 The designer is planning a full-on Brazilian party with the Caipirinhas — Brazil’s national cocktail — flowing as she rings in her new home at 8405 Melrose Place, next to Vanessa Seward’s first U.S. store, which opened earlier in the year. The party is expected to see actress Sofia Vergara, a fan of the brand who urged Medeiros to open in the U.S., along with a performance from singer Claudia Leitte.

The 1,200-square-foot store features her dreamy hand-crafted lace dresses and tops and small atelier at the back of the house where custom work and alterations can be done quickly. In about a month, the designer’s home collection will be added.

The designer said she wanted to bring a bit of craftsmanship and Brazil to the street.

The Melrose Place store joins three other Martha Medeiros stores in Brazil, one of which is focused solely on bridal.

The designer works exclusively with more than 450 women from different villages in Brazil who make the hand-lace material used in her pieces through what she calls the Institute Martha Medeiros. The women who are part of the Institute learn new skills at a craft, while also receiving support such as health care and education for not only themselves but also their families.

Her investment in the workers included a recent social media campaign that helped bring water and flowers — something many of the women had never seen — to a northeastern portion of Brazil, called Sertão. Flowers make regular appearances in Medeiros’ lace work and accessories.

“We believe the future [generation] has an antique heart,” Medeiros said.

The store has been open to private clients, but Sunday’s event serves as the official grand opening. Many of her clients call on the designer for bridal gowns and will sometimes enlist Medeiros to do the decorations for a wedding, ranging from handmade lace napkins and tablecloths and on down to individual lace dessert holders.

“People don’t want to spend time on the details. I believe that God lives in the details,” the designer said.

She hopes people will gravitate to her pieces, which fuse the lace with contemporary styling in the way of fitted, romantic gowns rather than dresses with full skirts, although her collection does include some of that done in her own way.