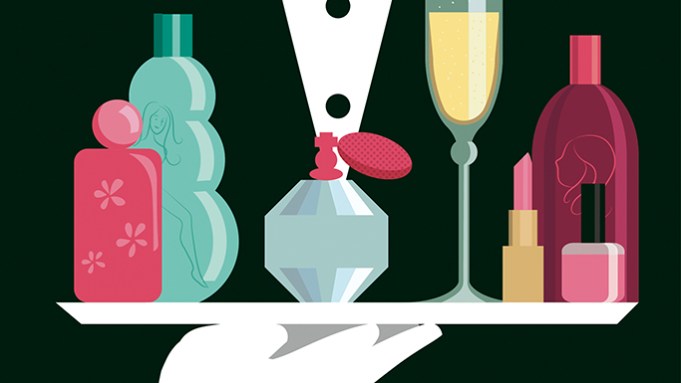 The mass-market beauty industry is adrift and looking for some wind.

After an eye-opening year — when the prestige channel yet again outpaced mass-market beauty sales and shoppers continued to migrate to other outlets, including online — chain retailers are playing defense.

Both retailers and brands are searching for clues as to why their business has deflated at a time when their upmarket peers in department stores are thriving.

According to the Nielsen NPD Beauty Cross Channel Monitor, the U.S. prestige beauty industry expanded 5.5 percent to $11.3 billion for the 52-week period ended in March. During that same period, Nielsen reported mass-market beauty sales gained 2.8 percent to $22.3 billion. It marked the second consecutive year that prestige gains eclipsed those at mass.

This is a startling reversal, considering that in the past — particularly during the recession — drugstore chains prided themselves on stealing market share from prestige.

The statistics are a glaring reminder of a missed opportunity to keep the shoppers who had entered their doors in droves during the recession, in some cases boosting volume by as much as 5 to 8 percent.

Now that the economy has rebounded, many of those consumers have traded up — ­back to their previous spending patterns — and moved on.

“Some of [the shoppers] stayed, but a lot of them said that now they have a little more money, they want a total holistic beauty experience,” said Wendy Liebmann, chief executive officer of WSL Strategic Retail, referring to a better grade of service and environment when shoppers returned to upscale venues. “These opportunities don’t come along that often and [mass retailers] didn’t really take advantage,” she said. Liebmann believes some mass retailers underestimated the importance of the in-store experience. Even though consumers admitted they were “pleasantly” surprised with the quality of the mass products, the ambiance didn’t live up to expectations — despite some chains investing millions in upgrading in-store ambiance. A number of mass-market retailers have already drafted strategies to fight back.

Walgreens is expanding its partnership with Boots brands, further upgrading fixturing, creating more new product beauty events and boosting training for its 26,000 beauty advisers. Walgreens also handpicked roughly 3,000 doors to receive a masstige beauty presentation highlighted by private-label brands, such as Colour Prevails and Circa. Walgreens is serious about building beauty since about 75 to 77 percent of its shoppers are female. “We already know they are not finishing the basket for some reason and we want to build out the portfolio,” Shannon Curtin, Walgreens group vice president and general merchandise manager, Beauty & Personal Care, explained.

Rite Aid is adding more service and curated lines, such as Eddie Funkhouser. The chain recently added Receutics, a private-label, clinically tested line of skin-care products. CVS is rolling out new sleek, black fixtures with a Sephora feel. Target is beefing up its beauty concierge program and adding specialty areas such as its derm skin care and a new exclusive nail gel from Orly.

Ingrid Jackel, president of Physicians Formula, said there are signs of improvement across the mass market. “The beginning of this year is far more dynamic than 2014,” Jackel said. She added the first 12-week period of 2015 showed a 7 percent gain in mass cosmetics with growth coming from the midrange and premium categories.

Jackel believes mass retailers sometimes send the wrong message to beauty consumers because they treat the business like a commodity. “This category thrives through newness and innovation. The beauty enthusiast is looking for excitement and choice on retailers’ walls,” she said. If that’s not offered, she reasoned, they’ll leave stores and complaints will persist that store traffic is low and shoppers aren’t connecting with the retailer.

Chain stores may be now upgrading, but specialty stores are winning the consumers, with venerable brands that resonate. “We are watching the expansion of specialty retail, like Ulta and Sally Beauty,” said Paco Underhill, founder of Envirosell.

Sephora — and perhaps soon Beauty Brands, which is led by former Ulta ceo Lyn Kirby — also nets a lot of mentions when asked where shoppers are headed.

Ulta, for its part, is on a growth tear. Under the leadership of ceo Mary Dillon, Ulta reached and surpassed $1 billion in quarterly sales for the first time during the three-month period ended Jan. 31, capping off a year in which profits surged nearly 27 percent to $257.1 million. Sales increased 21.4 percent to $3.24 billion from $2.67 billion. The company continues to expand aggressively, with plans to open a net 100 doors this year.

Kohl’s department store also is making a bigger play in beauty. It spent the last two years expanding the department to make room for more than 30 new brands, including Lorac, Cargo, Altchek MD and Bliss. The department is manned by an iPad-wielding beauty consultant at all times.

“Kohl’s has expanded its beauty advisers program to be in 80 percent of its stores and they’ve done a major renovation of skin and color cosmetics,” said Jerrold Rauchwerger, ceo of FSR Beauty Ltd., the manufacturer and distributor of Altchek MD.

More doors mean heightened competition. Compounding the situation, according to Karen Grant, vice president and global industry analyst at The NPD Group Inc., is that all beauty retailers are vying for a shrinking pool of shoppers. Nearly 6 million fewer women shopped for beauty in the U.S. last year, the lowest since 2008, according to NPD.

For the mass market in particular, Grant pointed to a slowdown across key categories as the culprit.

The slowdown of the once white-hot nail category hit the mass beauty business hard. Grant said in 2014, the mass nail business declined 4 percent to $1.4 billion, contributing to sluggish sales across the mass beauty department.

Mass retailers point to color cosmetics usage being down, the victim of a “less makeup is more mentality.”

Even though traffic was down last year, there is a glimmer of hope. Grant cited a recent NPD study that indicated 58 percent of women polled said they planned to shop in the mass market for beauty this year, compared with 54 percent in 2013.

There’s still tremendous potential in beauty — a high-margin business that for most drugstore chains is the number-two sales generator behind pharmacy and a top-five category for discounters.

“This isn’t a situation where there’s not consumer demand,” said James Russo, senior vice president, consumer global insights for Nielsen. “Ninety-four percent of households purchase beauty products [including personal care]. Beauty dollars are increasing in value channels such as grocery, dollar, warehouse and online, but beauty sales are not growing at mass merchants.”

There’s plenty more opportunity, said Russo. Retailers just need to know where to look. “There’s some nice low-hanging fruit rooted in the bigger trends that we see from an overall consumer perspective.” The first opportunity Russo identified is natural, where he said sales of natural/organic beauty products have soared an average of 24 percent over a four-year cumulative period (versus 2.7 percent for all beauty). Natural, he added, appeals to the much-sought-after Millennial audience. Another gap to fill, he said, is offering items for multicultural consumers. Russo said retailers who are limited in space would be wise to focus on the Hispanic market, where consumers spend 34 percent more on beauty than on other segments. The often-overlooked male audience is also huge, he said. “Men are heavily into three areas — skin, shaving and hair,” he said. “The biggest opportunity is men’s hair, which is gaining traction.”

Grant at NPD also encouraged mass merchants to play up the synergy between health and beauty. That advice is heeded at CVS, where its Minute Clinics consult and prescribe the eyelash growth serum Latisse. Liebmann advised retailers to take a deep dive into beauty using loyalty data to identify the best beauty doors and enhance the environment. For weaker stores, she recommended a “top of the line online experience,” so customers don’t stray. “You have to jump on the business quickly or lose the next generation to specialty stores or pure play online.”

Underhill said, “We learned during the recession that women are willing to cherry-pick products across mass and prestige categories. I don’t think that’s going away.”