The mantra at this week’s National Association of Chain Drug Store’s Marketplace meeting was affordable luxuries.

By Faye Brookman and Andrea Nagel on July 1, 2011
View Slideshow 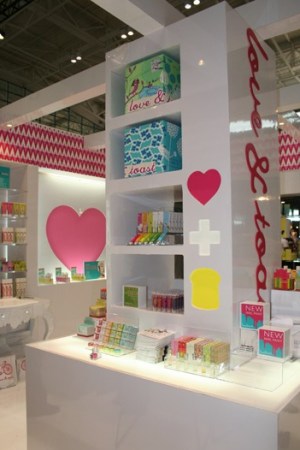 That was the mantra at the this week’s National Association of Chain Drug Store’s Marketplace meeting, held here at the Boston Convention and Exhibit Center and attended by more than 200 retail companies totaling in excess of 700 buyers as well as more than 450 suppliers. Together, they represent $500 billion in buying power.

Although consumers are slowly returning to stores, they are more frugal than ever and need to be wooed to part with their money.

The sour economy drove more beauty sales to the mass market; the goal at NACDS was to find ways to keep them there.

Retailers also are burnishing store images with upgraded prototypes. Joe Magnacca, president of Daily Living Products and Solutions of Walgreen Co. and president of Duane Reade, discussed a dramatic new Duane Reade layout that will launch in lower Manhattan next week. It will have a full nail color bar, some salon services, a brow bar and a sushi bar. Successful elements of Duane Reade’s Look Boutique also are being interpreted through Walgreens’ beauty departments.

Brands offered more upscale items to fit the new store looks. Love + Toast, arguably the must-see booth at the show, was founded by Margot Elena and is one of three brands she has in specialty shops, including New London Pharmacy and Ricky’s in New York. She is now exploring food, drug and mass distribution. Love + Toast is a natural brand, but it is packaged and positioned as upscale bath. “We want to add fun to natural,” said Mark Kuspa, global sales manager. “This is the future and the answer to the natural world, as it needs a facelift. We are setting new trends,” he said of the brand, which is being tested in Target.

Another fresh twist on skin care was on display from Performance Beauty Brands and its Grapes by Vineyard Collection. The antioxidant skin care line includes a moisturizer, body wash, body oil, sugar scrub, lip balm and hand and elbow cream. Stacy Kaufman, the firm’s president, said the bath category has gone up and down over the years, but Grapes has both functionality (formulas use “nutraceutical grapes”) and clever packaging resembling wine bottles to stand apart from competitors.

Beiersdorf is balancing innovation with giving proper support to strong existing properties. Magnus Jonsson, vice president of marketing, said in 2012 the brand will take some of its innovation spending and put it toward supporting some of its longtime best sellers. For 2012, Nivea is planning 23 new items, one of “its strongest pipelines in years,” said Jonsson. Beiersdorf will also be renovating products and concepts via new claims and packaging. Bath brand I Love… is attempting to bring affordable luxury to bath with fresh, fruity and tempting flavors of bubble bath and shower gel, lip balms and lotions that shake up the usual offerings of lavender, honey and almond milk. The brand is looking to go up against those in specialty bath, which include Calgon and Bodycology.

At Advanced Beauty Systems’ Bodycology, the newest buzz was over new lip glosses in three flavors retailing for $2.99 each. Bodycology, and many others at the show, said they are trying to bring Body Shop, Bath & Body Works and Victoria’s Secret-style products to mass. Bodycology is doing so with body butters and shimmers. A new flavor, Enchanted Forest, will soon be available as a lotion, gel and bubble bath and cream and mist.

Bringing back classics with a new twist was a show trend. Salon Selectives, now owned by Jack Wilkinson, is now positioned as a mid-priced to value brand. “We saw the brand with a lot of equity, and women seem to love it. They have memories of using it at camp,” he said. Currently, Salon Selectives is being sold in Walgreens, and aims to bring more value to the consumer with 32-ounce bottles for $3.49 each. The formula is the same, complete with the original apple pectin scent. “With the economy the way it is, this will appeal to the masses,” said Wilkinson.

Another brand name from the past, Borghese, is getting a new life in mass. Primary One Distributors has been serving the salon industry for 25 years and now has a brand of its own: The company has the exclusive rights for Borghese hair care in North America. Eva Theologus, vice president of sales, said the products are made in Miami and use patented formulas from Tuscany. The line includes 11 stockkeeping units, from shampoos to conditioner to styling items. Theologus expects the star to be the Styling Hair Spray, which can be pliable for up to 25 seconds after application. Price points will range from $15 to $20.

With shoppers looking to save where they can, several suppliers offered prestige-style fragrances at affordable prices. Patricia Hunter, director of sales for Victory Cosmetics, said fragrances in her assortment have done well at many chains. InStyle Products Group, which has sold designer alternative scents at Walgreens, is branching into a line for other retailers called Perfect Scents that will be available in the next few months in CVS Pharmacy.

As expected, do-it-yourself beauty items were also lures to buyers. CCA’s Gel Perfect, a UV-free gel nail polish that dries to a hard shell in five minutes, was singled out by Rite Aid, a chain known for leadership in nail. Pacific World also offers a gel product with a lamp to set the gel.

Nail care in general continues to be a huge category for mass retailers, with sales growing at a double-digit pace, according to SymphonyIRI data. Nicole by OPI, now owned by Coty, is looking to bolster its distribution in 2012 with a marketing campaign featuring The Kardashian family. The line is banking on the family to mesh with the younger set, thanks to Kylie and Kendall, as well as twentysomethings, thanks to Kim, Khloé and Kourtney, and of course for moms, using matriarch Kris.

Sinful Cosmetics, which is being helmed by industry veteran Paul Murphy as general manager, aims to offer on-trend colors while still maintaining its $2 price point. Sinful intends to operate as a wholly owned division of Revlon, separate from the glamour and fashion-focused brand, as Sinful has a value positioning.

Many retailers were glad to see a familiar face in Harvey Alstodt, the former president of Del Cosmetics who debuted his MBA brand with nail color as an anchor. The Confetti nail color is already a success in CVS Pharmacy, and now the company is rolling out other nail innovations, such as 10 Professional, Tweets and Pic-a-Colour.

Accessories also are getting more exposure in stores. Conair is launching two brush lines, Silk, which will retail for $4 to $12, and Pro, which will sell for $7 to $20. Conair’s Soho has already captured more than 85 to 90 percent market share in soft-sided cosmetics cases, according to the company. It currently holds 30 to 35 percent market share in hard cases, with goals of reaching 50 to 60 in the next year.

For some chains, it was all about something new and different. Vitry caught the eye of several buyers, including the Walgreens team, with its Swarovski crystal-encrusted nail files, which will retail in Duane Reade for $15 each. Paris Presents’ Ecotools line plans to continue to partner with vegan Alicia Silverstone. New colors for her branded makeup bags are planned for the next year, as well as new makeup brushes.