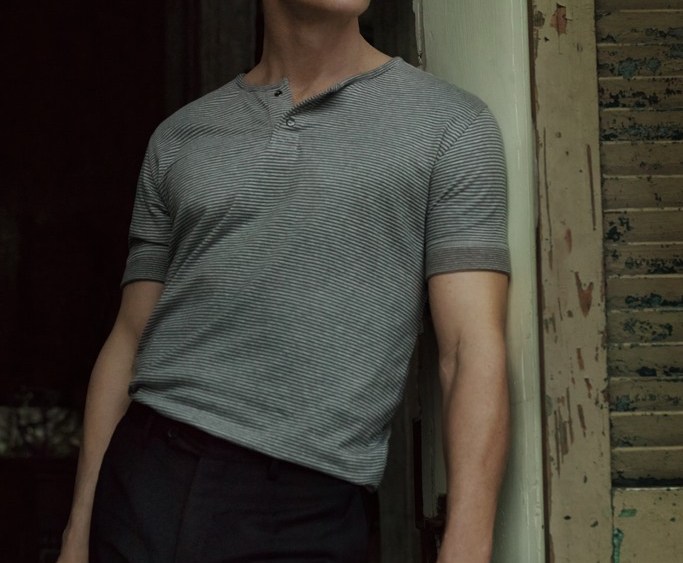 But this spring he’s going to encourage everyone to get dressed in his new line of men’s wear, called JKL.

The collection of active-inspired sportswear is named for McConaughey’s charity, the Just Keep Livin Foundation, which was founded in 2008 after the death of his father. The foundation is dedicated to helping kids transform into healthy adults by teaching the importance of decision making, health, education and active living. JKL sportswear and swimwear will launch exclusively in 150 Dillard’s stores next month and will be offered to other retailers for fall.

The collection is being produced by Grand National Apparel Inc., a Toronto-based private label manufacturer that works with brands including Perry Ellis and Savane.

“In 1992 my father moved on and Just Keep Livin came to be,” McConaughey told WWD in a phone interview from New Orleans, where he’s filming the HBO miniseries “True Detective.” “It was about keeping his spirit alive and remembering the things he taught me.” The tag line is a “compass for me,” he added, “and is how I approach life.”

Once the charity was formed, McConaughey started branding products with the phrase “Just keep livin” — everything from T-shirts and hats to cozies and flip-flops. He even named his production company J.K. Livin Productions. “It’s a good reminder for me,” he said.

It wasn’t long before friends and fans started asking for product sporting the phrase. Fast-forward to last year, when McConaughey sat down with his agents and decided it was time to “expand this brand in a more mature way.”

He was introduced to Grand National by one of those agents, John Frierson of Creative Artists Agency, and the conversation began. “We partnered up and thought, what’s the concept and the style and the gap we could fill?”

Jeff Otis, president and chief executive officer of Grand National, said his company wasn’t interested in doing just another celebrity line but was intrigued by McConaughey and his “active and adventurous lifestyle.” And when he found out that Just Keep Livin was going to receive a percentage of sales from the line, he worked up some samples to show to the actor. “A dime for every dollar goes to the foundation,” McConaughey said.

“We went to California and made a presentation,” Otis detailed. “We found out we were both in sync, and the charity would be the ultimate beneficiary.” It took about a year before all the details were hammered out, but the line is now ready to make its debut for spring, with a larger presentation planned for fall.

The collection is designed to be useful and stylish and is being positioned as “all-journey gear.” It will include performance features such as oil- and water-repellent pants; quick-dry T-shirts and moisture-wicking tops; UV protection, and rash guards.

“I don’t like to push reset,” McConaughey said. “I like to be able to wear something that is appropriate for wherever the day takes me: to work, on a hike and then out to dinner. I like to take the formality out of the day’s schedule and be ready for any off-road detour.” In fact, he said, when he was brainstorming about what an apparel brand could represent, he jotted down notes. “One of the first things I had written down was ‘from the jungle to the opera.’ That’s a bit of an exaggeration, but that’s the idea.”

He said that as an actor he has “worn a lot of designers in my career,” but he’s always second-guessing the fit. “If you’re wearing a button-down shirt, it could be too long to tuck in and too short to leave out,” he said. “Some lines are too narrow in the shoulders for a male torso, some pants have too high a rise in the front, others look good on you while you’re walking, but if you ride a bike or hike in them, they’ll restrain you.” So the job of JKL is to address these fit issues while still looking stylish, he said.

“This is my first adventure into the fashion world,” he added. “I’m enjoying it so far. I like working on the details, the design, the marketing. And I think the JKL philosophy is what makes it unique.”

Although McConaughey has been actively involved in the creation and design, it was intentional that his name is not on the label. “We decided not to throw him up as a celebrity,” Otis explained, “but as a brand ambassador.”

McConaughey said, “I want to be behind this, not in front of it. I’m the author, not the face or the definition.”

In fact, he “never once thought” of putting his name on the collection. “Even as a kid, I wore J.C. Penney plain-pocket jeans because they were plain pockets. I didn’t want anybody’s name on my backside. I personally don’t like to wear clothing that is named for somebody or has someone’s likeness all over it. Even if my name were on, I don’t know that I’d want to wear it.” Instead he puts JKL’s philosophy first. “I’m behind it, but people are buying something much bigger than that,” he said. “If they like the clothes and like what JKL is about, they can apply the philosophy to their own life.” Even so, in order to help fund the foundation and get the brand off the ground, McConaughey’s association will be evident.

Working with Platform Media, a logo, packaging, point-of-sale materials and a marketing plan were developed. Among the in-store efforts will be a six-foot tower with a picture of the actor, information on the foundation and details on the performance attributes of the brand. Clear-coated steel fixtures with steel blue accents, camp cots used as display tables and carabiners are included in materials. “It looks rugged,” Otis said.

The garments will have details about the foundation printed inside them.

Interestingly, McConaughey and William Dillard 3rd, vice president, went to the University of Texas together and actually had rooms across the hall in the dorm. “He was a Pike and I was a Delt,” McConaughey said.

Dillard said the two knew each other in school and recently got reacquainted. “He called me a couple of weeks ago, and we talked for 45 minutes and got caught up,” he said.

Knowing a Dillard certainly didn’t hurt, but the merchant said his men’s team signed on to launch the line because they believed in the collection. “It’s casual and sporty and looks different than anything else in the assortment,” Dillard said. “It’s a hybrid and kind of interesting, and it’s where people are going today in America.”

The line is being designed by Debora Annino, JKL’s Dallas-based creative director, assisted by a design team at Grand National’s offices in Toronto.

“It’s every-guy gear,” said Marla Baldassare, vice president of sales. “Outdoor-inspired sportswear with performance features.” Key pieces include the Killer Tee, a 100 percent cotton performance fabrication T-shirt that will retail for $29.50 and features a more tailored fit. “It’s slimmer with a more athletic fit,” she said. “It looks good, but you can also go on a hike in it. We look at it as everyday weekend wear.”

Otis hopes that once a consumer realizes the brand is not just another sportswear line but has performance features as well, “he will become a friend of the brand. And then layer on the social marketing and Matthew’s personal philosophy, and we think it will be very distinct.”

In addition to department stores, targeted distribution will include outdoor stores. International retailers will be included in the marketing push, Otis said.

“Matthew had a vision for the apparel that would fuse casual California lifestyle with performance features,” said CAA’s Frierson. “There was no brand that spoke to men like this. He believes there’s something missing in the market in the casual apparel space for active participants of life.” The target customer, he added, is a man between 25 and 35 who is looking for a brand that falls between performance apparel and casual men’s wear. “We hope we can get people to cross the aisle.”

However, turning the line into a success will be an uphill battle. Many male celebrities, including Sylvester Stallone and Kenny Chesney, have launched brands or put the wheels in motion, but none has stood the test of time.

“Grand National has made a big commitment and this is not a marketing one-off,” Frierson said. “They’ve put a lot behind development and Matthew is committed to the idea. We’re interested in building a business.”