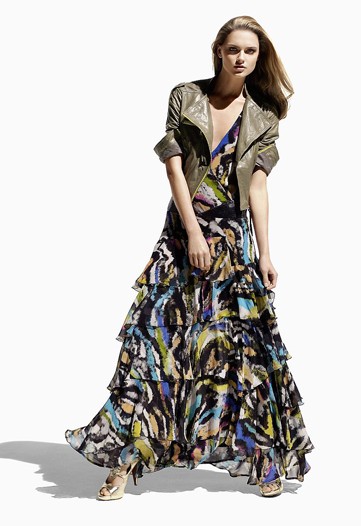 Matthew Williamson’s bright peacock feather-colored designs will strut around H&M twice this spring. The British designer created two collections for the fast-fashion retailer inspired by the brilliant blue, green and iridescent plumage of the swaggering bird.

The first, a premium, limited edition women’s collection, will bow on April 23 at 200 H&M units worldwide. Featuring cashmere, leather, sequins and embroidery, prices for the line range from $49.90 for shorts to $349 for a ruffle gown.

As an encore, H&M on May 14 will introduce a more populist collection of Williamson’s women’s and men’s styles in all the retailer’s 1,700 locations. This will be the first time a designer collaboration is available at all H&M stores.

“We like his signature style, colorful patterns and ethnic influences,” said Margareta van den Bosch, H&M’s creative director, of Williamson. “The huge interest that these collaborations garner means that often the collections sell out very quickly. We wanted everybody to have a chance to own some of the collection. In a new step, the second part will be available in stores for a longer period of time.”

An ad campaign shot in Tulum, Mexico, featuring Daria Werbowy and Williamson as the face of the men’s line, will promote the H&M collaboration. In Europe, there will be print and television spots.

“There’s a certain eclecticism to the collection,” Williamson said. “It was interesting for me to do the men’s wear. For the first time in 12 years, I could think of what I’d want to wear myself. I went to my wardrobe and picked out my favorite pieces and reworked things I’ve collected. The vibe is British boy on holiday in Cuba returning to England by way of Ibiza or one of the Greek islands.”

Asked whether customers of his signature collection will shop for his designs at H&M, Williamson said, “There’s a definite crossover in the aesthetic and the way women buy clothes now. It’s not about one singular idea or designer, it’s about mixing things up. It would be interesting to see a woman in both collections.”