NEW YORK — Ongoing retail consolidation doesn't seem to trouble James E. Maurin, who has a pointed way of depicting the fallout from such mergers and buyouts.

Traditional malls, excluding the strong super regionals and "A" malls, will... 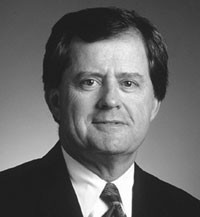 NEW YORK — Ongoing retail consolidation doesn’t seem to trouble James E. Maurin, who has a pointed way of depicting the fallout from such mergers and buyouts.

Traditional malls, excluding the strong super regionals and “A” malls, will ultimately house two or three department stores, compared with the four or five currently operating, said Maurin, chairman of the International Council of Shopping Centers, during a recent interview.

“Quite honestly, you don’t see any great panic by the mall owners,” Maurin added. “The mood is about as good as I have seen it in a long time. I believe we’ve had such a phenomenal run in the retail real estate world. It’s been pushing 10 years now. What’s so interesting about this moment in time is that some very strong, positive factors are driving both retail and property performance at the same time. The economy is growing, albeit at 3 to 4 percent, and department stores have righted themselves.

“A lot of the consolidation is very positive. I was much more worried about the department store industry five years ago than I am today.”

Anchor fatigue, and the accelerating rate of retail takeovers and consolidations — Federated Department Stores’ takeover of May Co., the Sears-Kmart merger, Saks Inc. selling stores to Belk — will be a big conversation topic in the corridors of next week’s ICSC spring convention in Las Vegas, May 22-25. Developers, too, were caught up in merger fever over the past year, with General Growth Properties Inc. buying The Rouse Co., and Simon Property Group buying Chelsea Property Group, among other deals.

Many in the expected crowd of 40,000 at the convention will be speculating on what retailer will be sold next, the fate of such venerable nameplates as Lord & Taylor and Marshall Field’s as they fall under different owners ready to streamline, and what properties developers shed or redevelop to cut debt and focus operations. “Back to Business” is the theme for the convention, but it might well be called “Anchors Away.”

“Property owners are taking lost anchors and converting them to lifestyle components,” said Maurin, who is also the chairman of Stirling Properties, a regional developer based in Covington, La. Stirling manages more than 7.3 million square feet, including open-air shopping centers and regional malls, as well as offices, industrial and residential projects. Stirling has more than $143 million of commercial property and over $138 million in residential listings for sale.

Reformulated properties provide space for restaurants, cafes, theaters and retailers like Wal-Mart, Target and Best Buy that haven’t been in or near malls before. Previously, lifestyle centers were inclined to contain big-box book or home stores.

While lifestyle centers have been around for decades, “the concept really started developing [staying power] in the last 10 years. Now it truly has traction,” Maurin said.

“A lot of department stores have shifted a portion of their new store inventory to lifestyle components. Half of Dillard’s [new] stores are going into lifestyle. Hybrid malls are getting built all over the country,” Maurin said. “There is a growing demand for other retailers that want to get around or close to the mall.”

There is also growing demand by rich private equity firms to buy up a lot of the retail in the malls and lifestyle centers. “With the Kmart-Sears sale and the Mervyn’s sale, we are seeing the investment world evaluate these retailers two ways,” Maurin said. “There’s the franchise value — what the brand is worth based on retail sales and profitability — and then a lot of retailers are being evaluated for their real estate. Many retailers have tremendous ownership in real estate, but even leases are valuable. Kmart was a great example. Who would have ever thought that Kmart and Sears would come together? As a brand Kmart tanked. Sears is still a very popular brand, but Kmart has some tremendous real estate.”

So when it comes time to consider buying a retailer, “investors look at every location.”

Aside from the rapidly changing retail real estate landscape, developers face other challenges, i.e., fickle consumers and erratic traffic patterns in the malls, high fuel costs, an economy that while still growing hasn’t delivered sufficient job growth and the threat of terrorism.

“Malls are much more secure today than before Sept. 11, 2001,” Maurin said. “There truly has been an investment in security personnel and technology, and in plans that were not there prior to 9/11. It’s real. Malls know exactly what to do,” in the event of an attack. “They have sat down with local officials and Homeland Security. Everyone has quietly made investments. A mall in a major urban market like Los Angeles compared to a small market like Baton Rouge has different issues, but the investments have been in proportion to the risk.

“Quite frankly, the ICSC has developed a communications system between the industry and Homeland Security. We communicate very well. Information is being passed back and forth. It’s technology, alertness, planning and communication.”

The threat of terrorism hasn’t dampened the desire to develop in foreign lands. Last month, Maurin was in Istanbul, at the ICSC Retail Real Estate World Summit on international development. It was attended by about 1,000 shopping center owners, developers and retailers from 60 countries, including 100 representatives from U.S. companies.

“Over the next five to 10 years, we will see all the major players, particularly public companies, moving overseas with projects and acquisitions,” Maurin predicted. “There is a lot going on below the surface. The hot spots are Eastern Europe, China and India.”

Western Europe, like the U.S., does not offer many development opportunities, he added.

Still there are untapped pockets in the U.S. that could be developed, particularly parts of Florida and Texas, Maurin noted. “All you have to do is follow housing growth. There’s tremendous housing growth.”

In Washington, the chairman of the ICSC lobbies on several issues, sometimes testifying before sub-committees and meeting with Congressional representatives. Being chairman is a one-year stint to provide policy guidance and direction for the activities of ICSC. The chairman presides at all meetings of the board of trustees. Charles Grossman, managing director at ING Clarion Partners in New York, has been nominated to serve as ICSC chairman for the 2005-2006 term. ING Group is a global financial institution managing $600 billion in assets, including $19 billion in real estate assets.

On the Washington scene, the passage of new bankruptcy law represents a big victory for property managers. For one, retailers will have less time to decide the fate of their bankrupt properties, and judges will have less latitude in extending the time for retailers to accept or reject leases. That means mall space productivity can be improved and vacancies won’t languish as much.

Before, retailers had 150 days to decide, but judges could give extensions and tended to be very liberal. While under the new law, retailers have 210 days, the judge cannot grant extensions unless the landlord agrees. According to Maurin, the change is good for retailers as well as landlords, since retailers also want more certainty about tenancies and adjacencies in malls.

Among the most pressing lobbying issues on the ICSC agenda cited by Maurin are: