Mavi Revs Up for Global Expansion

Mavi is making a big push into the U.S. with a new headquarters, wider merchandise mix, a relaunched Web site and fall ad campaign. 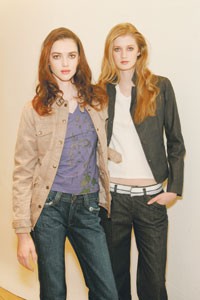 NEW YORK — Mavi has coasted through the denim category in a relatively hushed manner since its inception in Turkey 14 years ago and the U.S. launch five years later. Word of mouth seemed to be the driving force behind brand awareness — until now.

During the last year, the Istanbul-based company has made a strategic push into the U.S. market by shifting its design and marketing team to its new U.S. headquarters, a 7,000- square-foot office and showroom at 550 Seventh Avenue in Manhattan that opened in September. In addition, Mavi has widened its breadth to include more nondenim merchandise; relaunched its e-commerce Web site, mavi.com, and has kick-started a plan to open several freestanding stores worldwide while increasing its wholesale growth. To cap it off, an aggressive advertising campaign is scheduled for fall-winter.

“As the fashion denim market evolves,” said Ersin Akarlilar, chief executive officer, “we’re changing and making the brand fit that change. This has been the Mavi strategy from day one.”

The design team is split between New York and Istanbul. The U.S. group consists of five designers who mostly focus on conceptualization, while the six or so designers in Turkey concentrate on design and development.

“We try to use them all together but, at the same time, play off the strength of the individual,” Akarlilar said. “The design team in America has been very important over the last few years, especially when it comes to tops.”

A bonus of having a U.S. design team is that it means a better fit for the American consumer.

“It helps us not just do denim,” Akarlilar noted. Mavi launched a complete nondenim collection including T-shirts, sweatshirts, tops, knits and outerwear in 2004. The nondenim collection has had gradual growth, and consumers can expect to see eyewear, footwear and other accessories in upcoming seasons.

“I think our consumer has grown up with us a little bit,” said David Frankel, president of Mavi U.S. “We’re not the newest brand, but we’re trying to refresh our brand and image. Basically, there’s nothing more American than jeans. Even if Mavi tries to stay true to an international design aesthetic, this is the most important market in the world.”

Mavi is sold in 1,500 department stores and specialty boutiques in North America, with Nordstrom and Bloomingdale’s as its top accounts. The plan is to increase Mavi’s presence in existing markets, such as Europe and the U.S., while continuing to add markets, such as Australia, which the company broke into in 2003. Mavi also is seeking substantial growth through its own freestanding retail stores, which should number a dozen in North America over the next three to four years. There are three freestanding Mavi stores in North America in New York, Vancouver and Montreal.

“We’re not looking to be a retail company long-term,” Frankel explained. “We’re looking to be a brand.” The women’s and men’s businesses are expected to generate a wholesale volume of $200 million globally for 2005.

Mavi has gradually widened the collection and incorporated better fabrics and more expensive finishes to the denim, which inflated the price point slightly. Denim retail price points previously averaged at $64, while now they average at about $84.

“There’s nothing that makes a pair of jeans $300,” Frankel said. “That’s part of the challenge we face with women’s denim. There seems to be a mind-set that it’s not good if it’s not overly expensive.” The wholesale price range of tops is $15 to $30. “Our tops business is an exciting area of growth,” Frankel added.

The fall-winter collection will be highlighted in an aggressive advertising campaign. “Our voice in the advertising media had been pretty quiet,” said Paul Witt, director of worldwide marketing and communications, adding that the approach was more “directional” and “product-driven” in the past.

“I like to promote upcoming artists and photographers,” Witt said. The spring-summer 2005 campaign was shot by documentary photographer Jason Frank Rothenberg.

“We’re taking a more editorial direction for the campaign,” he said. The fall-winter campaign has been photographed by Isabel Asha Penzlien and will hit glossies such as Elle, Nylon, ID, BlackBook, Wallpaper, Flaunt, Fader, Vice and Metropop in September issues. While 40 percent of the marketing budget was devoted to spring, 60 percent was allocated to the fall campaign. The company is spending about 30 percent more on advertising this year compared with 2004.

Besides the ad campaign, Witt is also pushing the Mavi message with Maviology, a quarterly magazine produced by Mavi. An estimated 35,000 copies of Maviology are distributed worldwide; 20,000 of those in North America. The magazine has an international tone and includes articles on restaurants, travel, artists and musicians. The theme of Maviology coincides with the design theme of the season. Witt also is showcasing artists and photographers in the gallery beneath the Mavi retail store here.

“I’d like to spearhead Mavi in a new direction,” Witt said. “I want to kick it up at least 30 notches, and now’s the right time.”