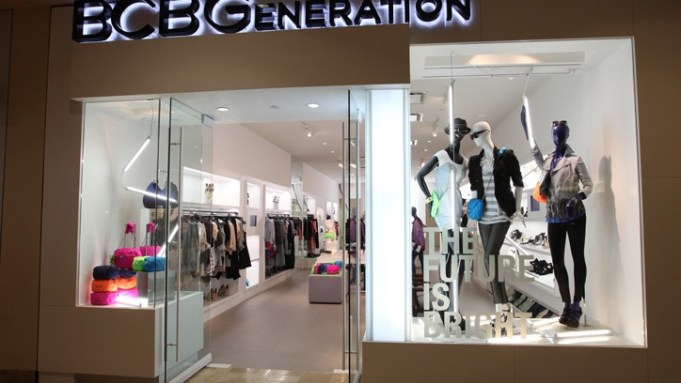 The first unit opened last week at The Shops at Mission Viejo here, with five more U.S. locations set to launch by today and another 25 to 40 by the end of the year.

The stores are about much more than clothes,” said Azria’s daughter, Joyce Azria, 28, Generation’s creative director. “We’re selling a whole lifestyle range of products, and a positive and happy shopping experience.”

The motif of the 1,775-square-foot store in this affluent beach community is a clean white gallerylike space with fluorescent light installations, movable racks and quirky objects such as vintage movie theater chairs and whimsical monkey sculptures. Girl power phrases in black lettering dot the walls and dressing rooms. The merchandise provides the pops of color.

In addition to its core apparel and shoes, the store carries branded handbags, sunglasses and smaller accessories, including nail polish, as well pop culture books. Jewelry will follow for fall, and a fragrance is in the works.

The 18-month-old brand has annual sales of $200 million for its wholesale business, which includes Macy’s, Lord & Taylor, Dillard’s and Bloomingdale’s. It “is exactly where we want it to be financially,” said Joyce Azria. “We feel fortunate to be opening stores right now. Even if it’s a few compared to our ‘big sister’ brand, it’s still significant for us.”

“Young contemporary is a price point that does great for us in this economic climate,” said Joyce Azria. “There is already so much apparel out there. Where do we want to be in that mix? Between an H&M and an Urban Outfitters? We’re offering fast fashion and wardrobe essentials that are affordable, but not disposable.”

Generation’s core customer is 18 to 25, and the brand plans to capture the technology-savvy audience with Facebook, YouTube and Twitter campaigns, including short films that invite customer interaction, to launch its stores.

Joyce Azria said the Generation retail experience will be set apart by elements such as personal attention, high-quality shopping bags and cardstock envelopes for gift cards and receipts. “At first my father said, ‘You are spending more on the paper than the clothes.’ But I told him, ‘You’re not going to walk away with a plastic bag here, whether you are buying three outfits or a nail polish.”