Former Luigi Borelli CEO has luxe line under his own name. 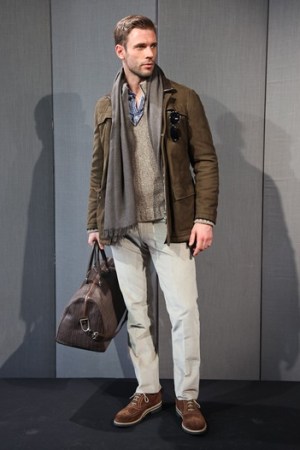 The former chief executive officer of the Luigi Borrelli business in North America has created a full collection of luxury men’s wear under his own name for the first time and has ambitious plans for a rollout.

Speaking before a preview of his fall collection last week, de Corato described his lifestyle collection as “modern but with an old sensibility.” The looks are inspired by the stylish men he encountered while traveling through Italy — places such as Café de la Poste in Cortina, Italy, and La Scala in Milan. “Each of these cities bustle with the most elegantly dressed men in the world,” he said. “I love the charm of la dolce vita.”

Although the price points put de Corato in the luxury category, the line is holding its own during the recession. “My customers stayed with me,” he said. “And this year, we’re up 9 percent.” The line attracts ceo’s, lawyers, actors and broadcast anchormen, he said. It is targeted to a man in his 20s or 30s and features form-fitting, European-inspired silhouettes.

Although de Corato sells a few pieces at wholesale right now, the focus is on retail. When he first converted the Borrelli stores — which he owned — to de Corato last year, they carried multiple brands. But as the collection grew, the number of outside labels decreased. The stores are now primarily de Corato but also include a smattering of other luxury brands, including Cesare Attolini, Kiton Sartorio, E. Marinella, Borrelli and Longhi.