Traditional apparel items expected to lead the way as business continues to strengthen. 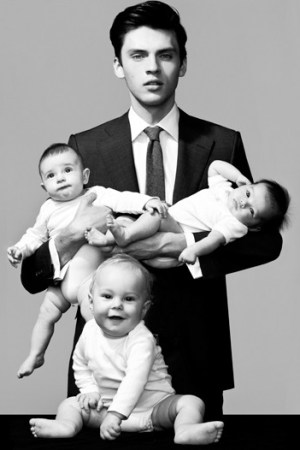 There’s been no hiccup in the men’s wear business.

After a strong holiday season in 2010, men’s wear sales have continued to gain steam this year, outpacing women’s. According to MasterCard Advisors SpendingPulse, men’s apparel sales rose 12.4 percent in April, more than the 7.4 percent gain posted by women’s wear and the strongest growth in the category since May 2007. The NPD Group Inc. reported men’s sales rose 12 percent for the three months ending Feb. 28, on top of a 3.3 percent gain for 2010.

“This is a very healthy growth rate and a clear sign men are looking to rebuild their wardrobes,” said Marshal Cohen, chief industry analyst for NPD. “Based on what we are seeing in the recent market data, the categories that are going to prosper are those that are a combination of basics and replenishment as well as some impulse and fashion categories.”

And with Father’s Day right around the corner, men’s merchants are anticipating a further uptick in business. Although projections for this year are not out until the end of May, the National Retail Federation’s 2010 Father’s Day Consumer Intentions and Actions Survey, conducted by BIGresearch, said the average person spends $94.32 on the holiday, while the organization estimates spending during the holiday period averages about $9 billion a year.

With numbers like that, it’s no wonder department and specialty stores are eager to grab their piece of the pie.

“It was a sensational first quarter,” said David Fisher, senior vice president and general merchandise manager of men’s wear for Bloomingdale’s. “We were up strong double digits to last year and up single digits over plan.” He said the denim business has “bottomed out,” and although not at the same level as a few years ago, is “showing some growth again.” Fisher also pointed to “updated classic collections,” such as Burberry, Tahari and Michael Kors as strong sellers. John Varvatos and the newly added Billy Reid collection are also doing well.

“We’re also getting some good reaction to young men’s collections such as Star USA, Woolrich and Shades of Gray,” he added. “But the two biggest drivers have been tailored clothing and dress furnishings. The shirt and tie business has been very strong for the last two months.”

As a result, Fisher said he’s expecting Father’s Day this year to revert back to tradition, with shirts, ties, cuff links and small leather goods being purchased as gifts. Colorful shirts, ties and pocket squares from Duchamp and Turnbull & Asser will be popular, he predicted, “and the mainstay will be sportswear,” including nondenim bottoms such as colored khakis from Dockers, regular khakis from Ralph Lauren, and woven shirts.

Matthew Singer, men’s fashion director for Bloomingdale’s, expects this Father’s Day to be “all about hanging out and having fun — great comfy sweatshirts, cool cotton suits to wear over a polo, great boat shoes.” He said dads today don’t need another basic polo shirt, but are seeking something “lived in, such as long-sleeved Henleys and chinos. It’s all about easy living.”

And it’s also about dressing up at work. “Competition in the workforce is tough so you’ve got to look the part,” said Singer.

He is expecting novelty gift items such as Polaroid’s GL10 Instant Mobile Printer from the new Lady Gaga Grey Label line to lure shoppers as well. “It’s a really innovative gadget,” he said of the item, which can wirelessly print photos sent to it from a compatible phone.

Jonathan Greller, senior vice president and general merchandise manager of men’s for Lord & Taylor, has also seen the men’s business maintain the strength it showed over the holidays. “It has held momentum,” he said. “It’s trending with the store or above. And we see a lot of opportunity.”

The best performers are tailored clothing and shoes, he said, which had “a terrific first quarter” and the trend is continuing into the second quarter. “This just validates that men are shopping,” he said. “Men are more fashion conscious and savvy and taking an interest in what they’re wearing.” He said the store “will continue to be aggressive with Black Brown 1826,” the store’s private brand that is “outperforming” other labels in the men’s area. Additionally, the men’s sportswear business has been strong, he said, with Polo, Hugo Boss, Calvin Klein and Nautica all “terrific.” In clothing, Lauren, Calvin Klein and DKNY are the top sellers.

Greller is hopeful the strong trend will continue for Father’s Day business, and actually “exceed expectations. We’re feeling very bullish, but we’re still cautious. The consumer still wants value so we’re still showcasing the price-value relationship.” He anticipates that short-sleeve knits, dress shirts and neckwear will do well, along with woven sport shirts that can be worn casually or dressed up.

Mike Nemoir, senior vice president and gmm of men’s for The Bon-Ton Stores Inc., said the cool, damp weather so far this spring has cut into sales a bit. “Our spring hasn’t been as strong as the fall because our stores are in a northern climate,” he said. “And our inventories are spring-driven.”

Nevertheless, he characterized business as “decent,” and said it picked up this past week as the temperatures warmed up. Long-sleeve woven shirts are the strongest classification, he said, across all categories — moderate, better and young men’s. And suit separates are also doing well, driven by private brand and Kenneth Cole Reaction. “And we’ve had decent success in flat-front dress pants from Kenneth Cole and Calvin Klein.”

For Father’s Day, Nemoir is upbeat. “We feel we’re well-positioned. We’re looking to get our share of the market,” he said. “We did a post-mortem last year and implemented and improved upon what didn’t do well.” This resulted in more emphasis on short, performance golf knits and gift items. “Our assortments are right, our marketing is better and our stores look good, so we’re pretty optimistic,” he concluded.

David Zant, executive vice president and head men’s merchant for Belk Inc., said, “Men’s sales have been strong for the first quarter, and we expect to carry that momentum through Father’s Day. Our clothing and furnishings areas were exceptional, with strong pre-Easter sales. Key trends include seasonal categories such as seersucker, chambray and washed linen in sport coats, and cotton khaki suit separates. Bright colors have trended well and propelled the dress shirt and neckwear business. Best colors have been aqua, green, and melon. Bow ties continue to be a factor, contributing over 10 percent of total neckwear sales.”

“The men’s better collection business has also performed very well spring season-to-date, and we think will continue to be a leading growth area for the remainder of this season,” said Zant.

Tom Whitney, gmm of Darien Sport Shop in Darien, Conn., said the store’s men’s business so far this spring has been “a pleasant surprise.” A newly installed HMX boutique has connected with customers, with Hickey Freeman, Hart Schaffner Marx and Bobby Jones selling well ahead of last year. Peter Millar is showing growth and the biggest brand in the store right now is Vineyard Vines. “The business is almost double to last year,” he said.

Whitney is expecting Father’s Day sales to be even stronger, with a little help from better weather. “We need to get an 80-degree day to get men out shopping,” he said. He is projecting low double-digit growth for the holiday. “Anything else would be disappointing.”

Butch Blum, owner of the specialty store of the same name in Seattle, said his store has posted increases for seven consecutive months. “It was good early on, but April and May are even stronger than the first quarter,” he said.

Blum said the store is doing well with sportswear, including five-pocket casual pants, as well as knit shirts and sweaters. “Wovens are coming back after a dry spell,” he added, “and soft sport coats are doing well.”

Looking ahead to Father’s Day, Blum said his “best educated guess would be more of the same. Typically, Father’s Day is not a big deal in our store, but we will be more aggressive this year to try to drive business.” For Mother’s Day, he installed special windows to provide “suggestion” for those seeking gifts, a tactic he will most likely take on Father’s Day as well. “There seems to be pent-up demand and people are responding,” he said.

While Blum is optimistic about the state of the business, he pointed out: “We all need to keep this in perspective. These numbers are based on last year. We’re not back to the peak of 2007, so we have to be cautious about how we return to glory.”