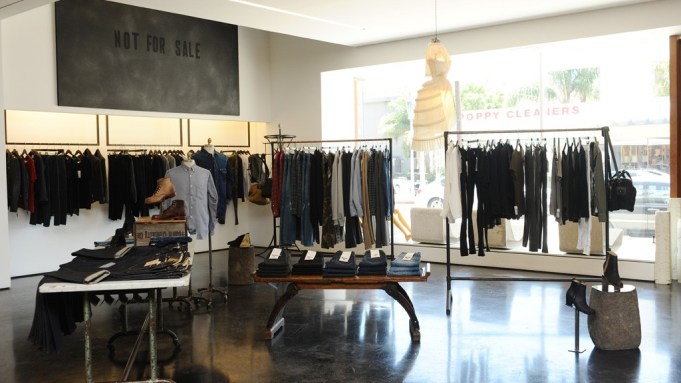 After 24 years of peddling women’s fashions out of his Madison stores in Los Angeles, owner Mark Goldstein decided it was about time he sold something he could wear.

Officially opening Aug. 8, Madison Mens Shop takes over 800 square feet at a space on West Third Street next door to a Madison women’s boutique that Goldstein transformed into Madison Gallery, a women’s designer and advanced contemporary destination, in 2011. Two years earlier, it started as Diavolina. This will be Madison’s eighth store, joining locations that dot posh neighborhoods across the L.A. landscape from Brentwood to the Pacific Palisades.

“It wasn’t because of a money-making opportunity. I wanted it for me,” said 52-year-old Goldstein. “If it’s successful, it’s successful. I’m not trying to please the market, but I think the market will react favorably.”

The assortment will dabble in suits, but mostly stick to casual fare, and the apparel, shoes and other accessories will contain a mix of American, European and Japanese brands, with an emphasis on those that cultivate an American look. Some of the brands are Rag & Bone, Save Khaki, Acne, Closed, Surface to Air, Sunny Sports, Mason’s, Kitsuné, Canada Goose, BLK DNM, 3×1, Golden Bear, Red Wing, Clarks, Quoddy, Wolverine, Filson, Garrett Leight, Golden Goose, Levi’s Vintage Clothing and Levi’s Made & Crafted. The color palette will be largely black, white, navy and gray.

Goldstein described the design sensibility of Madison Mens Shop as edgy Americana. “The edgier guy is doing the preppy thing with a twist today,” he said. “I don’t want to call it preppy. Preppy gets cool every once in a while. I dressed that way in college. At high school in Beverly Hills, it was flared jeans with Lacoste shirts. In college, Polo was becoming big. I’d buy boys’ Polo shirts at Saks and started wearing Top-Siders and things like that. It was late Seventies, early Eighties. That look is hip again, and I like it, if it’s done in the right way.”

Goldstein is steering clear of designers such as Balenciaga and Saint Laurent to keep prices down and make Madison Mens Shop a place to buy an everyday wardrobe. He singled out Save Khaki, which he estimated sells shirts for $135 and pants for $115, as an entry-level price point brand at the store. But Goldstein also isn’t afraid of stocking pieces from the upper end of the category below designer. Once they are educated about the products, he believes L.A. men will feel comfortable investing in pieces that may cost more than they are used to spending.

“I think the way we buy will appeal to a wide range of people — a skater-punk kid or a well-dressed architect or a celebrity who wants a great-quality jean,” said Goldstein. “When I go out to dinner, people aren’t wearing Saint Laurent. They’re not wearing suits. They’re in high-quality casual.”

Madison’s women’s stores are generating annual sales per square foot in the $1,000 range, and Goldstein noted that the business now is flat with last year. “Since the recession, it’s been a progression upwards, but still not where it was. Since the election, this is the first time I’ve seen it go backwards,” he said. At Madison Mens Shop, he continued, “I think we’ll be comparable to the women’s. It will take time. My expectations aren’t $1,000, but I think we will get there.”

Although Goldstein isn’t diving into men’s retailing because of recent growth in the men’s category, he acknowledged it was a nice break from the intense competition in the women’s retail sector, where Madison has had to cope with Intermix and Scoop NYC spreading in L.A. with similar brands to Madison. “The men’s market is not nearly as oversaturated. That’s a nice feeling,” said Goldstein. “I’m just buying for me, my point of view. I think a lot of guys will come in and identify because it’s really focused. A lot of guys will be ‘that guy.’”