The days of hanging reams of suits on racks against a wall are over — at least for savvy retailers seeking to attract the dapper young customer. 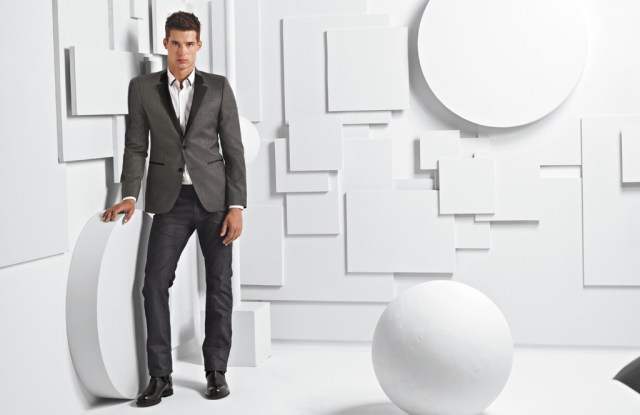 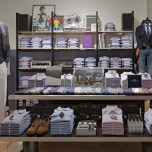 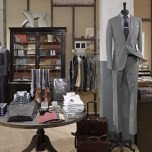 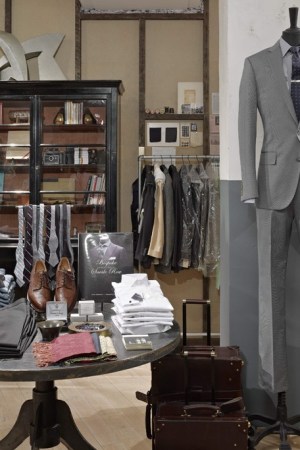 The days of hanging reams of suits on racks against a wall are over — at least for savvy retailers seeking to attract the dapper young customer who has been the catalyst behind a sea change in the tailored clothing business over the past several years. As young guys embrace dressing up, suits and sport coats have slimmed down, making old wardrobes obsolete. These men are also surfing the Web for ways to customize their wardrobes, seamlessly mixing sportswear and traditional tailored clothing pieces to create their own individual style.

As a result, retailers — led by specialty stores and a few trend-setting larger merchants — are increasingly blending brands and categories to appeal to this customer. The new merchandising strategy is also having a trickle-down effect on the more established — read “older” — customer who is being spurred to update his wardrobe.

One of the leaders has been J. Crew, which introduced its slim-fit Ludlow suit model in 2008 when it opened its first stand-alone men’s store in New York City. From the beginning, the suit was merchandised next to complementary merchandise such as Macintosh coats, Levi’s jeans and Alden shoes.

“When a guy comes in and wants a suit, particularly his first suit, we don’t want him to be intimidated,” said Frank Muytjens, vice president of men’s design. So the Ludlow offers a consistent fit — slim — in a variety of fabrics in a “tantalizing environment, so it’s very relatable. We try to make his life as easy as possible.”

It worked and, today, the suit has spawned its own two Ludlow stores in New York and Boston as well as shops within all of the company’s men’s stores. “We tested it and it just created a ripple effect,” Muytjens said. In terms of merchandising, “it’s still a suit shop, but we mix high and low. He can wear it with a white shirt and a tie or experiment by wearing it with an army belt, a denim shirt and sneakers. It doesn’t have to be completely serious.”

This type of merchandising is also being seen in more traditional stores.

“The lines have blurred between sportswear and tailored clothing,” said Dan Farrington, general merchandise manager of men’s wear for the Mitchells Family of Stores. “We’re merchandising tailored more as collections than ever before. And even where we don’t have shops, we’re buying it as a total look.”

He pointed to the “beautiful jackets” that are being produced by Brunello Cucinelli, Loro Piana and others that can’t be classified as strictly tailored clothing. “Even our Cucinelli suits will go in with collections,” he said. “We’re merchandising them more casually; they’re not just being hung in the tailored clothing area.”

Even so, “for practicality, we still have a tailored clothing area. We still do a lot of volume in tailored and if a customer comes in looking for a suit, he can just go there. Guys still have to wear the uniform and for those who have to, it’s easier to shop in a tailored area.” But for those men who opt to wear a suit as a personal choice, they’re more apt to mix casual and dressy pieces and gravitate toward suits and sport coats in a collections presentation, he said.

Overall, Farrington said the tailored business has been “better over the last two years than we had expected. The growth in jackets and suits has been strong.” He’s expecting that to continue. “We’re still not as far along in the fit cycle as some think we are,” he said. “There’s still updating to be done. Men evolve very slowly.”

Eric Jennings, men’s fashion director for Saks Fifth Avenue, said over the past six months, the store has merged clothing and sportswear from its key vendors into single shops instead of separating the two as classifications. “We now have lifestyle shops,” he said, noting that the classic vendors are on the sixth floor of the flagship while contemporary brands are housed on the seventh floor. “We have no suit department.”

He said the Saks customer is “brand conscious. He knows what he likes and what fits him so he’ll go to that brand.”

He’ll also mix and match. “The younger customer is more comfortable hopping brand to brand and will wear a Z Zegna topcoat with a great piece of denim,” he said.

Saks’ clothing business is still doing well, led by a double-digit increase in made-to-measure sales. “There’s been such a dramatic shift in the length of the jacket and fit of the trousers over the past three or four years. And men’s eyes have now adjusted to the slimmer silhouette,” he said. “For those who haven’t done it yet, it means it’s time to upgrade their wardrobe.”

Wally Naymon, owner of Kilgore Trout in Cleveland, has also updated the merchandising in his store. “It’s not about putting sleeves on the wall,” he said. “We’re showing not only the young guy, but also our core customer a different way to wear clothing.” In addition to using faceouts and T-stands, the sales staff will lay out suits with denim, knits and updated neckwear in order to spur sales. “There’s a whole revolution in his closet,” Naymon said. “The young guy has spurred this on, but it’s working on his dad, too. The dad today wants to look like his son.”

Naymon said tailored clothing sales haven’t been this good in a long time, and the business is coming from both new and more-traditional brands. “We’re a core Zegna/Canali store, but we’re also gotten traction with Z Zegna, Paul Smith and Etro. And we’re buying our classic brands differently and more aggressively to encourage growth in the closet. When he puts on the shorter, trimmer lengths, it’s new and fresh and he gets excited.”

Naymon expects the strength to continue into next year. “Many men don’t buy every season or every year, so there are still a lot of guys who haven’t gotten into the new stuff,” he said.

Express has also created a strong business in suits and separates over the past few years as the young shopper hits its stores to dress up his wardrobe for work and after work.

The assortment for men starts with its IMX range of stretch dress shirts in a wide array of colors. “It’s a focal point for us,” said Toby Jackson, senior vice president and gmm of men’s. “We will show ties hanging under shirts for ease of shopping.” That works well with the company’s suit assortment, which Jackson said has been “growing over the past three years as young guys dress up.” He said about a year ago, the retailer added “suiting pods” to its stores where its Producer modern silhouette and Photographer slim model are showcased, along with accessories including tie bars, pocket squares and shirts.

“We’re speaking to the young guy through presentation,” he said. The stores may also add an Express Tech coat that has a tailored appearance but includes technical details or a stretch cotton dress pants to spur sales. “Our guy doesn’t have a lot of disposable income, so he wants to mix and match,” he said.

Jackson too believes the future is bright. “There’s a lot of media attention today and it’s really influencing guys to dress up. So I think it has a significant amount of legs. I don’t see any slowdown in that category of business.”

Manufacturers have adjusted their design and merchandising as well to appeal to this new shopper.

John Minahan, division president of sportswear and ready-made product for IAG, said that three years ago the company introduced Gitman Vintage, an updated version of a venerable dress shirt brand. “It was authentic American product redirected to and by the next generation,” he said, a generation that is “very fond of heritage.” IAG is targeting its Corbin tailored clothing to that same customer. “We put it on the same path as Gitman,” he said. “Instead of staid and classic, we built it for a younger generation. We call it a blended classification strategy.”

Key pieces include unconstructed sport coats with tailored construction that can double as an outerwear piece or Shetland jackets with a pine paisley lining. “That appeals to the utilitarian portion of a younger generation. They dress like women dress — sartorial one day and washed down the next. They’re not addicted to anything and every item has to appeal to them for what it is.”

Bob Denton, president of Oxxford, Corbin’s higher-priced brother at IAG, said that despite his brand’s high price point — $4,000 or so for a suit — it too is attracting a young customer. “The young guy is very curious about better tailored clothing,” he said. “They’ve seen their fathers or their peers wearing it, and they’re willing to pay for it if we can deliver what they’re looking for.”

In many cases, this leads to made-to-measure, which allows the man to completely customize his garment. “They’ve read about Savile Row and this is the American version of it,” Denton said. “And if they’re going to spend $5,000 on a suit, they want it their way.”

Denton said Oxxford’s business continues to be good and he attributes that in part to new merchandising techniques in-store. “There used to just be a sea of sleeves, but things are changing.”

Anthony Sapienza, president and ceo of JA Apparel Corp., agreed. “Retailers are struggling to make shopping an experience, and they need to reinvigorate that experience, especially for the younger guy.” That translates into more mannequins on the floors, and “more adjacencies between sportswear and clothing. If it looks cool, it will attract a younger shopper to go in. There’s clearly a shift.”

In the past, stores looked like “bunkers,” he said, “with suits so crammed together you couldn’t even get them out. But today, things are much more modern. People feel good wearing tailored clothing, it defines maturity and a lot of guys haven’t had that experience.”

Design is changing to address this new shopper. Bernardo Rojo, designer of JA’s Joseph Abboud label, is offering more “hybrids” featuring fabrics and details that serve more than one function. “Even if they’re wearing a suit, it can be made sportier by the shirt they choose or if they wear a cardigan underneath. We are a clothing company, but we’ve evolved the collection.”

Chuck Lucia, senior vice president of sales for Hugo Boss USA and Canada, said that merchandising its tailored offering as a collection has led to multiple sales. Today’s customer is “making the rules, they’re not making him. He likes to break up a suit and get a lot of life out of it. It used to be just nested suits, but now he’s wearing the blazer alone, the trouser alone, or the suit all together. Our shops encompass that ‘world of’ philosophy.”

He summed it up this way: “In the last two years, tailored clothing has changed dramatically. Guys don’t want to dress like their dads. They want to have fun with tailored clothing and that’s how it needs to be sold.”