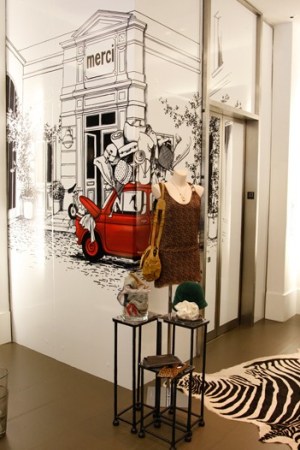 Just a little thank-you is how one might describe Merci Gap, New York. A diminutive version of the Parisian concept store, Merci, shrunk from 15,000 square feet to 500, makes its Stateside debut today in the form of a pop-up shop, courtesy of Gap. Much like last year’s run with Colette, another French specialty import, Gap tapped Merci for a monthlong residence at its raw space at 680 Fifth Avenue at 54th Street. “It was actually something Marka Hansen [president of Gap, North America] had read about,” said a Gap spokesperson. “She was very inspired by the idea of Merci, its philosophy of democracy, the idea of simplicity and quality and the idea of the charitable side of the business, as well.”

Indeed, while the sprawling French flagship, situated in the Marais, is replete with homewares and clothes sourced from under-the-radar designers and has a library and cafe, at the center of Merci is philanthropy. “What I have is what I give,” is emblazoned in French on a cotton T-shirt ($28), available in the pop-up store, which describes husband-and-wife owners Marie-France and Bernard Cohen’s philosophy. “We had a reflection: What is going to make ours a lovely life?” said Marie-France. “What makes us happy is to be enterprising….The idea [for the store] was, at the end, if you make success, you make money. And the money — we won’t take one cent of it.”

Once the bills are paid, Merci’s profits go to children’s charities. (As for their own funding, the Cohens had founded the upscale French children’s label Bonpoint some 30 years ago and sold it in 2003 for a sizable sum that made the new store possible.) And it’s not your typical T-shirt-for-a-cause model. “Charity businesses are always one-shot wonders,” said Marie-France. “My idea was to have something very fashionable, very trendy, very new.” Among the imports to the New York pop-up, appointed with a chic gray color scheme and a mural by Clement Goutal, are candles from Annick Goutal ($39); tableware made of sugar pulp by Japanese brand Wasara ($15 to $21), and pewter-rimmed porcelain plates by Cosi Tabellini ($65 to $85).

Limited edition Gap tie-ins include T-shirts and splatter-painted jeans by French artist Laurence Amélie ($149) and limited edition trenchcoats designed by French illustrator Soledad ($295). “We’re very enthusiastic to bring more new designers,” said Marie-France, who was off to find more stock at the Brimfield Antique Show in Massachusetts. “Things that you don’t have in New York.”

In addition, there are paper products and vintage items of the ultraluxe variety, such as Alaïa boots from the Nineties and a Dior dress from the Fifties. Pricy as those may be, the Cohens pride themselves on their democratic approach to prices — the range at Merci Gap is $3 to $3,250, and everything in the store, including the vintage display cases, is for sale.

Despite the dour economy, Marie-France is confident of the store’s potential. “I’m a sick optimist,” she said. “I think we’ll sell everything.” As for plans for another Merci, it depends. “I would have to find people who are talented and rich,” said Marie-France. “People like us.”