By Rebecca Kleinman on May 23, 2005
View Slideshow 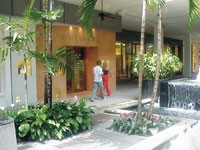 Miami says bring on the bling.

From fetes hosted by jewelry houses to the opening of Harry Winston at Bal Harbour Shops in Bal Harbour, Fla., the fine jewelry market is complying with the city’s transformation into a world-class destination.

Bulgari’s cocktail party and performance by opera singer Sasha Lazard to introduce its Sapphire Flower Collection here in April was held in the up-and-coming Wynwood neighborhood, but it announced that Miami has already arrived on the company’s radar.

“The market was hungry for the brand,” said a Bulgari spokeswoman. “It was an immediate success with both the local and South American clientele.”

The company operates a store in Bal Harbour Shops. There is also a shop-in-shop at Saks Fifth Avenue in Dadeland Mall in Miami.

“The customer is generally younger here — both in age and attitude,” said the spokeswoman. “[They are] a fashion-forward mix of Latinos, Europeans and locals, many with dual residences in the Northeast or South America.”

Jim Seuss, president of Harry Winston, said the company chose Miami over other locales, including Palm Beach, to open its ninth store in order to reach a new audience that participates in sophisticated events such as Art Basel.

“Miami has that vibrant, international market we look for,” he said, adding that it has an existing business in Palm Beach through private sales visits.

Slated to open in November, Harry Winston’s 1,000-square-foot Bal Harbour Shops store will carry the entire collection, including the full bridal and watch

divisions. Since Miamians appreciate color, there will be rare emeralds and rubies and interesting variations of diamonds in pink or blue.

Cartier president and chief executive officer Stanislas de Quercize said the company has always had an affinity for Floridians, evident through its sixth retail venture in the state, a boutique in Naples, opening this year.

“There’s a fit between us,” he said. “They like our sunny yellow gold and beautiful stones. It’s a fun, social place, which is what we are.”

The store in Bal Harbour Shops opened 26 years ago and was renovated in 2004. Miami’s bestsellers are Cartier watches, favored by Latinos, said de Quercize, less formal jewelry and colored stones such as those used for the Meli Melo and Delices de Goa collections, which retail for between $3,900 and $36,000.

“[Miami residents] embrace newness quicker than in other places,” he said.

A Palm Beach mainstay since the Sixties, Van Cleef & Arpels wasn’t attracted to Miami until 2000, when it also opened in Bal Harbour Shops. The two stores’ customers are different, said Nathalie Guedj, president and ceo of Van Cleef & Arpels.

“Palm Beach is very American and Caucasian, while Bal Harbour is 50 percent American and 50 percent international tourists who just don’t go to Palm Beach,” Guedj said. “Even the Americans are different in both places, though.”

Guedj said Miami, with its glitzy nature, took to the jewelry immediately. With the exception of brooches, which are more popular in other markets, such as New York, and the Frivole collection of yellow gold, diamonds and patent leather, which performs better in Miami, she said merchandise generally sells at the same pace throughout all locations.

“We have a very refined Latin crowd in Miami that’s into jewelry at a higher level than many Americans,” said Guedj.

Scott Maroon, Florida boutiques manager for Chopard, also observed a heightened interest in pricy jewelry in Miami, compared with the other six U.S. cities where the company has stores.

“It provides a setting that speaks for itself,” he said.