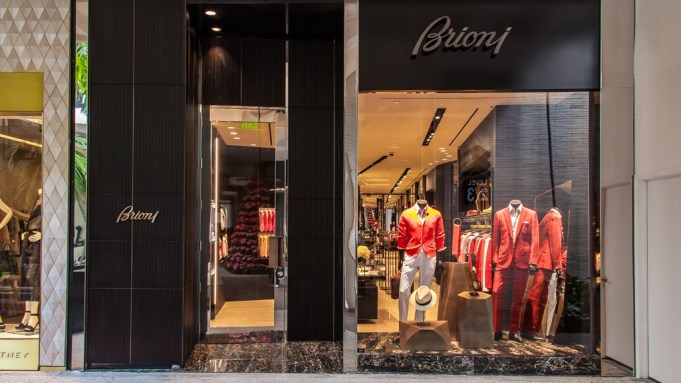 MIAMI — For a city whose homegrown TV series inspired a nationwide men’s wear trend in the Eighties, Miami had fallen short in the category for decades. Retailers focused on their women’s business while embroidered dress shirts worn untucked with designer denim became the male fashion uniform. But a growth spurt in the men’s market of late has resulted in a rash of new boutiques and store expansions catering to this forgotten sector.

“My guy friends in Miami complained about not having sophisticated shopping, that choices were limited to superdressy or supercasual,” said John Varvatos, who launched his third Bowery NYC concept store on Lincoln Road earlier this month. “We hope to fill the better men’s void and bring dynamism to the area’s heavy concentration of clubwear.”

A frequent visitor to the city (it’s good to have a brother-in-law who owns the W South Beach), the designer has the inside vantage point on lifestyle observation. As a result, the new store draws from the company’s trio of divisions — Collection, Star USA and Converse by John Varvatos — for its climate-friendly knits, pastels and treated linens, as well as the brand’s leather jackets and burnished suede shirts.

“I spent a great deal of time studying the local customer. I didn’t want to just dial in the tourists,” said Varvatos, who had a head start through his shop-in-shop at the Atrium boutique on nearby Collins Avenue. “Since that account isn’t on a heavily trafficked shopping block, our store will strengthen the brand regionally.”

Varvatos believes the Miami area can accommodate other stores and expects to eventually add a John Varvatos Lifestyle unit, the brand’s more high-end concept, in the Miami Design District “when it’s progressed a bit, or Bal Harbour with its addition, in the next couple of years,” he said.

Bal Harbour Shops has emerged as a top men’s destination. In 2012, Canali opened its second Miami location there alongside tenants such as Kiton, Brunello Cucinelli, Ermenegildo Zegna and Brooks Brothers. Brioni, whose original door opened in 2007, relocated and doubled its size to 2,000 square feet in early April. Its bright coral sport jackets and cardigans pop against the sleek-meets-soft store design based on a Los Angeles prototype. Muted silk panels of stitched diamonds that emphasize its made-to-measure program, and ribbed walls and displays of matte black wood soften bronze frames, black glass and pale stone flooring.

“We’ve had nothing but consistent growth right into the first quarter of 2013,” said Todd Barrato, Brioni’s chief executive officer for the Americas, attributing the bulk of the business to local customers. “Where we used to be tourist-driven, we’re 50-50 now.”

Barrato said the store’s new setting more effectively presents made-to-measure, the sales of which have increased by double digits, as well as sunglasses, a new category that premiered last year, and small leather goods, a focus for new creative director Brendan Mullane. Priced at $85,000 apiece, zipper blousons in colored crocodile with oversized cuffs also appeal to the highly international clientele of Brazilians and Russians.

“They really appreciate exclusives and exotic skins,” he said.

At Neiman Marcus Bal Harbour, the men’s designer area doubled in size in late 2011 and offers Brioni, Gucci, Tom Ford, Stefano Ricci and other high-end labels. The store offers a pool of dress shirts and ties from multiple brands, a contemporary area focused on denim and diffusion collections, and a tight shoe section with styles ranging from Lanvin oxfords to Gucci driving moccasins in an array of materials. The department occupies the entire third level of the store, save for a café.

“Our clients requested a broader selection in a world completely dedicated to men with new names and exclusives,” said men’s fashion director Matthew Singer, pointing to the blend of foreign tourists and locals who own second and third homes in Miami. “We’ve really become the go-to destination for fashionable male shoppers with brands like Alexander McQueen, Balenciaga and Pierre Balmain.”

After years of tucking its men’s wear in a back annex, Dolce & Gabbana recently built a second door with a straight shot from the mall’s garden courtyard. The December expansion increased the size of the store to 5,000 square feet. Clearly defined by its thick frame of glossy striped wood, the masculine lair features two Murano glass chandeliers in the deepest shade of violet, black glass walls and volcanic stone floors. Garnet damask panels and tufted stools demarcate the watch department.

Other high-end brands are shining a spotlight on men’s as well. Prior to relocating to a new black marble prototype store designed by creative director Hedi Slimane in December, Saint Laurent had only offered men’s accessories. But with this summer’s expansion to 3,400 square feet, Slimane’s full men’s collection, including the initial foray into fine jewelry retailing for $995 to $3,000, and court-sneaker classics from $495 to $575, will hit the floor.

Malls across Miami also report a thriving men’s business. Both Bloomingdale’s units in the area have been busy adding designer shops. The men’s department at the Aventura Mall was renovated to introduce nearly a dozen brands such as Gucci, John Varvatos, Robert Graham, Polo Black Label and Burberry over the past six months. At the Simon-owned Falls shopping center in South Miami, Etiqueta Negra, a popular men’s collection in Argentina, launched one of three U.S. boys’ shops-in-shop within the Bloomingdale’s there. Props such as handmade riding boots and a rare vintage auto tell the story of the brand, whose polo connection also comes through in its casual shirts and sporty jerseys worn by the company’s team Ellerstina.

Brooks Brothers has signed a 10-year lease and will relocate its store in the Falls to a better location this summer. The company is also scouting emerging neighborhoods such as Brickell and the Miami Design District for more doors and is considering the possibility of opening the city’s first Black Fleece concept.

“Though we saw opportunity in the market, we were slightly concerned about cannibalization,” said Kavanagh, who recently oversaw the renovation of the nearby Boss boutique at Village of Merrick Park. “But the Dadeland store immediately surpassed our expectations, so we jumped at the chance to be in a more prominent location and add Hugo.”

And men will really seize the moment when Hermès unveils the brand’s inaugural Men’s Universe fashion show in the Miami Design District in late May.