After 22 years leading the brand through unprecedented expansion, new formats and upscale product offerings, Gould is stepping down as chairman and ceo. 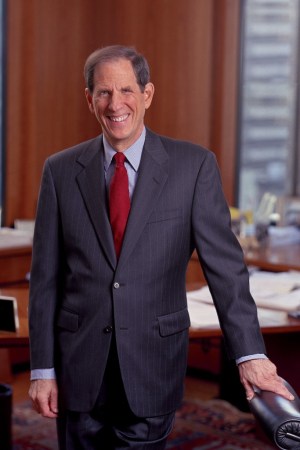 Michael Gould, after 22 years leading Bloomingdale’s and elevating the brand through unprecedented expansion, new formats and both contemporary and upscale product offerings, is stepping down as chairman and chief executive officer and handing the baton to Tony Spring, his handpicked successor.

Spring, president and chief operating officer, will become Bloomingdale’s chairman and ceo on Feb. 1. Spring has spent his entire career at Bloomingdale’s.

Gould, who turns 71 next month, has been among the most popular and respected leaders in the industry due to his track record at Bloomingdale’s; making his mark running J.W. Robinson’s and Giorgio earlier in his career; forming strong partnerships with vendors; his philanthropic activities, and his unusual leadership style, nurturing and paternal while also tough and aggressive.

“I have been thinking about this for a long time,” a clearly emotional Gould told WWD, adding that his conversations with Terry J. Lundgren, chairman, ceo and president of Macy’s Inc., parent of Bloomingdale’s, about leaving Bloomingdale’s go back as far as last winter. Gould said he’s examining what the next phase for him is: “There are a lot of things I would like to do. I love to teach. I would like to give more of myself in the nonprofit world. Retirement is not in my vocabulary.”

“Tony is a bright, humble leader,” Lundgren added. “He clearly has the strengths and experience to lead Bloomingdale’s and has had more experience than most executives in our company. This is a pretty clear and straightforward transition.”

“Mike has not just been a boss. He’s been a mentor and a friend,” Spring said. “I can’t fill other people’s shoes. I can only take what I learned and admired and help other people in this organization grow.”

Spring’s career at Bloomingdale’s, spanning merchandising, marketing, stores and operations, has been like a grand tour. He was the first person Gould promoted at Bloomingdale’s, in 1991, not long after Gould stepped in as ceo. Some people, including the late Marvin Traub, who preceded Gould as chairman and ceo, thought Spring was too young then to rise from a housewares buyer to divisional merchandise manager in home, but Gould felt strongly about Spring, saw his intellectual curiosity, drive, and feel for the Bloomingdale’s DNA.

Spring, 48, began his Bloomingdale’s career in 1987 as an executive trainee in the White Plains, N.Y., store. Over the next eight years, he assumed positions of increasing responsibility in home furnishings, rising to senior vice president. In 1997, he was named senior vice president for marketing. A year later, he was promoted to executive vice president, and in 2003 added bloomingdales.com, Bloomingdale’s by Mail and restaurants to his responsibilities. In 2004, Spring was named senior executive vice president, and in 2008 was promoted to his current job. “We are an organization that provides people opportunities for growth. I feel like I am the poster child for that,” Spring told WWD.

A big part of Spring’s agenda in the last few years has been to elevate the customer experience, help associates build relationships with customers and omnichannel initiatives.

In an interview, Spring outlined several objectives for the near future, including leveraging the inventory so it’s more shared across selling channels; enhancing and distinguishing the online offering to sustain its high rate of revenue growth; extending the order online, pick-up-in-store option, which is at just six locations, and rolling out additional handheld devices to associates for quick access to product and customer information and better service. So far, only 125 associates in six stores have been issued the handhelds.

“Bloomingdale’s as a brand is uniquely positioned to grow in every channel of business,” with opportunities to grow omni operations and online sales, and open more full-price stores and outlets. He suggested there’s also the possibility of opening more international stores, of which there is currently only one. “We are extremely successful in Dubai. Bloomingdale’s is a great international brand.” The 37-unit Bloomingdale’s, he also noted, will open a store in Glendale, Calif., next month, followed by openings in Stanford, Calif., and Hawaii next year. Bloomingdale’s also has 13 outlets.

“Tony has been very focused on omnichannel, mobile technology, and how customers shop,” Lundgren said, adding that Bloomingdale’s is “on the move in regards to omnichannel and adoption of new technologies.”

Spring has a reserved, studious manner, particularly compared with the lanky, wired and assertive Gould. “What I try to do is to be a great listener, learn from the people around me and provide a level of direction,” Spring said, about his management style. “I ask a lot of questions. I try to keep it focused.”

Gould joined Bloomingdale’s as chairman and ceo in 1991. Before Bloomingdale’s, he was president and ceo of Giorgio Beverly Hills. Gould began his career at Abraham & Straus in 1968 as an executive trainee and rose to become a merchandise vice president. In 1978, he joined J.W. Robinson’s in Los Angeles where he rose to chairman and ceo.

Gould is among the longest-standing ceo’s of a retail organization, at least in recent times. He steered the company through its California expansion, launched omnichannel strategies, opened Bloomingdale’s first and only international store, which is in Dubai, led the development of the first Bloomingdale’s outlets and conceived the SoHo small-store format, which is being cautiously brought to new locations; fostered a tight management team with little turnover; added a host of luxury brands and luxury leased departments, and maintained the store’s leading position in the contemporary and cosmetics markets.

Lundgren said Gould is leaving the $3 billion Bloomingdale’s as “a much more financially successful business today.

“We have a branch-store strategy today that is consistent with the image and brand experience at 59th Street,” Lundgren said. Years ago, the theater of Bloomingdale’s had been more confined to the 59th Street flagship.

On Wednesday morning, the news about Gould’s departure was announced internally at a movie theater across the street from the Bloomingdale’s flagship. Earlier that day, an e-mail had gone out to hundreds of employees instructing them to go to the theater. About 600 showed up, testifying to the popularity of Gould as well as Spring. Ironically, the news of the changing of the guard at Bloomingdale’s came out the same week that two other top New York retailers, Stephen I. Sadove, chairman and ceo of Saks Inc., and Ron Frasch, Saks president, are vacating their jobs.

“Mike received a tremendous ovation,” Lundgren said. “When I said one of the great things Mike did has been to develop Tony Spring, there was also a spontaneous ovation for Tony. It was emotional. How could it not be?”

Spring told the crowd he felt “humbled, privileged and proud.” He also said it felt like the day in 1991 when he proposed to his wife. Some of those goose bumps returned.

In an interview at his office, Gould gestured to a folder on his desk containing a succession plan that he formulated 10 years ago with an outside consultant. In it, he isolated Spring as the lead candidate to succeed him. “The two most important things you can do as a ceo is to create a strategic plan that works, and create a succession plan.’’ Then he cited a Chinese proverb. “Parents are put on earth to give their children wings to fly on their own, and also come home.”

“I’m a teacher,” Gould added. “That’s what I am all about. I want people to grow,” Gould said.

Discussing how he feels about leaving Bloomingdale’s, Gould, an inveterate article sender on business and self-help topics, cited an article by John Gardner. It was about personal renewal. “Life is an endless process,” Gould said. “We are all on a journey.”

For Gould, leaving Bloomingdale’s is not about saying farewell. It’s just another step forward in life and a chance for a new phase. “Friends don’t say goodbye. Friends say, ‘I will see you.’”