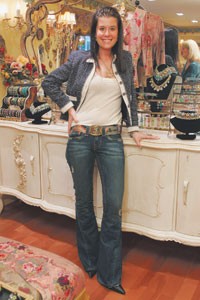 Negrin’s designs elicit strong passions in some people. Julie Jurist, a 25-year-old former Bloomingdale’s executive, was completely smitten when she saw Negrin’s cameos surrounded by glittering stones at the department store. It wasn’t until she visited Negrin’s 300-square-foot leased department at ABC that she realized the possibilities: yards of roses and cabbage flowers, angel and cherub figurines, florid crown moldings, chandeliers embellished with crystals and ceramic tiles painted with pale blooms.

Jurist, who furnished her apartment with the designer’s uberfeminine trappings, last month opened a 600-square-foot store at 971 Madison Avenue near 76th Street. She expects it do in excess of $2 million in sales in the first year.

Decorated with a dizzying array of roses and lace, the store looks like the inside of a decoupage box, the Victorian-era craft where pattern is layered upon pattern. “I felt her concept needed to come to Madison Avenue,” Jurist said. “I fell into Michal’s world. I feel I can express myself through her.”

Jurist, who was managing the second floor of Bloomingdale’s 59th Street flagship when she discovered Negrin, was happy to change career paths. “Federated asked me if I wanted to go into the buying program,” she said. “I knew it was crunching numbers. I’m happier on the floor with the customers.”

She flew to Israel to meet Negrin and prove that she was serious about operating a store. “I had to convince and sell her,” said Jurist, who funded the venture with a partner. Apart from 17 company-owned units in Israel, most of Negrin’s 37 stores worldwide are owned and operated by local entrepreneurs. There are nine stores in Japan, two in Paris and one each in Las Vegas; Miami; San Jose, Calif.; Madrid; Sydney; Rome; Prague; Singapore, and Windsor, England. Negrin plans to open stores in London and Amsterdam.

Her company has a rigorous screening process and detailed contract for potential store owners. “The stores look the way I want them to look,” Negrin said. “If someone is attached to my world the way I am, it becomes apparent. We meet hundreds of people who want to open our stores. Those who pass really believe in the products.”

Jurist passed with flying colors. Negrin asked her to open six locations in New York and the surrounding tristate area this year. “I’m very actively looking in SoHo,” Jurist said. “I almost have a lease out.” Other locations Jurist is considering include the Mall at Short Hills in Short Hills, N.J., the Americana Manhasset in Manhasset, N.Y., the Roosevelt Field Mall in Garden City, N.Y., and the Upper West Side.

Negrin, 49, employs 250 workers at her Bat Yam factory outside Tel Aviv. The great-granddaughter of David Ben-Gurion, one of the founders of the state of Israel, she was raised on a kibbutz where her life was fairly sheltered. “My family didn’t have a TV,” she said. “Everything that I saw from the outside, from the city, made an impression upon me.”

When she was a child, Negrin visited a flea market in Jaffa with her mother and bought some postcards with romantic Victorian images. She became obsessed with the style. “From a young age I started to design things I dreamed of,” she said. “When I grew up, designing brought the world closer to me. I’m open to things that are of interest to me. In my former life I must have lived in England.”

Negrin has a long list of projects that keep her busy. She’s working on an extensive clothing line as well as shoes and accessories. There’s also a fragrance in development and a line of chocolates. Her collection includes some 1,500 items. Jewelry can be ordered in 200 different color combinations. Prices range from $48 for earrings to $4,800 for an elaborate headpiece. Cameo necklaces are $580; pins, $188, and a pair of leather boots painted top to bottom with roses, $680. Jurist said an average sale in the store is between $300 and $500.

While Negrin has furnished apartments and homes, she’d like an even larger canvas. “My biggest dream is to do a boutique hotel in my signature style,” she said. “Each room would be a little different.”