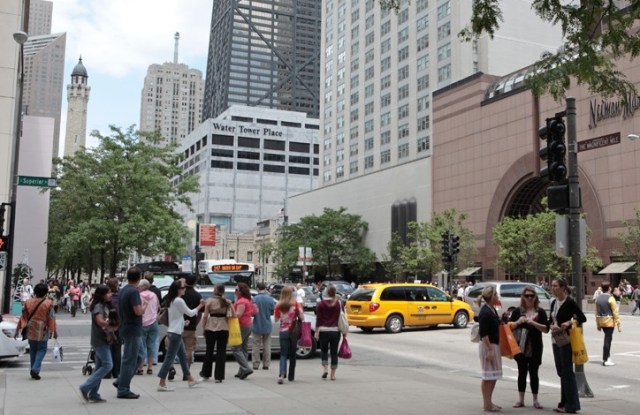 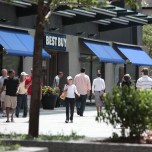 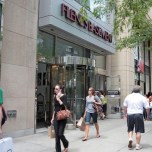 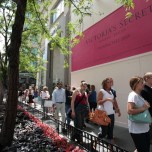 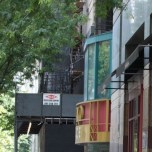 CHICAGO — Luxury labels have some new company on the Magnificent Mile here, with recent entrants such as Best Buy, Zara and Forever 21 adding a dose of the mall.

Michigan Avenue, which is believed to generate the most foot traffic of any shopping street between New York and Las Vegas, has a reputation as the Midwest’s leading high-end address, home to Chanel, Gucci and Cartier, among others. Those brands still stand tall on the avenue, but they now count among their neighbors chains found at many regional shopping centers.

Although many national and international brands still seek space on the Magnificent Mile — Michael Kors Collection is opening this month — some high-end design houses such as Prada, Yves Saint Laurent and Jimmy Choo have opted for smaller spaces along Oak Street, a more exclusive side street off Michigan Avenue that has lower rents.

“We’re definitely seeing a shift,” added Kaplan, who recently surveyed vacancy rates on Michigan Avenue, which have risen to 7.2 percent this year from 6.3 percent last year. “It’s been subtle but important.”

As part of the thoroughfare’s evolution, Tiffany & Co. now sits next to a new 18,000-square-foot Victoria’s Secret and its pink facade, which opened this week. Saks Fifth Avenue will be joined at the Chicago Place mall by the nation’s largest Zara, a three-level, roughly 35,000-square-foot space set to open Oct. 30. Doors away, fast-fashion retailer H&M sits around the corner from Ralph Lauren.

The changes under way on the Magnificent Mile mirror trends affecting the entire industry that have been triggered by the recession, such as the popularity of mixing high-end items with those in the moderate and mass categories. First Lady Michelle Obama, a Chicagoan, has helped to push in this direction, wearing designer clothes as well as J. Crew.

“The street has a cachet that will remain,” said Kaplan, adding that although the per-capita spending on Michigan Avenue has decreased, a subsequent increase in traffic and overall spending has more than made up the difference. He wasn’t able to provide statistics.

In addition, the Magnificent Mile has been able to broaden its appeal to tourists, as well as shoppers of varying ages and income levels, said Kaplan and other real estate brokers.

“Michigan Avenue is going to become more eclectic,” he said, noting that luxury shoppers now have more options. “They can still shop at Armani and shop at Ralph Lauren and buy a GPS at Garmin for their yacht or airplane.”

Amid the changes, a notable fashion component remains, said Lorraine Adney, broker and vice president of McDevitt and Co., referencing the infusion of retailers such as Forever 21, H&M and Zara. “It’s just younger, faster and less expensive.”

Men, in particular, have wider choices, said Keven Wilder, a Chicago retail consultant, pointing to Magnificent Mile fixtures such as the Apple Store, Niketown and Best Buy, where Kaplan recently noticed six-deep lines at all the cash registers on a Tuesday afternoon.

In turn, the street’s shoppers have become more diverse.

“It’s become more international,” said Kaplan, who added that those who stroll down Michigan Avenue often hear a multitude of languages. Tourists are “attracted to all of the stores,” whether luxe or moderate, he said, citing the Original Levi’s store at 600 North Michigan as an example. “We take Levi’s for granted, yet it’s full of Europeans.”

The change also has allowed Michigan Avenue to keep moving forward in this economy, as the lust for luxury has softened.

Adney said that although the Magnificent Mile retains its appeal, the real estate market there can be problematic because of the predominance of extra large retail space, along with high costs.

Rents along Michigan Avenue have not been as severely discounted as in other cities because the prices were not overly inflated, said Adney.

In its heyday, as recent as the first part of 2008, rents hit $500 a square foot, and have since leveled to $400 a square foot, Adney said. “We didn’t have the exponential rent increases that New York or Los Angeles did,” she said, noting that 10 years ago space on the boulevard sold for $300 a square foot.

In recent years, some luxury retailers have opted to open their Chicago stores on Oak Street. With its collection of converted town homes, Oak Street offers a more boutique-y feel, lower rents — landlords are asking $300 a square foot for prime street level space — and the availability of smaller retail spaces, a rarity along Michigan Avenue.

“There is a certain percentage that doesn’t want to bump shoulders with tourists and hoi polloi,” Kaplan said. “Those people will feel comfortable on Oak Street.”

In recent months, Oak Street’s upscale atmosphere has extended farther west with Barneys New York opening a 90,000-square-foot space at Oak and Rush streets. The majority of its former space across the street is still vacant, although Hermès plans to take over part of it. In addition, local brokers see the potential for luxury retailers to spill onto Rush Street, where the new Marc Jacobs Collection store is set to open early next year, joining local specialty stores Ikram and Jake. Rents on Rush Street are similar to those on Oak at less than $300 a square foot, Adney said.

A revived State Street, which is west of Michigan Avenue, with the bulk of its shopping corridor closer to the Loop downtown and Chicago’s theater district, also provides a viable, cheaper alternative to Michigan Avenue. On State, the highest rents are about $150 per square foot, Adney said.