Milaura Gets Bigger — and Brighter — in Milan

In a city populated by flagships and luxury boutiques focused on offering exclusively well-established labels, Milaura’s founder Laura Poretti wants to stand out from the crowd with a more personal, niche selection of brands and products reflecting a very peculiar style.

“When I decided to open Milaura in 2015 I was guided by the desire to offer something special, something [that] could reflect my very own approach to fashion, which is quite different from that of other retailers in the city,” said Poretti, who covered the role of buying director at Italian department store La Rinascente, prior to landing at Agnona as general merchandiser manager and fashion coordinator and then serving as fashion consultant for several brands in the industry. “Milaura is rooted in a very precise merchandising strategy aiming to offer a brand mix filtered through my lens.”

Quickly becoming a point of reference for those Milanese women who, in keeping with the city’s traditional aesthetic, lean definitely bourgeois yet are veined by a sense of smart practicality and prefer a discreet, effortless chic elegance, the original store became too small to fully portray Poretti’s vision.

“A year ago, I started looking for a new, bigger space. I was visiting many locations, I kicked off a few negotiations, but suddenly talking to a friend I found out that a store, previously housing an interior design brand and facing my shop, was going to be available soon,” Poretti explained. “I though it was a sign from heaven. I didn’t think too much and I signed. To be honest, I was probably beyond brave but now that the store is finished I couldn’t be happier.”

Following a summer entirely spent at overseeing the construction site — of her own admission, she likes to be in control — Poretti opened the doors of the store the first week of September.

Featuring a concept centered on brand identity and customization, Milaura welcomes guests in an airy space, where the dominant white is matched with touches of neon orange and mustard yellow. The brand’s signature logo, a doll sketched by Poretti, which symbolizes the lighthearted, unconventional spirit of the project, not only stands out in the glass domes framing the shopping windows on the façade, but is also the protagonist of a multicolor wallpaper covering the cash desk. In addition, Poretti teamed with a sculptor to create the heads, reproducing the face of the Milaura doll, for the mannequins in the windows. 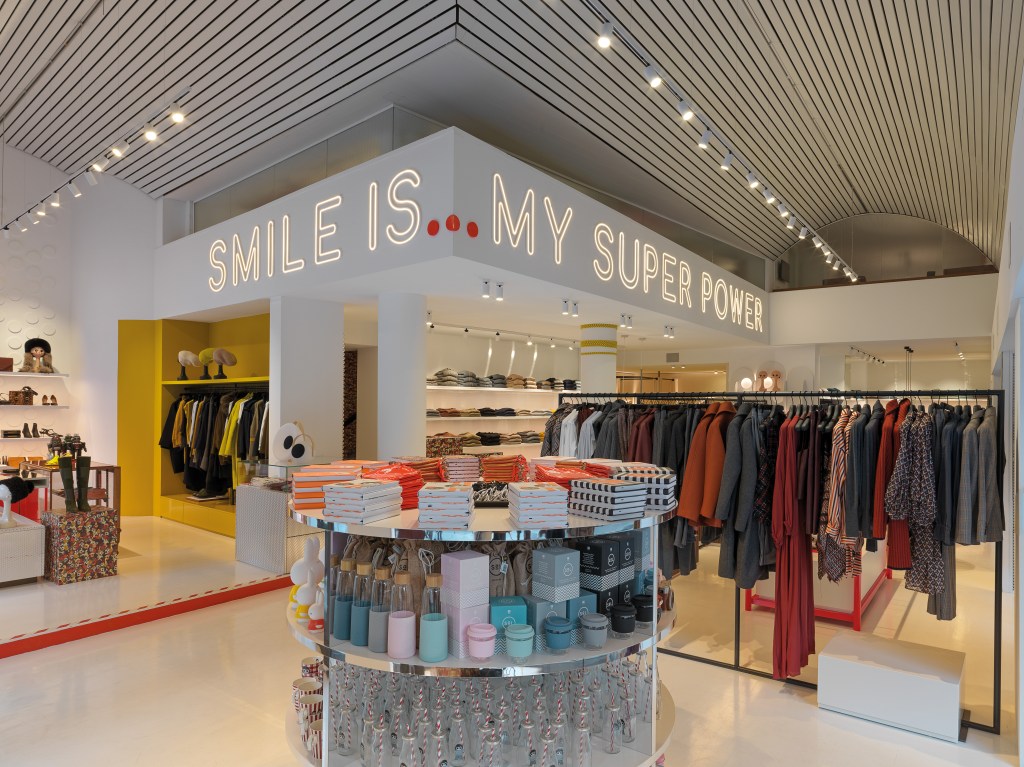 “My line never overlaps with the brands we carry, it complements them,” Poretti said. “With Milaura I propose high-end essentials, such as striped shirts, cashmere sweaters, leather jackets, pants and skirts, as well as outerwear with fur touches, all featuring clean lines. These are versatile pieces [that] are easy to integrate into the wardrobe and mix and match with more fashion-oriented styles.”

Along with housing the company’s offices on the second level, the store on the basement features a secret room, accessible through a hidden staircase located close to the dressing room area, where VIP clients can enjoy a shopping session in total privacy.

“Here we will also host special events. I really imagined this space as something flexible, which can constantly evolve and get new forms,” Poretti said. “My ultimate dream is to bring this concept, very Milanese, around the world. Maybe to Tokyo or New York. I’m aware it’s a super ambitious plan, but with all the ups and downs of life, I understood that we have to exit our comfort zone and follow our dreams.”