Army and Air Force Exchange Service, a $10 billion retail giant that operates in 49 states and more than 30 countries, is on the prowl for market share. 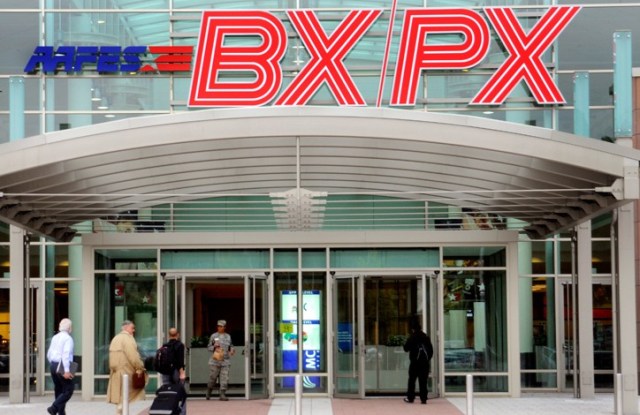 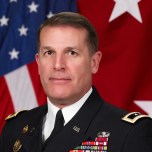 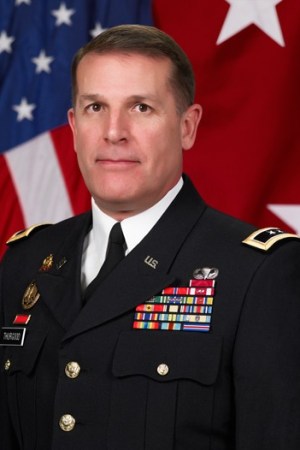 A $10 billion retail giant that operates in 49 states and more than 30 countries is on the prowl for market share.

The Army and Air Force Exchange Service, which sells 877,000 items from socks to electronics to 11.6 million active and retired military personnel, plus their spouses and dependents, is stepping up fashion, modernizing systems and investing to improve service. It’s also building malls and lifestyle centers at major bases in the U.S. and abroad.

The exchange service sees the potential to grow despite the impact of the recession.

“It’s the largest $10 billion business that nobody knows about,” said Maj. Gen. Keith Thurgood, commanding general and chief executive officer. “I was asked how gloomy 2009 would be, and I said one word — ‘opportunity.’ This is the time for us to invest in technology, spend money and focus on the customer in terms of pricing and promotion. If we get our strategy right, we can put ourselves on a glide path to grow in ’10, ’12 and the future.”

The Army and Air Force Exchange Service is the biggest player among the military’s retail enterprises, generating 69 percent of total revenue. The other four exchanges serve the Navy, Marines, Coast Guard and veterans.

Thurgood, an Army reservist for 26 years, returned to active duty in August 2007 after a yearlong tour in Iraq, where he directed the distribution of equipment and supplies for U.S. and coalition forces. Thurgood spent most of his corporate career at PepsiCo and has been on leave as director of strategy and integration since 2006.

With more than 3,000 locations and $10.2 billion in fiscal 2008 sales, the Army and Air Force Exchange Service sells familiar products, foods and services at a discount to servicemen and women around the world. Stores range from convenience size to 320,000-square-foot marketplaces.

The exchange service is like other big retailers in that it has brick-and-mortar, Internet and catalogue channels and faces the same challenge of making a profit by delivering the right products to its customers. But in many ways it is unique.

Two-thirds of all earnings — $376.3 million in 2008 — are used to help build and maintain morale, well-being and recreation programs, such as pools, golf courses and youth services. The rest is used to recapitalize the business.

For soldiers at war in Iraq and Afghanistan, the exchange is the place to get the latest DVD releases, Monster Energy drinks and Snickers bars. For their wives and fellow servicemen and women back home, the big attraction is price: Merchandise ranging from Estée Lauder lipsticks to Sony TVs are discounted an average of 20 percent, and everything is tax free except alcohol, tobacco and gas.

AAFES can turn a profit despite discounting by offering a broad, continually changing assortment with limited depth, Burgess said. “Our typical customer may visit our stores multiple times per week. AAFES provides the first price as the best price in lieu of a high-low promotional strategy on branded apparel.”

The blend of mass with class is on display at its 174 largest stores, including the two at Fort Hood, a 340-square-mile military base in central Texas. The main store, which is 179,000 square feet, resembles a Wal-Mart Supercenter with brightly lit aisles of moderate-price goods. But there are touches of department store brands such as Liz Claiborne, Nautica and Tag Heuer, as well as some Macy’s private labels.

Discounts on all goods, including the latest fashion deliveries and prestige cosmetics, plus free shipping incentives for its catalogues and Web site, appear to give the retailer an edge. But Thurgood emphasized that competition is stiff because 70 percent of military personnel and all retirees live off base.

“One of the things that constrains AAFES in top-line growth is our customer base, which is only 11.6 million,” Thurgood said. “So we have to be really good at marketing to win our customers back [on base] because if we don’t they’ll go shop somewhere else.”

Adding hipper labels to women’s, men’s and cosmetics are central to the mission. The exchange service did $822.6 million in 2008 softlines sales and $200 million in cosmetics and fragrances with Lauder, Clinique, Lancôme, Elizabeth Arden and Shiseido as well as Revlon, Cover Girl and other mass brands.

“We think we have unrealized potential with the 18- to 28-year-olds who are looking for something a little newer and fresher,” said Jacquie Estrada, senior cosmetics buyer, citing “a new concept shop” for brands such as Nars, Philosophy, Benefit, Smashbox, Carol’s Daughter, Susan Posnick and Fusion.

“Our customer has asked for a little more updated program,” said Alicia Scott, vice president of soft lines. “They want to look a little younger.”

Young men’s sportswear, which was trending 19 percent ahead last year, got a style injection from Ed Hardy, Affliction/Extreme Couture, 191 Unlimited, Junk Food Clothing and One More Round.

Coach shop-in-shops, built by the company are a growing initiative. About 35 styles are also sold on the exchange service Web site, and 2009 sales were projected to exceed $37 million — making Coach one of its top brands worldwide.

The exchange service broke ground in July for the first lifestyle center within a military base at Fort Bliss in El Paso, Tex. Dubbed Freedom Crossing and planned like a town center, the $97 million development will be anchored by a 242,000-square-foot post exchange and also have specialty stores, restaurants, recreational facilities and the first state-of-the-art 10-screen theater on an Army base.

Tenants at the 479,051-square-foot project are set to include Rack Room Shoes, Hibbett Sports and the Hard Rock Café. The center grew out of the Army and Air Force’s 2005 plan to reposition troops worldwide, Thurgood said.

“We have to fundamentally reconceptualize how stores look, how they are shopped and the environment we want our soldiers and families to shop in,” he said. “This will give them a sense of place and belonging and provide them world-class facilities because they deserve it.”

Freedom Crossing is expected to open in August, and the exchange service hopes to sign retail tenants such as Victoria’s Secret and Forever 21.

Lifestyle centers are being considered for Fort Lewis in Pierce County, Wash.; Fort Sam Houston in San Antonio, and Eglin Air Force Base in the Florida panhandle.

A $104 million mall with similar amenities, plus a 350-room hotel and recreation center opened Sept. 21 in Germany at Ramstein Air Base. Like Freedom Crossing, the Kaiserslautern Military Community Center is one of the largest projects undertaken by the exchange service. Its 437,000-square-foot shopping center has a mix of stores and restaurants from a quintessentially American Johnny Rockets diner to a German bakery. It is expected to draw American military from across Europe. Indeed, demand has already risen for chartered buses from Italy and the U.K., an AAFES spokesman said.

A smaller $80 million mall also will open this fall at Kadena Air Base in Okinawa, Japan.

As far-flung as his empire is, Thurgood believes in thinking big and acting small.

“All retail is local,” he said. “You have to touch the customers one at a time. At the end of the day it is really about small actions and executions at the store level, and every associate owning those customers.”