NEW YORK — More than 200 customers packed the lingerie department of Bloomingdale’s flagship here at a cocktail party and fashion show for the new Nicole Miller Collection of luxe intimates. 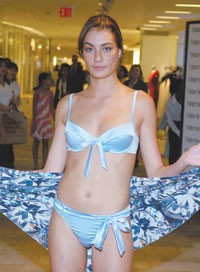 NEW YORK — More than 200 customers packed the lingerie department of Bloomingdale’s flagship here at a cocktail party and fashion show for the new Nicole Miller Collection of luxe intimates.

Shoppers enjoyed “Millertinis” — a mix of gin, wine and seltzer — as models presented Miller’s first collection of bras, corsets and allover seamless daywear tops and panties last Wednesday night. The collection, which is produced under license by Delta Galil USA, was first unveiled to retailers last month during a cocktail party and fashion show at the Scores West strip club here.

The event at Bloomingdale’s was a bit tamer than the evening at Scores.

“I had to whip up some scarves from my Studio Collection as cover-ups for the thongs the day before this event,” Miller said. “Bloomingdale’s didn’t want the thongs to be shown.”

Bud Konheim, chief executive officer of Nicole Miller, said the top-selling item at the Bloomingdale’s event was a rose-color ruched bra with lace and ribbon detailing. It retails for a suggested $50. Neither he nor Bloomingdale’s executives would say how many units were sold, but Konheim did say “Bloomingdale’s is pleased with its 8 percent sell-through for the week.”

He added there were three other bestselling items: a matching thong, which retails for $40, and a vintage-striped underwire bra and an ivory satin bustier with pink bow detailing, each retailing for $85.

Konheim said the Miller company plans to stage additional events, including a “special Valentine’s Day party and fashion show for women.” Delta Galil also has the license to produce men’s underwear for Miller.

Details haven’t been completed, but Konheim noted, “It’s going to be lots of fun, and there will be lots of men to entertain the women.”