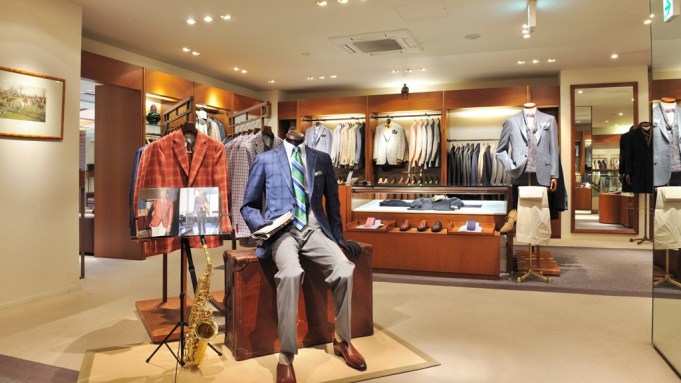 Executives at Mitsui, which bought the New York-based company last year, said they are in early contact with potential retail partners about opening Paul Stuart stores in both the U.S. and Asia. Currently the brand has just three stores in the U.S. — its original Madison Avenue boutique and two Chicago locations — as well as two freestanding units in Tokyo and about 100 shops-in-shop in Japan. At one point, the brand also had a presence in South Korea but it has since exited the market.

Daisuke Yashima, general manager of Mitsui’s Fashion Business Division, said the company is in contact with several fashion and retail players in Greater China about retail expansion and licensing deals for Paul Stuart. He said the company’s first priority is to open flagships in Hong Kong, Taiwan and, possibly Seoul, although he declined to give a time frame for how soon those stores could materialize as talks are still in the early stages.

“We are proceeding with this Asia strategy step by step,” Yashima said, stressing the importance of finding partners with a deep knowledge of the local market. “Although geographically [Japan and China] are near, the concept or the philosophy of the fashion business is a little bit different between Japanese and Chinese people.”

Similarly, Mitsui is evaluating Paul Stuart’s expansion opportunities in the U.S. Tak Shirai, general manager of Mitsui’s Brand Apparel Department, said the company has received a “number of offers” regarding potential store locations in cities like Washington and Miami but it’s too soon to say where Paul Stuart will open next in its home country.

“We’re pretty much open to new ideas and proposals,” Shirai said. “We’re not saying that we’re going to stay with three stores for a decade.”

While the Mitsui executives said they are eyeing other markets like Europe in the longer term, they plan to focus on the U.S. and Asian markets in the immediate future as they get better acquainted with the company they purchased last December.

“Ultimately our goal is to open shops in European cities like London or Paris, maybe Milan,” Yashima said.

Mitsui, a massive conglomerate that counts fashion as just one of its numerous businesses spanning the worlds of steel production to coffee bean exporting, has a long history with the Paul Stuart brand. In 1975, Mitsui began to import the retailer’s private label merchandise into the Japanese market. In 1991, the relationship was expanded to a licensing deal. Since that time, Mitsui has sublicensed the brand to Sanyo Shokai Ltd. and 13 other companies, which offer a wide range of product under the Paul Stuart name.

Yashima said the acquisition deal was the fruit of some three years of negotiation between the Japanese company and the retailer, which had limited human and financial resources to further develop its business. The two parties discussed various possibilities regarding international expansion, including having Mitsui sign on as a global licensee, but ultimately they agreed on an outright sale, he said.

“We at Mitsui think the Paul Stuart New York store is an incredible asset. It’s always been very important for us in Japan as we were managing the Paul Stuart operations here, and while opening our boutiques in places like Omotesando and Ginza, we always wanted to achieve the same level [of quality and service]. And that will continue to be the case,” Yashima said.

He went on to stress the importance of retaining Michael Ostrove, Paul Stuart’s president and chief executive officer before the acquisition and a member of the store’s founding family. Under the title of president and ceo of Paul Stuart Inc., Ostrove continues to oversee the U.S. business and exercises quality control approval for merchandise for international markets.

“The most important thing about the Paul Stuart New York store is the customers who love it, who always have their suits made there and buy accessories there. And they have a relationship with the people who work in the shop….That is something we can’t change,” Yashima said. “We recognize Mr. Ostrove and his staff are the biggest asset of Paul Stuart New York, so we hope to retain them as much as possible, as long as possible.”

The Mitsui executives acknowledged an incentive for the Japanese group to build up its fashion portfolio with a wholly owned brand. Mitsui used to be one of the fashion industry’s major players, acting as Japanese partner to brands like Versace and Valentino. Over time, those types of licensing and distribution deals went out of vogue as brands opted to take direct control of their Japanese businesses. Today Mitsui’s fashion assets include distribution deals for Burberry and Max Mara, as well as licensing deals for Pierre Cardin and Burberry’s Japanese diffusion lines Black Label and Blue Label.

Mitsui is declining to give sales targets for Paul Stuart beyond the ones released earlier this year when the deal was unveiled. For the year ended March 31, annual retail sales of Paul Stuart in Japan totaled 11.5 billion yen, or $133 million at current exchange. Mitsui is aiming to grow the brand’s retail business in Japan to 20 billion yen, or $231 million, by 2015.

Shirai said that Mitsui has enjoyed “strong growth each year” with the Paul Stuart business in Japan. He allowed that growth in the U.S. has been more modest and Mitsui is currently studying the brand’s performance in the American market.

In terms of further developing the Japanese business, Yashima said Mitsui is focusing on expanding the range of Paul Stuart products in Japan rather than opening more retail locations. He said the company wants to strengthen its offerings in women’s apparel. This spring, Mitsui and Sanyo Shokai rolled out a weekend-appropriate range of casualwear called Paul Stuart Sport through some 40 points of sale in Japan. Similarly, Mitsui plans to launch Paul Stuart’s younger Phineas Cole line in Japan, possibly as soon as this fall.

While the Mitsui executives declined to give an age range for Paul Stuart’s key clientele in Japan, Yashima characterized them as “very conservative” with a preference for dark suits in hues like gray and navy.

Shirai attributed Paul Stuart’s success in Japan to a very loyal, repeat customer base. “The type of customer who buys Paul Stuart is not a person who is always looking at price comparison and going to the cheapest,” he said.