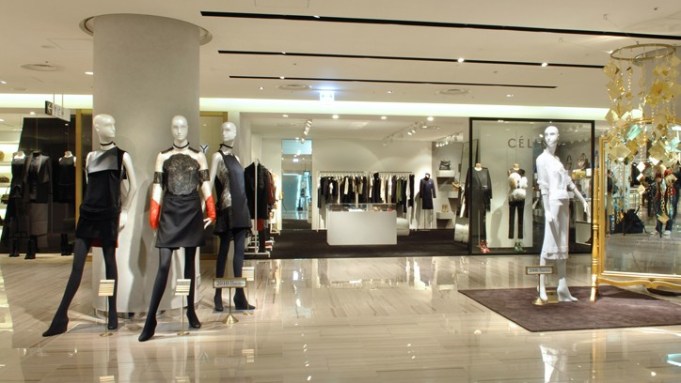 TOKYO — Mitsukoshi, one of the grande dames of Japanese retail, just got a facelift and it’s hoping to charm consumers back into spending mode.

The Ginza flagship, which the retailer has been renovating gradually over the past several years, reopens to the public Saturday.  It had been closed for 10 days to put the finishing touches on its overhaul.

Although Mitsukoshi isn’t releasing investment figures, it’s safe to say that it’s one of the neighborhood’s biggest retail developments in years. The reopening also comes at a delicate time for the nation’s department stores, which are grappling with more than a decade of declining sales. Tight-fisted consumers are attempting to save money as fears about the economy loom large and the retail landscape is more competitive than ever, populated with online discounters, specialty stores and fast-fashion chains.

Originally opened in 1930, the Mitsukoshi store now comprises 12 stories and an additional three underground levels. It offers a wide range of designer apparel and accessories, jewelry and cosmetics; it also features a rooftop terrace and a bevy of gourmet food counters and eateries including a Harrods tea parlor. The refurbished store boasts a selling space of almost 388,000 square feet, which is 55 percent larger than its previous incarnation.

“Until now the department stores in Japan have been quite limited in their selection of products. So the new Ginza store will be offering a wider variety of things going from the high end to more moderately-priced things,” Tatsuhiko Adachi, the store’s manager, said in an interview, adding that the store is gunning for a first-year sales target of 36 billion yen, or $429.33 million at current exchange.

Adachi said the store has about 50 percent more women’s apparel brands than it did before and about three times as many handbag brands.

The executive said Mitsukoshi wants to encourage consumers to comparison shop as much as possible. To that end, it limited the number of wall-in shop-in-shops to a handful and opted for a more open layout of brand-specific corners or multi-brand concepts.

“Even if a customer is buying one of the more moderately-priced brands, he or she will still see the luxury products and they’ll remember it. And then maybe next time, they might buy something more expensive,” he said.

The handbag department on the first floor showcases a smattering of different price points, stocking brands like Furla and Kate Spade beside luxury standards like Yves Saint Laurent and Chloe.  A men’s accessories area including the likes of Bottega Veneta, Valextra, Tod’s and Salvatore Ferragamo is located on the sixth floor.

The retailer, a part of Isetan Mitsukoshi Holdings, is not releasing investment figures for the store renovation. But back in 2008, the company said it was allocating 160 billion yen, or $1.67 billion at that time, to store renovations between 2009 and 2011. Most of that sum was destined for the company’s flagships in Tokyo, it specified.

Last month Isetan Mitsukoshi Holdings said it posted a first-quarter net loss of 795 million yen, or $8.63 million at average exchange, for the three-month period ended June 30. That is down from a net profit of 3.86 billion yen, or $39.62 million, for the same period last year.

Mitsukoshi is just one of many department store retailers that is trying to find a new formula to lure shoppers back.

Kelvin Chan, a research manager, Euromonitor International, said Japan’s department stores are still in the process of streamlining their businesses after recent consolidation in the industry. Isetan and Mitsukoshi merged in 2008 to create Japan’s largest department store operator.

“They are refurbishing old stores, changing product mix, changing the layout of stores and streamlining operations,” he said. “[They want] to re-build or re-brand themselves to make dept stores more relevant to the consumers.”

Some department store retailers have turned to fast-fashion brands to freshen up their images. Earlier this year a large Forever 21 opened in Matsuzakaya’s Ginza flagship while Uniqlo opened in the Takashimaya in Shinjuku.

Adachi said Mitsukoshi chose not to go down that path. He said the store’s emphasis on high-quality customer service- an inherently Japanese virtue in the world of retailing- goes counter to the fast-fashion ethos.

“In the future I guess we’ll see which is more successful of a strategy,” he said.