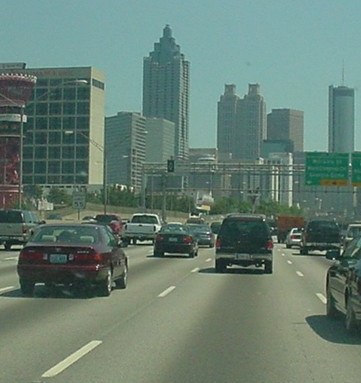 The old super-regional centers surrounded by big-box stores that once flourished in the suburbs are evolving into mixed-use town centers, especially in affluent yet underserved neighborhoods.

Experts say the new model, which originated with in-town projects and is now moving into the suburbs, is crucial not only to retail, but to Atlanta’s quality of life and its ability to attract businesses and people.

Atlanta’s 28-county metropolitan area population grew to 5.5 million in 2008 from 4.1 million 2000, according to the U.S. Census Bureau. After years of building in the suburbs, developers — often encouraged by tax incentives as well as a backlash to long commutes, traffic jams and suburban sprawl — returned to build within the city. Atlantic Station, a mixed-use mini city opened in 2005, inspired other big projects that are under way in Midtown and Buckhead. But that doesn’t mean the ’burbs are forgotten.

One example of a suburban conversion is Perimeter Mall. Opened in 1971 in the affluent Dunwoody suburb, 13 miles north of downtown, it was the first mall outside of the I-285 perimeter road that circles the city.

Today, at 1.6 million square feet, it is the largest in area and sales of General Growth Properties’ 24 Southeast centers, and in the top 20 percent of GGP’s 200 national centers, according to Carla V. Shannon, vice president of leasing and group director for GGP. She wouldn’t give sales figures.

“We’re no longer a suburban or super-regional mall,” said Dennis Kemp, general manager. “With the population explosion, we’ve transformed into an urban center, and a luxury destination.” Kemp said Perimeter sales per square foot are 50 percent higher than the national mall average.

Within a 5-mile radius are 206,000 residents and 115,000 office workers. The number of workers is expected to rise to 213,000 by 2013 as a result of all the development, according to studies by San Diego-based research firm Claritas and the Perimeter Community Improvement District.

In 1996, a nearby MARTA rail station increased rapid transit access to Perimeter. Nordstrom opened its first Atlanta location there in 1998, followed by Bloomingdale’s and Dillard’s, joining a Macy’s and 200 specialty stores. In 2000, several new restaurants, including Maggiano’s and The Cheesecake Factory, opened, all within walking distance.

GGP’s acquisition of Perimeter from The Rouse Co. in 2004 set off a new push to luxury retail.

Kemp said luxury specialty stores were only 5 percent of the total mix in 2004, a figure that will grow to 15 to 20 percent in two years.

Since 2007, 19 new and remodeled stores included Lacoste, Betsey Johnson, Stuart Weitzman and Zara, which will open a second Atlanta store next month.

“Retailers are very selective now, looking for only the best locations,” he said, though he thinks the current expansion slowdown is temporary.

Betsey Johnson opened its second Atlanta location, a 1,262-square-foot store in Perimeter Mall in August. Both its Lenox Square and Perimeter stores carry an expanding mix of lifestyle product, in 11 categories, from handbags to perfume and vintage replicas of Eighties-era dresses.

Stuart Weitzman opened a prototype store in Perimeter Mall in June, modeled on the Via Della Spiga unit in Milan that opened in 2006. Designed by architect Fabio Novembre, interiors are white Corian, a Dupont material. All 31 U.S. stores will eventually be updated in the same mold.

“The U.S. customer is cautious now, and not buying anything basic or traditional,” said Wayne Kulkin, president of wholesale and chief merchandising officer for Weitzman.

Further outside the Perimeter Interstate, 13 miles north, is Alpharetta, an affluent, underserved suburb soon to have a mixed-use urban-inspired project.

Set on 85 acres, Prospect Park includes 300,000 square feet of offices, 464 residential units, a boutique hotel and over 1 million square feet of retail, to open in 2010.

Alpharetta has attracted wealthy transplants to the city, including sports and music figures. More than 241,000 people with average household income of $126,000 live within a 7-mile radius.

North Point Mall, near the Prospect Park site, is the area’s only major shopping center, built 18 years ago.

“There’s pent-up demand here,” said Ward A. Kampf, president of retail leasing for Thomas Enterprises, a Newnan, Ga., developer. “In the past few years, everybody went to Buckhead or Midtown, and they’re all competing for the same customer.”

Alpharetta is one of the few “A-Plus” retail sites capable of attracting upscale tenants, said Kampf, with density, spending power and transportation access.

Prospect Park will be open-air with deck parking, at least six restaurants, a Whole Foods and a lounge seating a 16-screen AMC cineplex.

While Atlanta remains among a top city for key brands, the whole industry is facing unprecedented challenges and a fiercely competitive environment, Kampf said.

“Everybody’s leaning on the same retailers that are maxed out with 250 to 400 stores. Everybody’s looking for the next great concept to come along,” he said.

With the U.S. economy in crisis, tight credit and consumers strapped, developers are competing with emerging international markets from Dubai to China, said industry experts.

“There are areas with billionaires, and underserved areas,” said Ken Bleakly, president of Bleakly Advisory Group, an Atlanta consulting firm specializing in luxury development. “China has 10 locations of 300 million people, each one as big in population as the entire U.S.” While luxury is faring better than other areas, retail overall in the past 18 months has been stalling momentum on key projects.

Still, Atlanta, a long-established hub of the Southeast and an emerging international destination, with a new international airport terminal planned for 2011, is among retailers’ top 10 destination cities, said Bleakly.

As a developer, Ben Carter, founder and chairman of Atlanta-based Ben Carter Properties, knows urban and suburban challenges. He developed Mall of Georgia, the state’s largest center in Buford, Ga., in 1999. Now, his mixed-use Streets of Buckhead, a $1.5 billion project, is creating nine acres of in-town retail and residences, a new concept for Atlanta.

Carter says big malls around the city, many with 60-acre parking lots, need updating into town centers, with restaurants and entertainment.

“We need a change from the ‘mall’ idea, which nobody likes, to ‘town centers,’ with a real sense of place,” he said.

Not surprisingly, reinvention will be easier for affluent centers in wealthy locations.

“Owners need to adapt,” said Dufresne. “There are thousands of ‘B’ and ‘C’ malls dying, in the suburban ‘ghost mall’ syndrome.”