Consumer downloads of retail mobile apps are on fire, growing double-digits year-over-year with Amazon, eBay, AliExpress, Walmart Grocery and Walmart native apps leading the field of the top gainers, according to App Annie, the mobile data and analytics provider in its annual “State of Mobile 2020 Report.”

Researchers at App Annie also identified the “top trends to watch in mobile,” which is based on an “in-depth analysis of app downloads, usage and consumer spend in the iOS and Google Play Store,” the company said adding that the report covered retail, gaming, social media, finance, streaming and other industry segments.

“Mobile is a critical avenue for omnichannel growth,” authors of the report said. “It’s not just about converting through the mobile app, it’s about mobile driving research and consideration, and facilitating fulfillment — such as through in-store pickup and tracking of packages.” 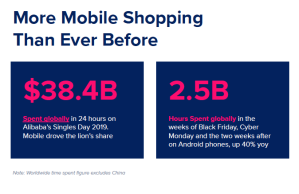 The report noted that the “strong correlation” found between total retail sales — online and in-store sales — and the time shoppers spent in shopping apps “indicates that not only are consumers turning to mobile to shop, but retailers are enhancing mobile experiences to better serve all phases of the buying journey — whether a user is browsing, checking out, facilitating pickup or tracking their purchase.”

Overall, retail downloads and usage has outpaced other industries and business segments, globally. Still, the number of downloads worldwide has experienced solid growth. “Annual worldwide downloads have grown 45 percent in the three years since 2016 and 6 percent year-over-year, which is particularly impressive given this excludes reinstalls and app updates,” App Annie stated in the report.

“Downloads are largely fueled by emerging markets, including India, Brazil and Indonesia,” the researchers said. “Consumers in mature markets like the U.S., Japan and [South] Korea have seen download growth level off, but are still seeking out new apps.”