The digital barrier between Black Friday and Cyber Monday is starting to erode, with more online shopping than ever starting as early as Thanksgiving Day. 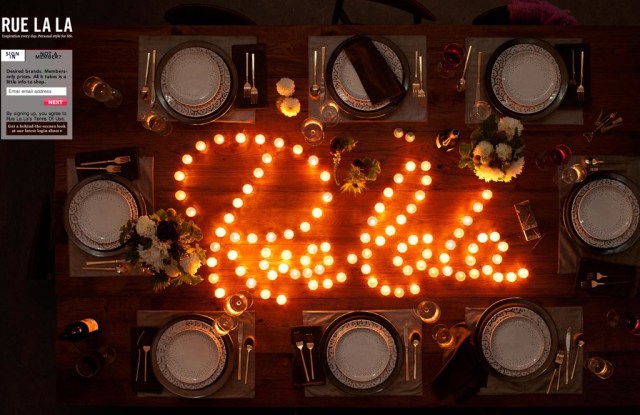 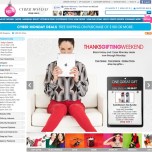 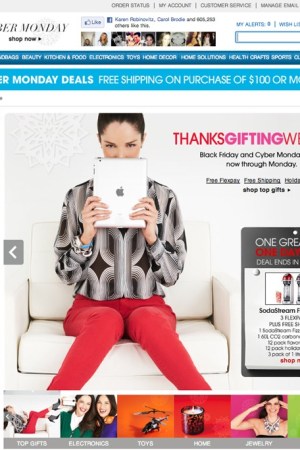 HSN had the strongest Thanksgiving weekend in its 35-year history.

While thousands flocked to their computer screens at home and work on Cyber Monday to take advantage of online deals, the digital barrier between Black Friday and Cyber Monday is starting to erode, with more online shopping than ever starting as early as Thanksgiving Day. The breakdown of the barrier results from one simple thing: improving technology.

Smartphones and tablets, as well as more widespread use of broadband Internet connections at home, are beginning to disrupt the retail calendar as consumers become increasingly comfortable transacting online. It’s allowing them to shop earlier, taking advantage of sales days before Cyber Monday.

While data for Cyber Monday won’t be available for several days, comScore reported that Thanksgiving Day e-commerce sales rose by 32 percent year-over-year to $633 million, and Black Friday sales saw a 26 percent increase to $1.04 billion. Forecasts were that Cyber Monday sales were expected to reach $1.5 billion, a 20 percent increase from last year. Research conducted by BIGinsight for Shop.org revealed that 129.2 million Americans planned to shop on Cyber Monday this year, compared with the 122.8 million who shopped online last year. Over 20 million intended to use a mobile device to shop (a number that’s increased more than five times from 3.6 million in 2009).

“More so than just online in general, mobile is solely responsible for this shift in the holiday retail calendar,” Steve Yankovich, eBay Inc.’s vice president of mobile, said. Mobile volume on eBay on Black Friday this year was 2.5 times higher than in 2011, with the site offering its iPhone app users exclusive access to mobile deals through Monday evening.

Instead of referring to the days as separate holidays, Yankovich calls Thursday through Monday the “Thanksgiving Roll,” a theory he said was proven by the transaction volume that eBay started to see on Thanksgiving. He noted that the e-tailer has added 1.8 million consumers — brand new to eBay via mobile — in the first three quarters of this year.

In addition to single-handedly causing a paradigm shift in terms of e-commerce, mobile has become a significant customer acquisition channel that borders on viral, due in part to an “old fashioned social” component that exists when people transact on their mobile devices in the company of others.

“It’s situational shopping. The consumer is in control of when and where, not at the computer and where it works,” Yankovich said. “The holiday calendar shifting and what it means to the consumer has been thrown up in the air once people become mobile shoppers.”

He contends that growth continues daily right up until the moment before Christmas, but eBay’s most recent focus with respect to mobile has been the convergence of m-commerce with the brick-and-mortar experience. Ebay Now, which saw a soft launch in San Francisco this summer and in New York on Nov. 15, uses geo-sensing location technology from Milo and seamless payment options from PayPal to provide same-day shipping to consumers from hundreds of retailers in as fast as one hour. The minimum order amount is $25 and the delivery fee now is $5.

“Users will get immediate satisfaction because someone will hand me what I bought in an hour. You can be on a park bench in Times Square and have it delivered to that bench, as opposed to a residential address. We have a map in the app. This is really changing the game — local shopping is a big deal this year,” Yankovich predicted, listing Target, Macy’s, Bloomingdale’s, A|X Armani Exchange, Foot Locker, Urban Outfitters and Ann Taylor as participating retailers. “It puts the convenience [of mobile] and the controlling of the purchase in the hands of the consumer.”

A survey conducted by Sybase 365, the mobile arm of SAP, and the Mobile Marketing Association earlier this month estimated that 87 percent of consumers will use a mobile device to help in making a holiday shopping decision. Findings also indicate that half of all consumers will make a purchase via m-commerce this season.

“More people have those devices and it’s easier to access content around sales. As for people shopping earlier, that can be due to the fact that more people are aware that these sales are even going on,” Forrester Research analyst Sucharita Mulpuru said of mobile’s growing presence as a commerce channel, suggesting that brick-and-mortar store openings Thursday night may have encouraged people to check corresponding Web sites as well.

For her, it’s not that Cyber Monday is becoming less relevant; the bigger theme is that online is now becoming a more integral part of Thanksgiving weekend.

“The big story for the Web is still Cyber Monday,” Mulpuru said, adding that the projected online sales increase of 15 percent this year will result in online sales of more than $68 billion in the U.S. for the holiday season. “Thanksgiving Day traffic will be higher than your average Thursday — but it’s not Cyber Monday. The fact is that people now recognize you can get the deals on Thursday, and that they have more access to those deals, as opposed to having to go into your home office. It makes sense.”

Convenience is key to shoppers — which has helped make Amazon.com the two-ton gorilla in terms of e-commerce as it harnesses its extensive inventory combined with fast and often free shipping.

At the e-tail giant, where the fourth quarter in general is the busiest, Black Friday and Cyber Monday serve as the biggest days saleswise. In 2011, Cyber Monday nabbed the top spot, resulting in 17.7 million items ordered worldwide, or a record breaking 204 items a second, according to a spokesperson.

The company predicts that this is the start of the “best holiday shopping season we’ve ever had.” Amazon’s Black Friday store opened on Nov. 1 and Black Friday deals started four days early on Nov. 19, where the e-tailer unveiled more Lightning Deals than ever.

Rue La La is also finding that Black Friday is becoming just as important as Cyber Monday in terms of generating online sales, with heavy shopping beginning on Thursday, said the site’s chief executive officer, Ben Fischman. Half of Friday’s business came from mobile and, overall, sales were up 53 percent year-on-year for the day (with transactions occurring at 3 p.m. or later surging by 190 percent).

Fischman called Thursday evening the new holiday for online shopping, specifically the post-8 p.m. time slot when people have finished their Thanksgiving dinners. Sixty percent of Rue La La’s sales that night were mobile, with the iPad comprising half of these purchases. He noted that 80 percent of all m-commerce purchases for the two days came from an Apple device.

Fischman said that in addition to selling “expected merchandise,” sales were very strong for big-ticket items in the $10,000 to $40,000 price points.

At HSN, the holiday shopping season kicked off in mid-October, according to HSN Inc. executive vice president of digital commerce Jill Braff, but ramps up significantly in November with a focus on “Thanksgifting.”

Online sales for both Thursday and Friday broke records for the holiday weekend and Braff said HSN had the strongest Thanksgiving weekend in its 35-year history. Overall, the site saw an increase in customers — 10 percent of new consumers were shopping Today’s Special on hsn.com between Thursday and Sunday.

“We focus on Thanksgiving but it’s not just about Cyber Monday in our mind. With digital in mind, mobile makes it easier for people to shop all throughout the holiday weekend — and that makes Cyber Monday less of an important single moment in time,” Braff said. “While businesses still think about shopping as being divided between brick-and-mortar and online, people don’t. People see it as boundary-less retail, and they don’t make distinctions about shopping on mobile, iPad or a computer. They take advantage.”

For the first time, HSN produced an interactive gift guide (it launched Nov. 12) for tablets to cater to its mobile audience, the fastest growing channel on the site. Through the third quarter, HSN has surpassed $100 million in mobile sales, and Braff expects this to continue through the holiday season. Due to the response to a 27-game arcade launch almost a year-and-a-half ago — which has seen more than 85 million game plays to date — HSN launched a holiday game, “Fashion Tale Holiday Hunt.” According to Braff, the rate of game plays was very high throughout the holiday weekend, with a “solid rate” of people shopping the game.

Besides the retailers, search engine-based shopping Web sites and bloggers who garner commissions from referral traffic are also generating significant sales. Cyber Monday (and the holiday season in general) is becoming an additional and viable revenue stream for bloggers, some of whom can make thousands of dollars in commission sales for the day.

Karen Robinovitz, cofounder and chief creative officer of Digital Brand Architects, is also a blogger manager who works with the likes of Song of Style’s Aimee Song, The Glamourai’s Kelly Framel, From Me to You’s Jamie Beck and Snob Media (which encompasses Bag Snob, Shoe Snob, Couture Snob, Jewel Snob and Tot Snob). Although she declined to give exact dollar amounts that the firm’s talent drives, she revealed that the holiday shopping season online could easily result in commissions that venture well into the five-figure realm from affiliates.

“Especially when people are promoting holiday shopping [it’s] a time where you’ll see a lot of product heavy content on a lot of sites and blogs because it becomes all about gift guides and their own purchases — many of which they are sharing through their sites and social media communications. I can’t image that there’s any digital publisher out there not using affiliate links,” Robinovitz said. This is the time when there are the best deals online and readers are looking to their favorite online influences for advice and what to wear, she added.

She pointed out the obvious — that it’s likely bloggers will link the affiliate that gives the highest percentage — but DBA always recommends its talent link to what they want to and keep it authentic, rather than being governed by driving retail sales through their sites.

The same goes for Shop It To Me, although on a much larger scale since referral traffic is the site’s primary source of revenue. Described as “a personal assistant for shopping,” shopitome.com suggests brands and products to users based on their personal preferences from leading retailers.

According to Shop It To Me founder and ceo Charlie Graham, the site can see as much as three to five times more revenue from referrals than a normal day. Black Friday typically generates slightly higher sales for the site, but Cyber Monday is one of the top three to five days for business, according to Graham, who calls online shopping “the trigger” for the holiday season getting earlier and earlier.

“Everyone is trying to beat each other to the punch to get dollars, and they’ve been moving sales earlier because people can shop from laptops, phones and computers. It’s OK for a site to put up a presale,” Graham said. “I now call it Thanksgiving Week sales — because there are presales on Tuesday, Wednesday and Thursday.”