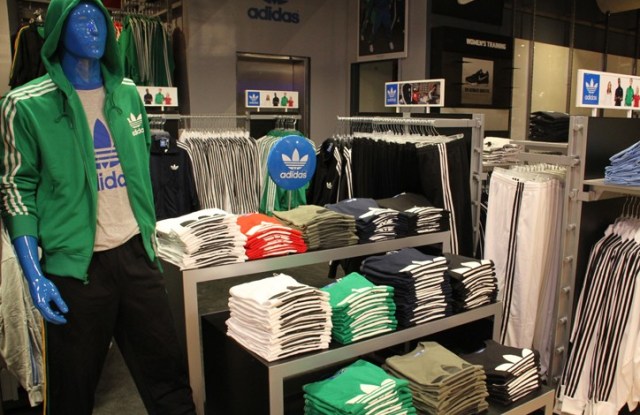 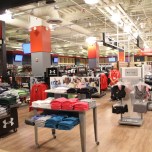 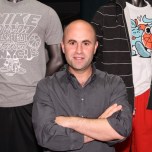 Over the past year, the 144-unit, $600 million, New York City-based retailer has revamped 90 percent of its stores, with the remainder slated for upgrades by the end of the year. The remodeling campaign creates “category shops” for top brands and provides shoppers with a cleaner, less cluttered appearance, wider aisles and easier sight lines.

“We took all the key learnings we had from our rebirthing program and amplified it for Times Square,” said Modell’s president Seth Horowitz during a preview of the store. “When it came to the flagship, we had to do something unique. We want this to be the best sporting goods store in the world, so we pushed the limits in every way that we could.”

Among the features exclusive to the store is an area inside the front door where customers can buy discounted same-day Yankees tickets, a service found nowhere else, Horowitz said. The store will have a 30-foot-by-10-foot LED screen in the street and a wall of video monitors inside to show events. There will be an emcee in-store that at various times throughout the day will choose a customer to attempt a regulation foul shot in the Nike department. If he or she makes the shot, everyone in the store will receive a gift.

The store will offer a cap-embroidery station for customized hats and will sport the only retail location for the popular high-end footwear brand, Athletic Propulsion Labs, currently sold only online.

On the merchandising end, the store will offer “four key brand statements” for its top branded vendors: Nike, which will dominate the main floor with more than 4,000 square feet; Under Armour; Reebok, and Adidas, as well as a “one-stop shop for all licensed products,” Horowitz said. A stadium-inspired graphic over the staircase to the lower level will feature 72 jerseys as a statement to lure customers downstairs. Once there, shoppers will find an assortment of merchandise from Major League Baseball, the NFL, the NBA and the NHL. There is also an Everlast shop, an area for soccer merchandise and another for Mitchell & Ness. Champion is also featured upstairs.

“It’s 80 percent what we do [in other stores] and 20 percent above and beyond,” Horowitz said.

Although he declined to provide a volume figure for the store, Horowitz said the Times Square unit is “a top five store now, and we expect it to rise in the rankings.” With more than 500,000 people walking past it every day, the unit should attract locals, commuters and tourists. “With the focused marketing campaign we’re planning, this store has great potential.”

Horowitz said Modell’s will work with NY & Co., the city’s tourism arm, to seek out visitors, while the “raised level of product” should appeal to New Yorkers.

In order to enhance its standing in the city, Modell’s on Thursday will also open two stores on the Upper West Side — 97th Street and Columbus Avenue and 78th Street and Amsterdam Avenue. The grand-opening celebrations for all the stores will be on Aug. 26 and will feature special promotions and player appearances. With these two new stores, Modell’s will have 16 stores in Manhattan.

“In New York City, our biggest competitor is time and income,” Horowitz said. “So we have to make Modell’s the place they have to come to.”