The company, which was briefly based out of Los Angeles, sells mostly private-label staples for daytime. 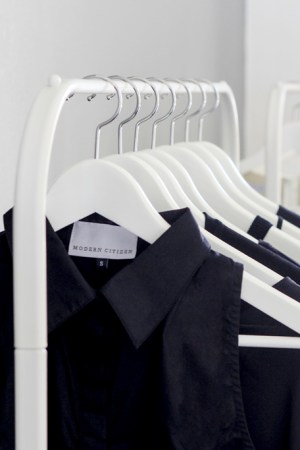 Modern Citizen’s moved back to San Francisco and will on Thursday celebrate the opening of its new 1,300-square-foot showroom on Octavia Street, where shoppers can make appointments to try on the latest looks from the digital startup.

The company, which was briefly based out of Los Angeles, sells mostly private-label staples for daytime. And while it was technically born online, founder Jessica Lee contends that Modern Citizen has been omnichannel from the start.

“Having a Web site and a pretty one at that just isn’t enough for a customer to experience your product,” Lee said. “For us, it’s more, ‘How can we continue to think outside of the box?’”

The company’s hosted desk-to-dinner events from its inception, bringing its trunk show-style showcase to offices and placing its brand in front of its target of working women in their late 20s to early 30s. It’s parked its temporary shops in the offices of companies such as One Kings Lane, Facebook and Square. These pop-in events are a sizable component of the business and something the company’s looking to further refine, according to Lee.

“From those we learned the in-person experience as a new brand is invaluable,” she said. “And we knew that we wanted to replicate that [in the showroom].”

The showroom is not only a place for commerce, but also serves as an event and workshop space to bring in female executives with backgrounds in business or technology to share career advice. It will also serve as a home for classes on flower arranging or other crafty skills.  The first of those events, aimed at networking, is set for later this month.

Prior to Modern Citizen, Lee was involved in e-commerce strategy and business development at Gap Inc., where she worked on different business cases across the company’s portfolio and researched potential acquisition targets in the vein of ModCloth and Nasty Gal.

They’re brands that helped pave the way for successful born-online brands and certainly provided good case studies for Modern Citizen and other businesses like it.

“We look to them more with admiration for the brands they’ve built and the communities they’ve built, but the environment is different now,” Lee said of those early e-tail start-ups.

There’s more competition among e-tailers with new brands. They are looking to serve a niche consumer and, increasingly, e-commerce is just one facet of a multichannel approach customers have now come to expect.

The company raised a friends and family round, soliciting female entrepreneurs in the manufacturing and fashion spaces along with a small investment from a venture capital firm.

They’re currently contemplating whether or not to go out for an additional round of fundraising. The company is already profitable and wary of institutional capital, which could bring more pressure to grow.

Modern Citizen began dabbling with push commerce about three months ago, which sends new looks to customers as soon as they come out. The pilot began with five women and is now at just under 100 women.

“At the end of the day, we’re looking for something to add value,” Lee said. “We never want it to feel like it’s forced on you. We’re trying to build a destination for the modern woman, not just a sales channel.”