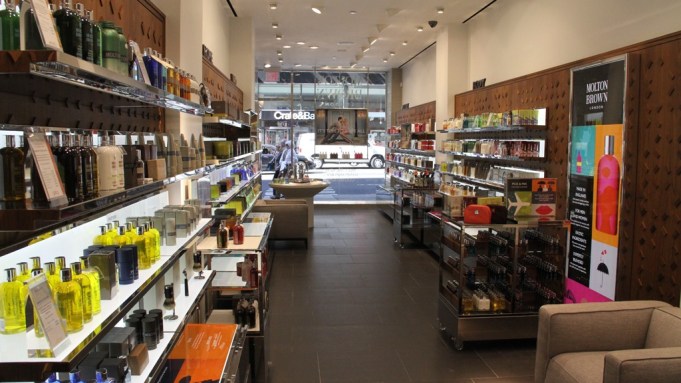 Molton Brown is entrenching itself deeper into the New York cityscape with its first U.S. flagship, on Madison Avenue. The 843-square-foot space, meant as an homage to nature and science, is expected by industry sources to do about $2 million in its first year, or roughly 75 percent of the business generated by the brand’s U.K. flagship.

“Our flagship in London is on Regent Street [with] very high visibility, and we wanted to have the same thing in New York,” said Amy Nelson-Bennett, chief executive officer. “When we opened that one in the U.K. about 10 years ago, it transformed the brand in terms of a visibility statement. [It showed] we were a serious luxury brand. Our feeling is it’s going to do the same in New York.”

Located at 635 Madison Avenue, the store opened its doors on Saturday in a move also to coincide with the brand’s 40th anniversary this year.

A main focal point of the new store is a stainless steel sink and Corian hub, which will feature a color-specific fragrance family wheel to facilitate scent discovery. “At the core of our business are washes and gels and discovering the art of bathing,” said Mark Johnson, general manager, Molton Brown Americas, adding that this fall the brand also updated its core fragrance packaging to look more “British contemporary. It’s all about play and immediately welcoming customers in the store,” he said.

The new store will also house all of Molton Brown’s more than 200 stockkeeping units on updated counter fixtures, which feature both back and bottom lighting and a mixture of wood elements and mirrors.

“Our old shop fits were very heavy; wood was a very significant feature,” said Nelson-Bennett. “Now we are using light and mirroring, [to] make the color of products sing. We are also arranging products by fragrance families so people can understand the fragrance.”

According to Nelson-Bennett, despite having 57 stores globally, mostly in the U.K., it is the U.S. where the company sees the most growth opportunity. “We are focusing on the market which we feel has the greatest potential for growth across all our distribution channels — stores, e-retail, department stores and hotels — and luxury consumers who demonstrate a strong appreciation of quality, craftsmanship and our exotic influences,” said Nelson-Bennett. Next up for Molton Brown? A deeper dive into hair and hand care, as well as more offerings in the home category for January.