"Moncler: A Tribute to New York" comprises a special collection designed by Thom Browne and a video-music film realized by Spike Lee. 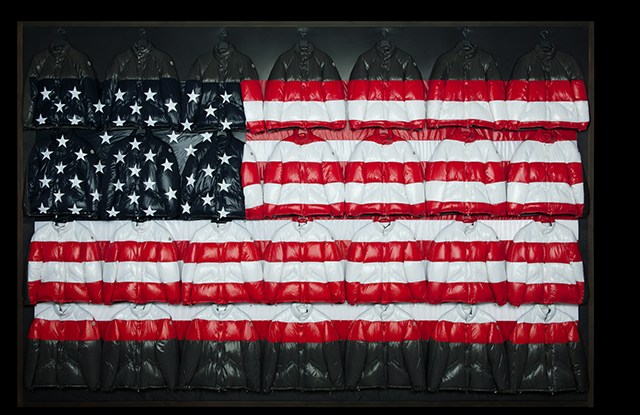 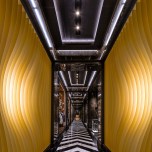 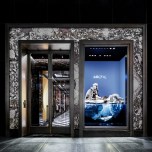 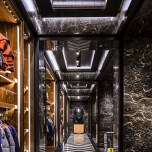 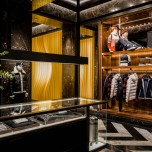 MILAN — Moncler will celebrate New York today with a special collection designed by Thom Browne and a video-music film realized by Spike Lee. The projects mark the official opening of the brand’s Madison Avenue flagship, its biggest unit in the world. The American market is key for the luxury brand and, to wit, the event is titled “Moncler: A Tribute to New York.”

The boutique, covering 6,500 square feet, is the brand’s second location in Manhattan after its Prince Street venue, which opened in 2009, and its 20th location in the Americas.

“Coming to Madison Avenue is a significant step in solidifying the brand’s global footprint,” said Moncler chairman and chief executive officer Remo Ruffini. “This 59th Street intersection is at the retail heart of Manhattan and one of the busiest crossroads in the world. With our Prince Street location, we took our first steps towards establishing our retail presence and speaking to our customers in a very specific and intimate environment. With this location, we are taking a global approach by bringing together all the elements which compose the ‘world of Moncler’ to elevate and expand our brand identity.”

Ruffini has been insisting on focusing on the local consumer as a priority in the brand’s development. He conceded that the U.S. dollar dented local tourism in the region but was not overly concerned, taking a wait-and-see approach. “Flexibility and logistics” were fundamental, he said.

Browne reimagined Moncler’s iconic down jacket for an art installation, called “USA Flag, 2016,” created specifically for the flagship. The installation comprises 28 down jackets in a special edition, realized with precious materials and details of the American flag. The jackets, each in the same model but different from one another, make up the flag as in a mosaic on a wall of the boutique.

Each of the 28 jackets, unique and numbered, will be available only online on moncler.com and proceeds will be donated to the New York-based organization Robin Hood to support its fight against poverty.

In addition to the art concept, and again only in the Madison Avenue store, there will be a special collection designed by Browne of down jackets, cashmere sweaters and other items symbolic of the American flag.

Lee conveyed his love and respect for New York in a five-minute musical film titled “Brave,”  blending fluid rhythms, ska and funky echoes. The music is modeled after the sounds of the city, emphasizing its multiethnic flavor. “I deeply believe that New York City is the greatest city on this God’s earth,” said Lee. “I am a storyteller. And I decided to film on a sweltering muggy August day, probably the hottest day of the year.”

The name of the film — featuring dancers Lil Buck, Jon Boogz and Damaris Lewis — comes from the lead song “Brave Suffering Beautiful,” from the off-Broadway musical “Total Bent” by Stew and Heidi Rodewald.

The film begins with Lee reciting the sonnet “The New Colossus” by American poet Emma Lazarus, inscribed on a bronze plaque on the pedestal of the Statue of Liberty. “Lady Liberty’s Flame,” said Lee, “welcomed millions of people arriving in the United States of America. Their first step onto American soil was in New York City. I hear that in this song, ‘Brave Suffering Beautiful,’ which holds the essence of what it means to be an American in this particular period in time.”

Lee said that to create the short film, he had to rely on his skills as a storyteller.

“First of all, you have to have a story worth telling. We have that. Our story takes place on a hot August summer New York dog day. This city comes alive when the heat is beating down upon the heads of its eight-and-a-half million inhabitants, all whom have a love-hate relationship with their beloved city.

“We will show New York City in all of its magnificent glory and some of its ugliness. We will see the richness of the diversity, people of all races, colors, sexual orientations and speaking languages from all over the world. People from New York are loud, vibrant, movin’, groovin’ at a break-neck pace,” explained Lee. “New Yorkers, from the top to bottom, get their hustle on, always trying to get in where they can fit in.

“When you think about NYC, you think about music. Music is one of the key components of all my film work. I love music and you can see that in my three decades as a director. I will find a song that has a beat, the beat of eight-and-a-half million pilgrims trying to make it work the best way they know how. The music will soar as will the voices in it. The lyrics will inform us…. What it means to love, live, struggle and survive in da big bad city. With all great music, when you hear it, you gotta move. You gotta dance. Dance will also be a big part of the story. The cinematography will have eye poppin’ colors and at the same time deliver the grittiness of NYC.”

Browne’s and Lee’s visions and affinities come together in the film in the final scene where the director appears wearing a duvet jacket created especially for the short by the designer.

Speaking of working with Browne and Lee, Ruffini underscored the “energy and emotions” the two artists brought to the project. He noted that there were no political implications with the references to the flag, which should be seen as “an emblem in honor of the city.”

The boutique, which unofficially opened in October, is designed by Moncler’s go-to French architects Gilles & Boissier.

Ruffini, who orchestrated Moncler’s turnaround and publicly listed the company in 2013, said there is growth potential in the U.S. as the brand’s retail development in the region took place later than for some of its luxury competitors. “Also, we had to carefully evaluate the locations so that they would fit with our product. We were concerned about opening in Miami and Las Vegas, but we’ve seen sales double in those stores. We now have to consolidate our units and offer experiences locally,” he said.

The Madison Avenue location features 14-foot ceilings and a monumental window sits adjacent to the boutique’s entryway. Flanking the window is a dramatic hallway that runs the length of the store, paved in black-and-white chevron marble. Belgian artist Bardula conceived a kinetic light sculpture exclusively for the flagship, which stands at the entrance. This symmetrical installation, named “Solaris,” consists of 24 gold metal blades, each 13 feet in height, that face each other and expand geometrically in relation to the visitor.

The contemporary sculptural element is juxtaposed against a classic sculpture of a head titled “Tête Moncler” by French artist Christophe Charbonnel, who was inspired by the first ads for the brand, showing an adventurer with a growing beard. Charbonnel’s sculpture is a hybrid of his original work “Goliath” and the artist’s personification of the Moncler brand. A number of contemporary works are juxtaposed against the Moncler collections.

As in the company’s boutiques worldwide, chêne fumé wood paneling is used for the walls and ceiling, which contrasts with the modern displays in glass and metal. In the New York flagship, lacquer walnut wood bays with brass accents add a warm touch. Also new to the design concept are subtle textural elements such as the red shagreen-effect leather ceilings and contrasting white leather ceilings. There is also a room reminiscent of a library, or a salon and cabinet of curiosities.

As reported, strong expansion in all international markets and growth in both its retail and wholesale channels helped Moncler SpA register a 14 percent gain in revenues in the first nine months of the year, which reached 639.3 million euros, or $709.6 million, with Ruffini emphasizing “focus, exclusivity, clarity and selectivity” as pillars of the brand’s development strategy.

In the nine months, retail sales grew 20 percent to 400.4 million euros, or $444.4 million, lifted by both the ongoing development of the group’s directly operated stores and organic growth. The division accounted for 63 percent of total sales in the period. International markets represented 83 percent of total revenues.

The Americas were up 17 percent to 109.7 million euros, or $121.7 million, boosted by a strong performance of the stores opened in the last 12 months, such as in Hawaii, San Francisco and Las Vegas, and solid results in the wholesale channel at luxury department stores. In the third quarter, the channel also benefited from the opening of four shops-in-shop in Toronto, Los Angeles and two in New York. There are plans to open 12 shops-in-shop in America next year.