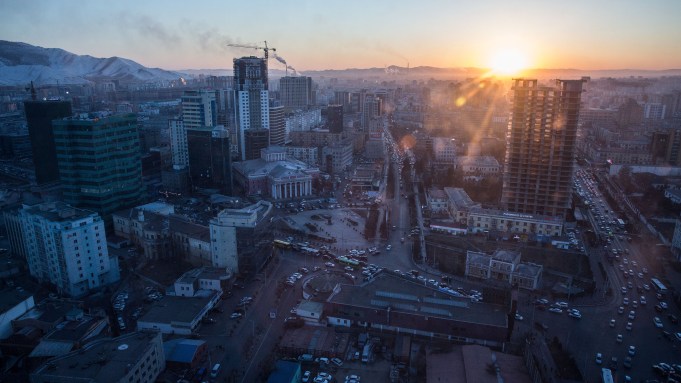 ULAANBAATAR, Mongolia — Once touted as an emerging retail market due to its commodities boom and fashion-forward denizens, Mongolia — a land-locked country flanked by two economic giants — is now trying to find its way out of a slump.

Boasting economic growth of 17.5 percent in 2011, Mongolia was expected to be a new territory for luxury brands and retailers to establish a foothold. Ahead of the curve, Louis Vuitton and Ermenegildo Zegna opened flagships there in 2009, while Burberry, Hugo Boss and Stuart Weitzman followed suit.

But since then, GDP has steadily decreased due to the country’s heavy reliance on the mining sector, which was rocked by plummeting commodities prices in a global slowdown.

Despite that, Mongolia has appeared on A.T. Kearney’s 2015 Global Retail Development Index in fifth place. With a retail growth rate that is the highest of any developing market in Asia, A.T. Kearney marked the country as “a small gem to watch.”

According to statistics provided by Asia Pacific Investment Partners, Mongolia has experienced an overall increase in retail revenues from 2011 to 2015. However, the growth rate has slowed significantly year-over-year — 2012 brought a 149.9 percent revenue increase to $3.6 billion while 2014’s rise was 6.3 percent, bringing the year’s total to $4.6 billion.

If the slump has finally caught up with retailers, they still remain hopeful that the country’s agreement with the International Monetary Fund, inked in February, for a $5.5 billion economic bailout plan will help revive the economy.

“Due to the recent developments on the IMF, as well as the economic forecasts, we believe the economy is rebounding strongly and will have an impact on the average wage, as well as on retail sales,” she said, adding that the real jump is likely going to come in two years.

“The economic growth in 2017 and 2018 is projected to be around 1 to 2 percent. Hence I don’t see any major growth in retail sales in these two years, but from 2019 onward, it might grow quite drastically,” she said.

The sector has also proven to be a bright spot for real estate sales in recent years, despite the slowdown.

“The demand for retail space has been quite high in the past and will continue for the next couple years,” Gerelsaikhan said. “If you compare prime office space occupancy rate, which is around 70 to 80 percent, the prime retail space is almost at 100 percent at the moment.”

Indeed, consumer activity within the city appeared to continue unabated through Ulaanbaatar’s cold winter. The State Department Store, the city’s most popular and famous shopping spot, is consistently packed with Mongolians, young and old, at various times of the day. Stocked with midrange brands like Mango, Levi’s and Puma, the store fared better in terms of foot traffic compared to its neighbor down the street, MCS Central Tower — home to luxury brands like Burberry and Louis Vuitton.

A few blocks southwest is Naran Group’s Naran Mall, which houses Calvin Klein, Swarovski and Esprit, among many others. Udval Dendev, chief executive officer of Naran Group, said that her company has been hit hard by the slowdown, with revenues for the past year dropping by 50 percent.

“People have started to buy midrange brands more and more….This has affected Naran Group very badly, because our company imports expensive brands, and I can say that the sales of expensive brands have totally stopped,” she said, explaining that big-ticket luxury items, like cars and expensive watches, are no longer selling.

“For example, Naran Motors is one of our group’s 14 subsidiaries and it imports the luxury car brand BMW. But this year, sales have been so bad we’ve just completely stopped importing it. Now, only servicing the car is available,” Dendev said. “On the other hand, cosmetics and clothing have still been doing well, so this balances things out.”

Because of Mongolians’ appetite for fashion, Dendev believes that the country still has the potential for retail growth despite the mining slowdown.

“The country has four seasons and there is a demand for people to buy different clothes for different seasons. Clothing is still doing the best in our company,” she said. “Mongolians also tend to buy international brands and high-quality products, so I think there is still opportunity for new brands to enter the market.”

Contrary to how international onlookers saw Mongolia during 2011 to 2012, Batsuuri Haltar, an independent economist, considered the boom years to be a mirage.

“When the economy was good, we kept borrowing as if we were never going to pay it back. Those huge growths we experienced in 2011 were mostly due to the huge amounts we borrowed,” he said. “For every single dollar that came into the economy, we were spending $5 or more. The growth was fueled by the borrowed money.”

Despite the government’s relief over the IMF’s bailout plan, there are still a lot of problems ahead, he said.

But he, too, believes that the fashion and retail sector will be sustained for one simple reason: inequality.

“We have to be realistic that we have a certain number of people here of a higher income and they will never be poor. It doesn’t depend on the economy of the country,” Haltar said, adding about 10 percent of the country’s population of 3 million people are in this class, made up of mostly senior government officials and mining tycoons.

“The fashion industry is targeting this wealthy group of people, so it might still be booming despite the fact the country is experiencing difficulties,” he said. “It will always have demand in Mongolia because we still have that reserve group of people who will always be the customers.”