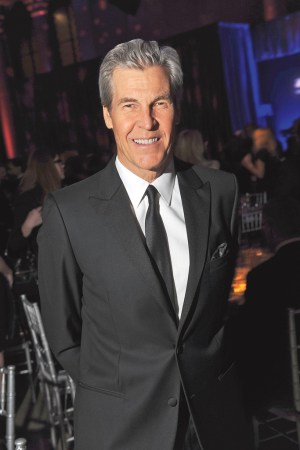 Ssense Enters Beauty, Home, Pets and More With ‘Everything Else’

That’s plenty to chew on, but what was hard to swallow was the overriding message that retailers must continue to operate in an increasingly pressured, complicated and uncertain business climate and probably won’t do much better this year than last.

“We are living in a world of panic, pain, anxiety and insomnia,” said Donna Karan, during her keynote speech at the convention, where she advocated mixing business with philanthropy and well-being.

“It’s going to be a tough year for all of us to navigate, specifically because of consumer confidence,” driven down by ineffective politicians, said Howard Schultz, ceo of Starbucks. “Our voice must be heard. Send a message to Washington that we deserve better.”

There was this burst of excitement and top-line growth from new technologies and people — many of them from outside the traditional places where retailers come from — using personal inspiration and new technology to build businesses that are providing excitement today.

The NRF is always a key event — a spectacle of technology companies displaying the latest in software and hardware, with a huge turnout at the Jacob K. Javits Center, more than 27,000 this year, and a noticeably higher level of international participation.

Marquee names in the industry were present to set the tone for the new year, either as speakers or to receive awards. Amazon founder Jeff Bezos received NRF’s Gold Medal Award, but, to the disappointment of many, said little about the company he founded. It’s a conference where people come to hear more about current corporate strategies, and less about corporate history.

“The energy level of the conference mirrored that of the economy and growth expectations — sluggish,” said Robin Lewis, ceo and managing editor of The Robin Report. It might have had something to do with retailers persevering through a challenging holiday season and Hurricane Sandy, and agonizing over Washington politics, or presenters reluctant to share their best practices. Many in the crowd seemed relieved but not quite over the roller coaster that was Christmas, where sales results fell below expectations — low, single-digit gains for most. And more of the same is seen for 2013.

At Tuesday’s pricing session centering on whether consumers can be weaned off coupons and price promotions, Mark Cohen, professor of retailing, Columbia University Graduate School of Business, suggested it was impossible. “The whole notion of educating the consumer is a conceit,” he said. “It’s a fool’s game. Either you’re down and dirty like Wal-Mart or Dollar General, or you’re Louis Vuitton. Don’t think you’re going to educate the consumer. It’s not going to happen.”

Matthew Rubell, senior adviser, TPG Capital and former ceo of Collective Brands, gave his formula for proper pricing, which is largely based on the competition’s prices, the region where the products are being sold, and a projection on the price at which products could be liquidated. “That’s how you find the right price up front. To me, that’s the wave of the future.…You don’t get to educate or convince your customer.” Rubell added that eliminating the promotionality of department stores “à la Penney’s is something I don’t think we’ll see anyone do in our lifetime.”

Among the keynoters, former U.N. Secretary General Kofi Annan, a native of Ghana, said the problems of developing economies will be solved at the national and local levels with the business community, and that intra-Africa trade, while now very limited, represents a $300 billion opportunity. “Africa is attracting quite a lot of interest and not just in oil and mining, but also agriculture.” His advice to retailers crossing borders: “Don’t walk into a situation and think you know more than the natives. You should listen to them. Research the needs of societies.”

Kip Tindell, ceo of The Container Store, said, “Businesses can put purpose right alongside of profits. It’s not what you sell, it’s what you stand for.” Conscious capitalism “makes customers feel like they are part of the company.”

In a world of “panic and pain,” said Donna Karan, “It’s time for our vision and passion to propel a platform that makes sense and [raises] consciousness. Consumerism has a whole new world. It used to be about ‘me,’ but now it is about the ‘we.’

“In many ways, my life is defined by birth and death,” she said. “When I started losing my friends to AIDS, I realized I can no longer only dress people. I had to address them as well.” So Karan became instrumental in creating Seventh on Sale. “I had a vision of bringing designers, retailers, press and consumers together to create awareness. It was then that I learned how effective conscious consumerism could be. Seventh on Sale was just the beginning of this movement.”

When her late husband Stephan Weiss was diagnosed with lung cancer, “It was a wake-up call. I realized there was a missing link in health care and education.” With Urban Zen, “I was able to bring retail, a foundation and a center all under one roof. Urban Zen not only embodies my philanthropic passions but also my passion for design, dressing and addressing people, both from the inside and the outside,” she added. “It’s a business model where we connect the dots for philanthropy and commerce and a percentage of net sales benefits the Urban Zen Foundation.”

The message continued at a seminar on “Doing Well by Doing Good” led by Carly Fiorina, the former ceo of Hewlett-Packard and now chairman of Good360, a business that collects and recycles what companies would otherwise discard. Two retailers demonstrated how, working with Good360’s network of more than 33,000 nonprofit organizations receiving the recyclables, they improved their bottom lines, burnished their brands and gave back to communities where they do business. “We never thought there would be a demand for our store materials and displays,” that were no longer needed, including disco balls once used for holiday decorations, said Jeannette Ferran Astorga, vice president of corporate social responsibility at Ann Inc. The result has been “cost savings, business efficiencies and reduced waste to landfills, as well as a number of associated benefits,” such as employee engagement and consumer approval, she said. “Our clients tell us they want us to have a positive effect on the communities we touch and have a positive impact on the environment,” Astorga said.

Fred Wacker, chief operating officer of Home Depot Foundation, said the association with Good360 has been an integral part of the company’s more than $150 million in products donated to more than 2,000 nonprofit groups in the last decade. He also said Home Depot employs more than 35,000 U.S. army veterans and has spent about $80 million on veterans’ housing.

And yes, there were some newsmakers, among them:

• Wal-Mart U.S. ceo Bill Simon vowed to source $50 billion worth of goods made in the U.S. over the next 10 years.

• NRF president and ceo Matt Shay spelled out three lobbying priorities: to get the corporate tax code reformed, to open new markets for American goods, and to fix the broken immigration and visa system “to attract the brightest and most gifted workers from around the world” and encourage tourism.

• Lundgren said Macy’s had “a great year in spite of all the uncertainty” revolving around the economy and Washington gridlock. Lundgren retired as NRF chairman after three years and turned those reins over to Saks Inc. chairman and ceo Steve Sadove who will perpetuate the message that Lundgren and the NRF brought to Washington, that retailing means jobs. Lundgren said an economy growing at 4 or 5 percent would ease concerns and rev up retail investments. But at the current 1 to 2 percent, “it’s been limping along.”