The brand, known for its irreverent fashion sensibility and whimsical sense of humor, will open its first store on the East Coast today. 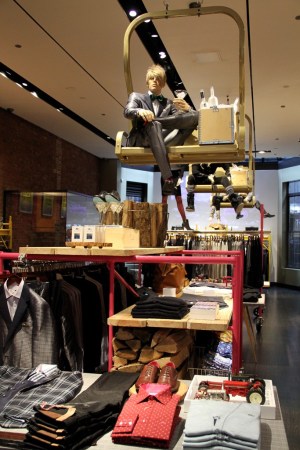 Pink tractors have been cropping up on billboards around Manhattan for the past few weeks. It’s a tease for the first Moods of Norway store on the East Coast.

The quirky Norwegian brand founded by Stefan Dahlkvist, Simen Staalnacke and Peder Børresen 10 years ago, today will open a 2,300-square-foot store at 75 Greene Street in the heart of the SoHo shopping district. The store has sent out blonde wigs as the invitations for the Really Really Blonde Party it will host at the store for Fashion’s Night Out, where it will serve waffles, present a performance by the band Poolside and bring in a few live sheep to help celebrate the milestone. “We’re going to have the running of the sheep on Greene Street,” said Dahlkvist.

Moods of Norway was founded in the town of Stryn, Norway (population 6,750), and has built a reputation for its irreverent fashion sensibility and whimsical sense of humor. Its slogans include “Happy Clothes for Happy People,” and the tags inside its jackets read: “Made in Europe by really, really, pretty blonde girls.” The goal of the company is to “make our grandmas proud.” The outside of its suit jackets are embroidered with the figure 234,243 — the number of registered tractors in Norway.

Despite the never-ending jokes, Moods of Norway’s business is quite serious. The brand is expected to have sales of $60 million this year and it has a 92 percent recognition rate in its home country among its target audience of young adults between 20 and 30 years old. The company designed the 2012 Summer Olympics uniforms for Norway and it has been nominated for a Rising Star men’s award in the U.S. It recently brought industry veteran George Santacroce on board to serve as chief executive officer for the U.S. market and the plan is to have between 12 and 15 stores in America as well as a strong e-commerce component and wholesale distribution targeting specialty stores and select department stores. “Our growth strategy is very strategic,” Santacroce said. “We know the best way to build brand awareness and loyalty is by having our own stores.”

So step one is the SoHo unit.

“This has been a dream of ours for 10 years,” said Dahlkvist.

“Norwegian fashion has four seasons and we think that will fit well in New York.” Børresen added: “And now we’re bicoastal.” Three years ago, the company entered the U.S. retail market with a store on Robertson Boulevard in Los Angeles. It operates 15 stores around the world.

The Greene Street store, with neighbors that include Nicole Miller, John Varvatos, Onassis and J. Lindeberg, was designed by Foundation Design in nearly 30 days. The theme for this fall is “cocktail mountaineering” and displays include brightly painted scaffolding surrounded by stacks of wood, pick axes and vintage toy tractors. Three gold chairlifts are suspended from the ceiling and the interior is a colorful orange, white and gold. In addition to the men’s and women’s apparel, the store also sells Freia candy bars, bags of Vafler (traditional Norwegian waffle mix) and King Oscar sardines. Two large video screens show films of the fjords of Norway.

The men’s collection ranges from tailored clothing and cocktail suits to jeans and T-shirts, or “different clothes for different moods,” said Børresen. The founders expect the knit woven shirts and knitwear to be the most popular items here. Prices range from $119 to $149 for shirts; $399 to $599 for jackets; $49 to $69 for T-shirts and knitwear, and $179 for denim.

Women’s wear was introduced three years ago and currently accounts for around one-third of the company’s volume. Categories include dresses, knitwear, blouses, jeans and jackets.

“We’re truly a lifestyle brand now,” said Santacroce. “They’ve created a cult following among the youth in Norway and I believe it fills a void here. There are many casual and high-end brands, and Moods of Norway plays with Etro and Ted Baker but is more affordable and has a genuine point of view and heritage.”

The company does no traditional advertising and relies instead on event-based and guerrilla marketing to help get its name out.

Beyond the U.S., the plan is to expand internationally with a new distributorship agreement in Germany and exploration of the U.K. and French markets.

“We know Stryn is not the fashion capital of the world, but that’s what makes it cool,” said Børresen. “We’re doing things we’re not supposed to do.”