Alberto Repossi, the Monte Carlo-based jeweler to celebrities and royal families, opened his first store in the U.S. last month on Madison Avenue. 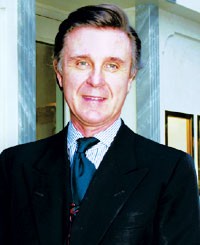 The Monte Carlo-based jeweler to celebrities and royal families is, of course, describing his first U.S. store, which opened Sept. 27 at 609 Madison Avenue near 58th Street. Even for a jewelry store, the 225-square-foot Repossi unit appears small and scrunched among the phalanx of bigger competitors such as Bulgari and Cartier. Yet Repossi’s gray, neutral decor and facade create a most suitable setting. Against the clean and simple backdrop, the oversized rubies, heavily detailed diamond and gold necklaces and bracelets and intricate facet work become all the more sparkling and mysterious.

Although small in volume — at 30 million to 35 million euros, or about $40 million at current exchange, last year — the privately owned Repossi business has a wide range, from a $500 “moon ring” with a cratered, lunar-like surface, to a one-of-a-kind yellow and white diamond cuff bracelet set in 18-karat white gold, priced at $671,000.

At the core of the assortment are themed collections laden with sentiment and “celestial” seasoning, if you will. There’s the Love array of pendants, earrings and rings that spell “love,” and Astrum necklaces and rings are inspired by the Zodiac. There’s also a selection of moon rings and necklaces, and a pared-down but elegant Gaia collection, designed by the owner’s daughter, Gaia. For the very sentimental, there’s a “Tell Me Yes” diamond necklace that retails for $10,000, though messages of passion can be customized on various pieces to suit the mood and occasion. Watches priced from $1,500 in black stainless steel, to $20,000 in diamonds and gold, also are offered.

At the highest price points, Repossi, in his soft-spoken, understated manner, displays a 60-carat ruby ring with a white gold band, part of his Cupid ruby collection sourced from a Burma mine. About the size of a Dunkin’ Donuts Munchkin, Repossi values it at $1.2 million, but adds philosophically, “What is money? Nothing. Money you can always find. But not the rock. I don’t think I will be able to find another like it again very quickly. It awaits a client.”

It’s the kind of rock that won’t remain stationary for long. Repossi, president and owner of Repossi Joailliers and grandson of G. Pietro Repossi, who founded the company in 1920, travels each month to a different country to personally present his latest and most prized jewels to his best clients. He’ll also customize pieces, whether they are new or previously purchased. Aside from serving as the brand’s chief emissary, he sources the stones and designs the jewelry, and he firmly believes providing a steady influx of new merchandise and personal attention is important. “My clients have everything already,” he said. “But they always love to shop. We have to have something new every month.”

Repossi has two other freestanding stores, in Monte Carlo and Paris, 23 Repossi shop-in-shops in Japan, seven in-store locations in Saudi Arabia, another in Harrods in London and in-store boutiques will begin to open in Lane Crawford in China this December.

At the Madison Avenue shop, “We have to do at least $5 million to $6 million [in sales] to break even,” Repossi said. His next U.S. store may be in L.A., where once again he’ll be catering to “those who have everything” but are looking for more.