The brand makes a point of not taking itself too seriously.

Moose Knuckles makes no apologies for its use of fur, which is Saga-certified. 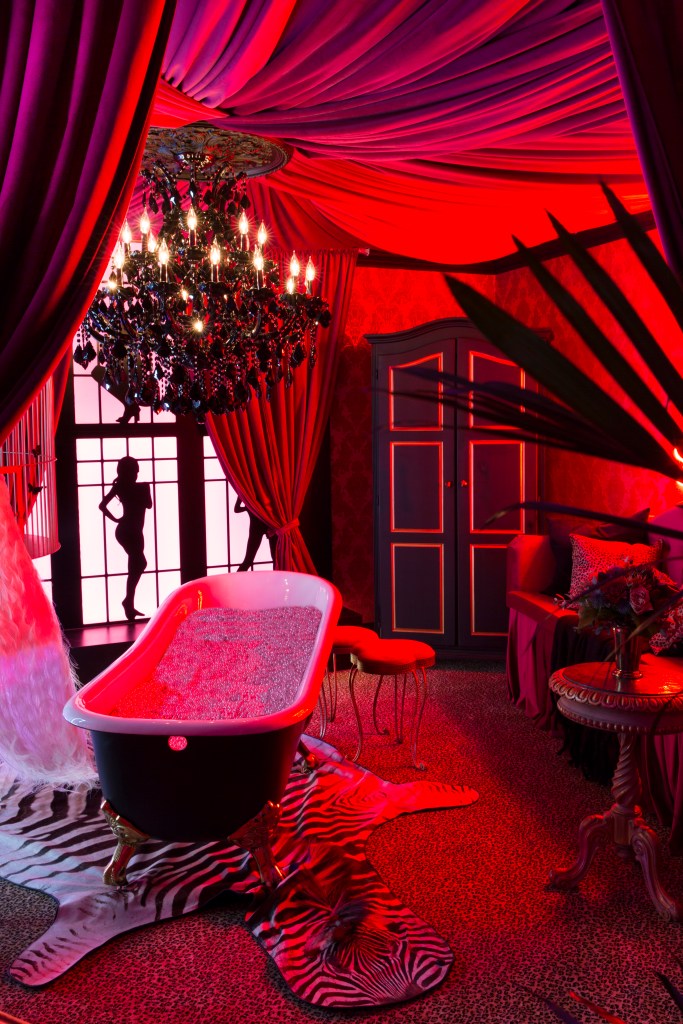 Moose Knuckles takes its Canadian heritage seriously. At the outerwear retailer’s first U.S. store, a 3,500-square-foot unit opening today at 57 Greene Street in Manhattan’s SoHo, a multilevel screen displays a live stream of the Northern Lights, hanging fixtures are suspended by leather-wrapped strips and another fixture is wrapped in deer fur, which also covers low seating.

A contraption called the Moose Goldberg — a play on the Rube Goldberg machine — is a two-story kinetic fixture featuring hockey sticks, a fishing hole, dart board, mountains and Tim Horton’s, Canada’s answer to McDonald’s. When an employee presses a button, a domino effect of motion begins, culminating in a Moose Knuckle jacket traveling from the lower level to the main floor.

Plastic car wash strips roped in gold line the walls, attesting to the brand’s sense of humor, while an intricate plaster element display a bird’s-eye view of glaciers from above. A grain wood tile floor is a link to the brand’s embrace of the great outdoors.

Moose Knuckles is a fashionable answer to another Canadian export, Canada Goose. Co-chief executive officer Noah Stern gave the competitor props, saying, “Most outerwear brands have a utilitarian heritage,” he said. We’re rooted in fashion. We love Canada Goose. They blazed a trail. They really allowed us to cross over [to fashion].”

The Moose Knuckles logo looms large in the collection, available in four metal finishes, including rubberized matte black and a gold collection rendered in 24-karat gold plate. The brand claims to be the only apparel firm authorized to use heavy-duty YKK anti-freeze luggage zippers on its coats and jackets.

For consumers who covet the Moose Knuckles logo, but didn’t have $1,000 to spend on a coat the brand introduced baseball caps, T-shirts, Polo shirts and hoodies, including the Her Girl Bunny, $324.

Moose Knuckles might be new to New York, but it has amassed a worldwide following. Stern pegged the brand’s annual global retail volume at $350 million to $450 million. “We’re very well financed and we’re expanding aggressively. We’re extremely profitable,” said Stern, adding that Moose Knuckles’s long term goals include opening 50 stores worldwide in cities such as London, Paris, Amsterdam, Tokyo, Beijing and Seoul, as well as one or two new locations and Canada and the U.S.

“We’re at a tipping point in all of those markets,” said Ayal Twik, co-ceo. “Korea was our first market outside Canada. All the celebrities — K-pop stars and soap opera stars — started to wear Moose Knuckles. “We’ve been growing at a rate of 60 percent to 70 percent per year for the last few years. Most down-filled jackets make you look like the Michelin Man. We’re rooted in fashion. Our styles are super-sexy and super-slimming.”

Stern, whose family has operated a coat business since 1921, said the design of Moose Knuckles products “took a lot of engineering.”

What sets Moose Knuckles apart besides the elevated fashion quotient of the coats and jackets, is the brand’s approach to the luxury market. “We’re a luxury premium brand that doesn’t take itself too seriously,” Stern said. “We just like to put out great coats and great content and have fun. We’re not exclusive or pretentious. Our approach to luxury is high and low, and that’s what the consumer wants.

“We’re a bit controversial,” Stern admitted. “Sometimes, we can be offensive.”

A VIP room is billed as “a sensual wonderland, a haven with red velvet walls, luxe fabrics and fine upholstery.” An old-fashioned claw bathtub in the center of the room is filled with pearls and Champagne bottles. “Everybody’s invited to the VIP room,” Stern said. “Not everyone’s going to like what we do.”

Some consumers will no doubt object to Moose Knuckles’ embrace of fur. Stern said brands are conflating the idea of sustainability by using faux fur, which is knitted, then shaved down and rinsed. “Some brands say they have sustainable faux fur, but it’s not even close,” he said. “We have many options, both fur and non-fur. We’ve adjusted product development accordingly.”

“We couldn’t have chosen a better space for our first U.S. store,” Twick said. “This city embodies what Moose Knuckles is about. It’s raw, it’s real and one-of-a-kind.”