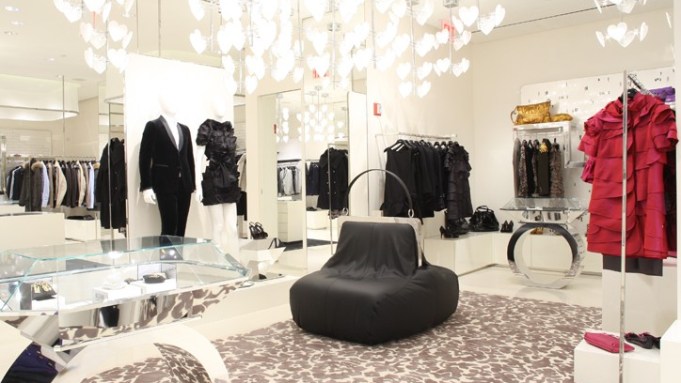 NEW YORK – Irony may be overrated.

The late Italian designer Franco Moschino, who had a taste for humor, satire and trope, relished his role as fashion’s gleeful provocateur. Some of that bite is missing from the 2,500-square-foot Moschino flagship that bowed on Tuesday at 401 West 14th Street, in the Meatpacking District, although the store is not without wit.

The flagship is projected to do $5 million in first-year sales, said Michelle Stein, president of Aeffe USA.

“From my idea, the classic American woman has a tendency toward more classic, elegant and formal style,” said Rossella Jardini, the creative director who took over after Moschino died in 1994. “Babe Paley and Jackie Kennedy” are examples of quintessential American style icons. “There is a strictness and discipline in their dressing,” she said of women in the U.S. “For leisure they dress one way, for work another way and for cocktail, yet another way.”

“We want to underscore the sophisticated elegance of the brand,” said Thierry Andretta, Moschino’s chief executive officer, said in 2007, adding that the goal is to create an even more “refined” product.

The first hint that Moschino is still a little off center is the alien residing in the flagship window. Inside, the store is meant to evoke an enchanted forest. While some of the elements scream “witty” — such as the black taffeta change purse-shaped setee with black handle and silver clasp — others are so muted, a magnifying glass and some perspective may be needed to discern them.

Tiny female figures painted on a white wall in an area housing Signature, formerly known as Moschino Couture, look like unrecognizable symbols from afar. Consumers may have a hard time seeing the forest for the trees on a wall covered in a grid of clear circles and silver circles that form a delicate tree pattern, without taking a few steps back. Stainless steel and frosted glass shelves representing branches display shoes, boots and handbags, red slipper chairs covered with stuffed felt hearts are seen throughout the store and display cases for jewelry and watches look like giant diamond rings.

Moschino Love for men and women, which was previously called Moschino Jeans, is in the back of the space. “It’s evolved into more of a lifestyle brand,” said Stein, adding that Love is priced 30 percent below Cheap & Chic, which is priced 30 percent below Signature. A Love black sleeveless sequin dress is $740 and a black taffeta dress with patent leather heart-shaped belt is $595. Moschino was known as a master of tromp d’oeil and Jardini has carried the torch with items such as a sleeveless black sheath with pearl beads sewn on to look like strands of pearls. Purple flats are emblazoned with Love on red toes and a beige handbag has the word Love scrawled in red and purple.

In the Signature area at the center of the store, a purple-dyed mink for $23,000 is a showstopper. Another unique item is a blue military jacket, $3,300, decorated with enamel pins of sailors and dames, patches of the Good Ship Lollypop and silly pirates, and a seahorse dangling from a gold cord tied to a centipede-shaped epaulet. “When it’s special and really elicits emotion in the customer it will move pretty quickly,” Stein said. “There’s lots of basics, like high-waisted tulip skirts and black sheath dresses with rose details [$1,280]. The more whimsical items are the frosting on the cake. We’ll buy only a few of the very unique pieces and as many as 24 of the tulip skirt.”

Cheap & Chic, at the front of the store, features a black dress with a bow detail at the neck is $695 and gray wool jacket with green grosgrain ribbon piping and three different silver buttons, $995. The happiest, most satirical styles seem to be missing from the line. A somber red felt jacket is handpainted with a bold black flower form. However, Elvis impersonators might like the red metallic jacket. A gray coat with black spots looks like a pelt pattern Cruella De Ville could have invented.

The Moschino flagship is a long way from its former home on Madison Avenue. “New York seems to be in a constant state of flux,” said Jardini. “Madison Avenue seems to have morphed into a shopping street for jewelers. There seems to be a movement toward downtown. This area was empty and seems to have morphed into an important shopping area. It was important for Moschino to seek out a lively new spot for a store.”