The unit features a new concept that includes quickly-turning merchandise.

Inside the Moschino store.

Just like any peacock, Moschino wants more attention, so it’s strutting its stuff on Madison Avenue in Manhattan.

Gabriele Maggio, Moschino’s general manager, called the Madison Avenue store a test, adding, “depending on the results at the end of this year, we’ll understand whether there’s the potential for a permanent location. We started to talk about temporary stores and pop-up shops a year ago. We have pop-up shops in Macau and Paris at Printemps du Louvre.”

Maggio didn’t rule out the possibility of another permanent Moschino store in New York City. “It’s temporary, but it’s a long temporary,” he said. “It’s a year and a half, and then we’ll see. The strategy we’ve [undertaken] is to make a lot of improvements to the organization’s visibility and the content of Moschino. We improved digital communications and fashion shows and we needed to improve the visibility of the physical stores.

“We want to create more animation and excitement with some special presentations,” Maggio added. “We got the inspiration and feeling about temporary stores and pop-up shops. This is the first temporary location in the U.S. We’re looking at the possibilities for the U.S. It’s still a desire. In some areas, such as L.A., we’re looking at some temporary stores. The nice part of doing this job with Jeremy is that he thinks of a different [store design] based on the area, which is fun and exciting. 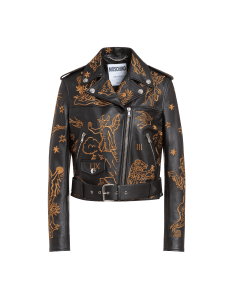 A leather jacket from Moschino’s fall 2019 collection is one of the standout items at the store.

“We need the customer to come and enjoy the experience of Moschino in a more visible location,” Maggio said. “We looked for a location uptown. I don’t think Moschino is the right match for Fifth Avenue. Madison Avenue between 58th Street and 60th Street is fashionable. Celine opened right across from us [at 650 Madison], and Balenciaga will open soon [at 620]. The corner will have a high-energy vibe.”

The new store features eight floor-to-ceiling windows, each filled with one letter of the brand’s name. The letters, which change colors, are a tribute to New York City’s ever-changing skyline and the colored lighting of skyscrapers. Another nod to the city: floating light installations of glass neon signs hanging from the ceiling using the brand’s lettering. Reinforcing the brand’s playful identity, a life-size Moschino teddy bear anchors the store.

“We’re evaluating whether to expand the selling area into the basement,” Maggio said. “We want to put special items and iconic items in the store. It’s a selected assortment that’s completely different from any other store in the world. There’s a smaller number of different items, but the quantity is deeper.

“We want to have a more frequent rotation of items,” he said. “Men’s wear is booming, shoes are crazy, and kids is an unbelievable success. We could [merchandise the store] as a week of kids or a week of men’s. Day by day or week by week, we’ll change the assortment. The products will be refreshed more frequently.” 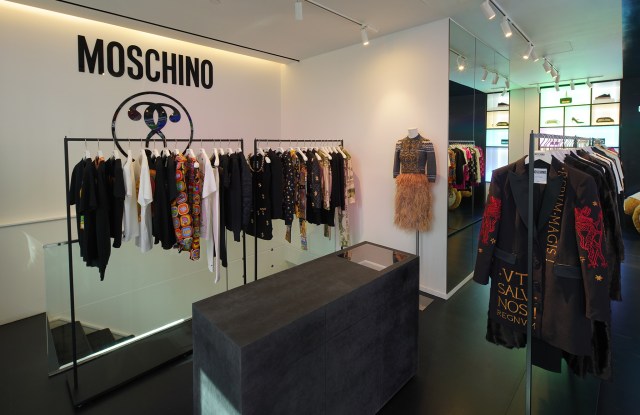 Inside the Moschino store.  George Chinsee/WWD

Classic items such as neon Moschino Teddy sneakers and a Moschino biker bag are on prominent display. Standout ready-to-wear pieces from the women’s pre-fall 2019 and men’s fall 2019 Rome collections are presented in the center of the store, while accessories are merchandised in the Moschino lettering window light displays, which double as shelving. The light show makes for the type of interactive experience for which the brand is known.

Maggio is looking forward to learning more about consumers who shop on Madison Avenue. “I expect that when you have stable businesses in both locations, each store will have its own demographics,” he said, also referring to the SoHo store. “Being in a new location, that’s a high-traffic location with top luxury brands and their top-performing stores is a new experience for us. What we want to do is really create a buzz and a sensibility in a premium location.”

Declining to give a volume projection, Maggio said, “We made a very safe forecast. But, that’s not the priority. The goal is to make the customer have some fun with Moschino.” The store will make a push for categories such as eyewear and shoes, which are growing. “We could announce a limited edition collection for the store in September. We also have some capsules that are seasonless, which we could launch whenever we feel,” he said. 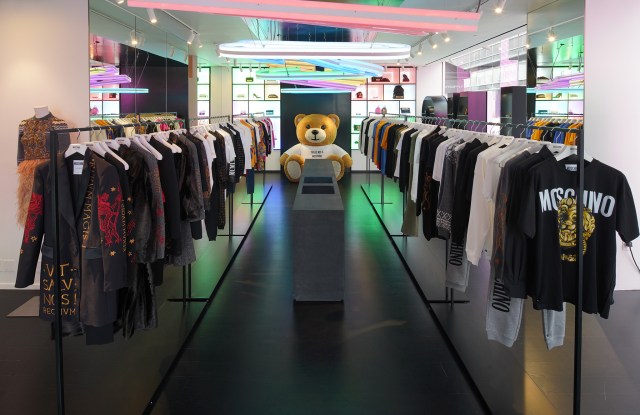 Inside the Moschino store.  George Chinsee/WWD