NEW YORK — It's easy to get carried away imagining a year-round resort lifestyle. Motu Tane, a collection started by beauty guru Francois Nars and fashion designer Sophie Theallet, aims to make that dream a reality, even if just a fashion... 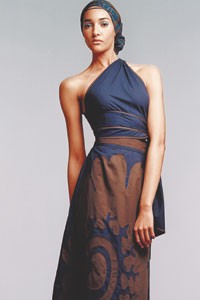 NEW YORK — It’s easy to get carried away imagining a year-round resort lifestyle. Motu Tane, a collection started by beauty guru Francois Nars and fashion designer Sophie Theallet, aims to make that dream a reality, even if just a fashion one.

Motu Tane, which launches at retail in mid-October, offers lightweight and floaty looks that would work equally well for a night out in New York or a Caribbean beach. Motu Tane takes an unusual approach: rather than offer seasonal collections, the duo has decided to concentrate on resort and will offer it year-round.

“The idea of doing resort exclusively offered a pretty wide range of possibilities,” Nars said. “People travel all year round, so it’s not just limited to winter. The collection will be sold the entire year.”

Nars came up with the concept in Tahiti, where he spends a lot of time each year.

“I am working on a book on Tahiti, so I was really frustrated with the fact that I couldn’t find any great fabrics to photograph,” Nars recalled. “I called Sophie and asked her if she could remake some vintage prints. She re-created the prints … and that’s when we started talking about creating a collection and a lifestyle only for resort.”

Theallet, who holds the title of chief creative officer, worked with Azzedine Alaia for 10 years and with Jean Paul Gaultier for three years before teaming up with Nars Cosmetics, for which she designed cosmetics bags, uniforms and T-shirts.

Nars also recruited Jennifer Lister, who left her post as chief executive officer of Nars Cosmetics Inc. for the project, which has no relation to the cosmetics firm. Nars sold his cosmetics company to Shiseido in 2000.

“When Sophie and Francois had this brilliant idea to create a new brand, I couldn’t imagine a better move,” said Lister, who serves as Motu Tane’s president and ceo.

French native Theallet takes an artisanal approach to her design, experimenting with color combinations, hand-dying original fabrics in her kitchen and applying Ti Fai Fai, a Polynesian patchwork technique traditionally used for bed linens. “I try to mix the artisanal feeling of the island with what I learned in couture,” she said.

The line targets upscale department stores and specialty boutiques, with wholesale prices such as $45 for a scarf, $127 for light cotton shorts and $1,800 for a ruffled crinkle chiffon and silk wrap dress.

Lister said by the end of this year, the company is targeting to be in about 35 doors as well as wholesale volume of up to $700,000.

As for the future, Nars and Theallet both hope to expand the resort concept into other categories.

For now, the next extension is a denim collection, which should be ready by spring 2006, Nars said. “Sophie and I love the idea of mixing the silk tops with jeans,” he said.