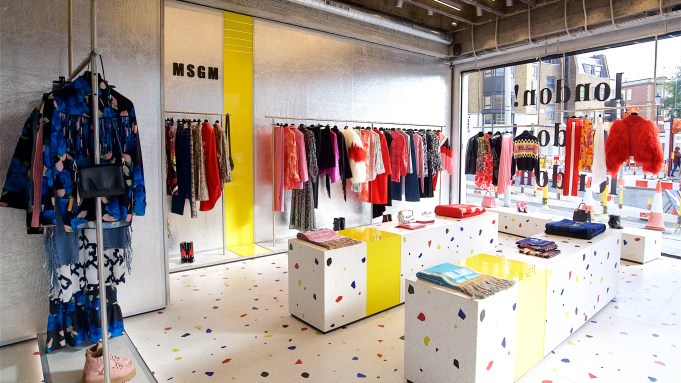 LONDON — Italian contemporary and street brand MSGM has opened the doors to its first London store, and its first European location outside Italy.

The brand has always found an audience in London and was embraced by British retailers from the get-go leading creative director Massimo Giorgetti to experiment with new retail concepts and new audiences.

“The U.K. was the first market that loved MSGM from the very beginning. Harvey Nichols bought the first collection and Selfridges, Browns, Matchesfashion.com and Liberty London followed,” Giorgetti said in an interview.

“Now we are here and this is the only space where you can also see the full men’s collection in its own space and understand that it’s not just about the sweatshirts and the T-shirts. It’s also the first time we are opening in a different type of area. All our other stores are located in very young areas like Brera in Milan, but this is a little less young, a little posher, which I like.”

The store, formerly occupied by Chanel, is located at the corner of Brompton Road in Brompton Cross, which has been getting a revamp as of late and attracting new residents such as Sophia Webster, Geraldina and Golden Goose. MSGM adds a new energy and mixes well with the area’s locals, including Stella McCartney, Joseph and Chanel, which has unveiled a new, bigger space nearby.

The MSGM space spans two floors and 1,991 square feet, with the men’s wear collection — a growing business for the brand — having its own dedicated space for the first time on the lower ground floor. Women’s wear is located on the ground floor, with long rails of the brand’s fall 2018 collection dressing the windows and adding a colorful, upbeat tone to the street.

“It’s like the store is making its presence felt on the street, but the street is also coming into the store. It’s an MSGM rule,” the designer added.

This was also the first time Giorgetti took over the design process for the store’s interiors and his vision was to create a concept that was quintessentially Italian but also incorporated a punchy, underground feel that’s representative both of London and his label.

He added Italian flair with Venetian terrazzo flooring with splashes of primary colors all over and a set of bright, modernist chairs and sofas designed by Studio B.B.P.R and Osvaldo Borsani, respectively.

Elsewhere, the ceiling has been kept unpolished with exposed pipes and the walls are covered with aluminum or semi-reflective steel.

“If you come to my house in Milan, you’ll see that the floor might be different, but the furniture, the colors the touch of gray is very me and very much like the brand. It’s a balance between Italian and underground, romantic and streetwear, feminine and masculine,” Giorgetti said.

He added that he wants to use the space to display different art installations and the works of young artists. For the opening, he worked with the Japanese plant artist Satoshi Kawamoto, who created an installation using dehydrated plants.

Being part of the neighborhood, at the crossroads of Chelsea and South Kensington, also offers an opportunity to start showing the brand in a new light, putting more focus on its ready-to-wear ranges and moving beyond its signature sweatshirts and logo T-shirts, which have been best-sellers since launch.

“It’s been four days since the store is open and we’ve been selling a lot of ready-to-wear and fewer T-shirts, denim and sweaters, which we are very happy about,” the designer said. “In the past we sold a lot of streetwear items but I really hope that with this new concept we can start a new era, a new beginning for MSGM. I think it’s the right moment.”

There has also been increasing attention towards the brands cool cross-body bags and chunky tractor boots in store, so Giorgetti, who is getting ready to celebrate his brand’s 10th anniversary next year, is planning to develop the accessories category further.

Retail will also remain a focus for the brand, which operates 30 stores across Japan, China and Italy.

“In the last five to 10 years, everyone did a lot of shopping online, but now there is a new desire to touch and to come back into the store,” said Giorgetti, who is already on the lookout for a new, bigger location in his hometown in Milan.

“Buying on the Internet used to be a form of newness, but now for the young generation, newness might be to touch the clothes. Fashion is really about what’s happening around you, you have to be one step ahead and catch it in time.”