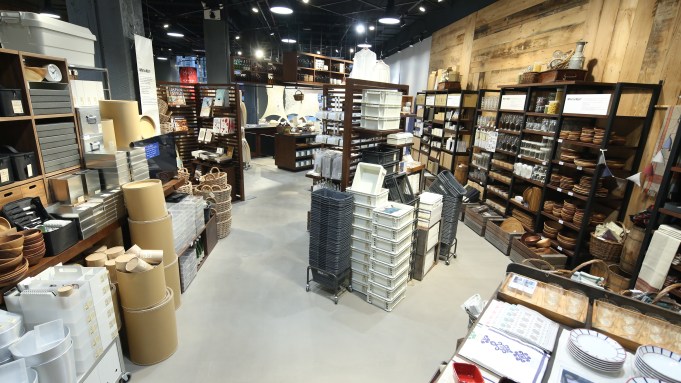 NEW YORK — With Friday’s opening of its North American flagship here, Muji is going all-out on the experiential side.

Located across the street from the New York Public Library, store at 475 Fifth Avenue is another study of how traditional retail is changing. The first floor of the nearly 12,000-square foot space houses an Aroma Lab for shoppers to create a customized scent. Nearby, the Found Muji area showcases favorite well-designed everyday objects culled by Muji designers and creative directors from their far-flung travels. Spain’s Basque region is the focus of the inaugural collection in New York where selections include delicate drinking glasses popular in San Sebastián.

Unlike Muji’s West 40th Street store in the Santiago Calatrava-designed New York Times building, the flagship has an embroidery machine station where shoppers can customize any of their textile purchases – clothing, accessories, napkins and other home decor – with any of 300 motifs, which include such New York-centric selections as a taxi cab, the Statue of Liberty, a hamburger and dinosaur bones (a wink at the American Museum of Natural History). More conservative types will lean toward traditional monogramming, which can also be done on-the-spot for $3 a letter.

The new store has the largest apparel selection of any of the 11 U.S. stores, the first of which opened in 2007. The company has more than 700 worldwide, selling more than 7,000 products. To welcome New York shoppers to the Fifth Avenue outpost, a large black-and-white mural of the city’s skyline as seen through a glass of water that is more than half full is meant to send a pointed message of optimism, according to Asako Shimazaki, president of Muji USA.

Another launch is children’s wear, which is geared for youngsters between the ages of 2 and 10, and also features New York-focused accents like T-shirts printed with squirrels.

The Fifth Avenue store is also the only one in the U.S. with an assortment of books about Japanese lifestyle, culture, design and cooking such as Azby Brown’s “The Very Small Home: Japanese Ideas for Living Well in Limited Space,” Nancy Singleton Hachisu’s “Japanese Farm Food.” Leonard Koren’ “Wabi-Sabi for Artists, Designers, Poets & Philosophers.” The store’s travel section, which sells brightly colored suitcases designed by Naoto Fukasawa, also has New York travel books. Pillowy neck rests, which can be used for ailing backs, are a bestseller in the company’s store in Terminal 5 at John F. Kennedy International Airport.

Through a partnership with Green Fingers New York, a Rivington Street operation, Muji is selling plants in the new location – another first for the company. “The whole purpose of this store is to show that Muji is not just products. We want to use these services to show our message to customers. We have everything — apparel, food, household items, furniture, skin care,” Shimazaki said.

Organic knitwear and no-itch turtlenecks — organic wool bodies with non-scratchy cotton turtlenecks — are being launched. Collarless wool coats at $200, lightweight down vests at $80, button-down shirts at $39, and flannel shirts and dresses at $40 are among the women’s offerings. Practicality runs throughout all categories, as evidenced by the LED Portable Light, which can be hooked on a doorknob, and a multitude of storage containers.

Shoppers can take a break on the main floor at a Café Grumpy-run coffee bar. While not stocked like some Muji stores in Japan, which have grocery stores within them, the new Midtown space’s lower level offers a $5 instant green tea latte mix and $4.50 bags of chocolate marshmallows, among other snacks.

Founded in 1980, Muji, a $2.1 billion brand, is rooted in manufacturing simple, low-cost, good-quality products. To that end, the design team remains in-house and based in Japan. There are no plans to create a New York-based team, even though apparel sales are expected to amount to 40 percent of the total. The company is considering opening its next store in New Jersey next year, and Shimazaki said she is always looking in Boston for a site.

Product designer Fukasawa has helped the retailer create storage walls and other space-saving items since 2002 and is a believer in its Compact Life concept, which was started when the Japanese economy had grown rapidly and people were enjoying material wealth. At that time the concept was meant to show a return to Japan’s origins, but now it “accurately captures the direction in which today’s society is moving,” according to Fukasawa.