The Tokyo-based global retailer is confident its atypical assortment will play well across America.

Muji is ready to spread its clean Asian aesthetic, multifarious merchandising and moderate prices across America.

“We are targeting to open more than 100 stores in the U.S. by 2025,” Toru Akita, chief operating officer of Muji North America, told WWD. “We want to open additional stores in New York, Los Angeles, San Francisco and Portland and we are looking for locations in Washington, D.C., Philadelphia, Chicago, Seattle, Austin and Miami.”

For the expansion, the Muji format is changing — dramatically. “Currently, our store size averages 8,000 square feet. We want to expand it to 20,000 to 25,000 square feet. That’s a big difference,” Akita said.

“There are a lot of items we can introduce to North America — mainly furniture and kids wear. And we also have our Muji Diner experience in Japan, Singapore, Hong Kong, [South] Korea and China. But we have been limited in the U.S. because of the size of the stores. We have a sister company named Idée. It is also a lifestyle company mainly providing furniture, though not yet in the U.S. That is a possibility, if we have the larger stores.” 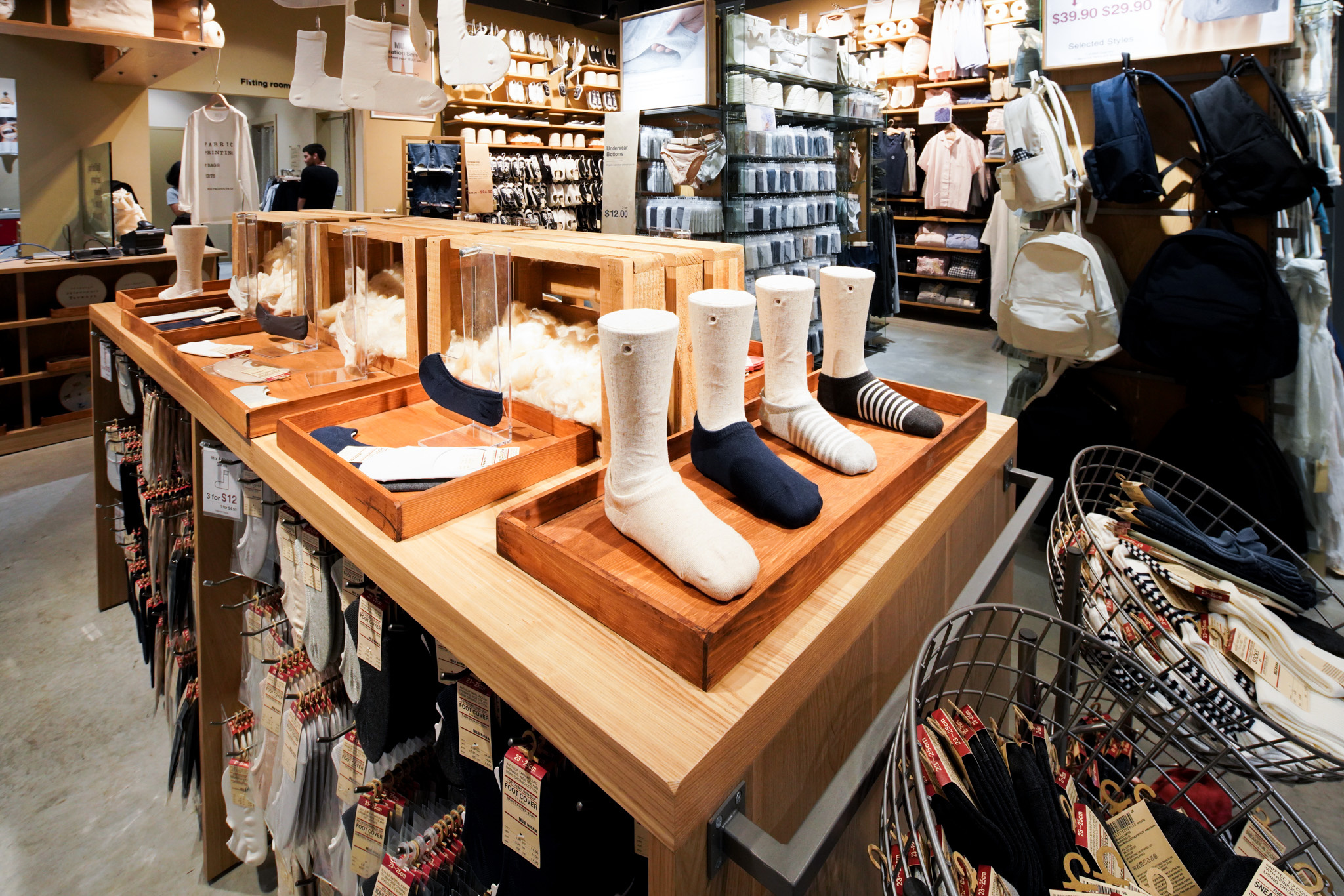 In addition, a Muji Hotel is planned for North America, as previously reported in WWD. There are three Muji Hotels — in Tokyo, Beijing and Shenzhen. “We will have a location on the West Coast in 2022 or 2023,” Akita said. “I can not tell you the location. It’s a secret for now.”

Akita, who has been in his current role for eight months, has an aggressive agenda, as well as the right experience to lead the North American subsidiary through a pivotal growth phase. Previously, he orchestrated Muji expansions into Canada, China, Indonesia and the Philippines.

“Over 90 percent of our business is generated in Asian countries. We are thinking that the U.S. has the most potential market for our Muji brand,” Akita said.

But Japanese retailers have a poor track record in America. Takashimaya, Mitsukoshi, Itokin and Isetan all came and went, and business at Uniqlo, Muji’s biggest competitor globally, has been tough in the U.S., outside of major urban areas.

Akita believes Muji has already transcended the experience of other Japanese retailers in the U.S. “The acceptance is good,” he said. “The reason we are different from other Japanese companies is that we already have stores in 29 countries,” that Americans have visited in their travels. “We are really very popular, mainly in Asian countries. Even in the North American market, there are already a lot of customers who know, who love, the Muji brand.”

There’s also a big difference in the offering. Unlike Uniqlo, Muji is far less reliant on the fickle fashion category. Muji sells everything from plants, stationery, refillable gel pens, mattresses and sheets, to skin care, cleaning systems, marshmallows, containers, cookies and curry, as well as men’s, women’s and kids wear, and sandals.

Still, Muji must familiarize more U.S. consumers with its brand and select communities where people are open-minded to new shopping experiences. Muji must also keep expansion and operating costs down so prices stay reasonable. It’s expansion strategy and confidence in brick and mortar comes at a time when many U.S. retailers are closing stores, and online shopping continues to grow.

Akita acknowledged that in the U.S. “we are not making a big profit because we are very aggressive to open new stores. Like-for-like stores are making a profit, but we are investing to build new stores. Our recent new store projects are all large formats, such as Portland and 59th Street. Future stores are going to be even larger. Some stores can make a profit within a year. The average is around 2.5 years.”

“Our total sales in the U.S. increased more than 150 percent from 2017 to 2018, due to store openings and growth at existing stores,” Akita said. “Last year, same-store sales in North America grew 8 percent.”

The 10,000-square-foot Hudson Yards store is Muji’s highest trafficked location, which isn’t surprising considering the West Side complex opened in March and is the biggest development in New York City since Rockefeller Center opened its first phase in 1933.

“We are very happy with the level of visits at Hudson Yards, especially with all the tourists,” Akita said. “There are a lot of people coming to the store who do not know the Muji brand. It’s their introduction to the brand.”

Muji’s e-commerce in the U.S. has a long way to go. “Our business is quite small representing less than 7 percent of the U.S. business,” Akita said. “Other brands have a much higher online sales share. We can be around 25 to 30 percent by 2025.”

Globally, Muji’s revenues continue to grow yet over the last five quarters operating profits have slipped, largely due to China, where locally made products have lacked sufficient quality, causing consumers to shop Muji stores less. Muji is beginning to have items selling in China produced elsewhere.

“China didn’t have strong new items before, but for the first quarter the Chinese market growth is healthy — much better than the last fourth quarter,” Akita said. “Also, we only have 256 stores in China. We don’t think it’s too much. We are targeting more and more stores in China,” including another 31 units through February 2020, bringing the total to 287. “China will be biggest market except for Japan,” where there are 441 stores and another 21 are being added through February 2020. 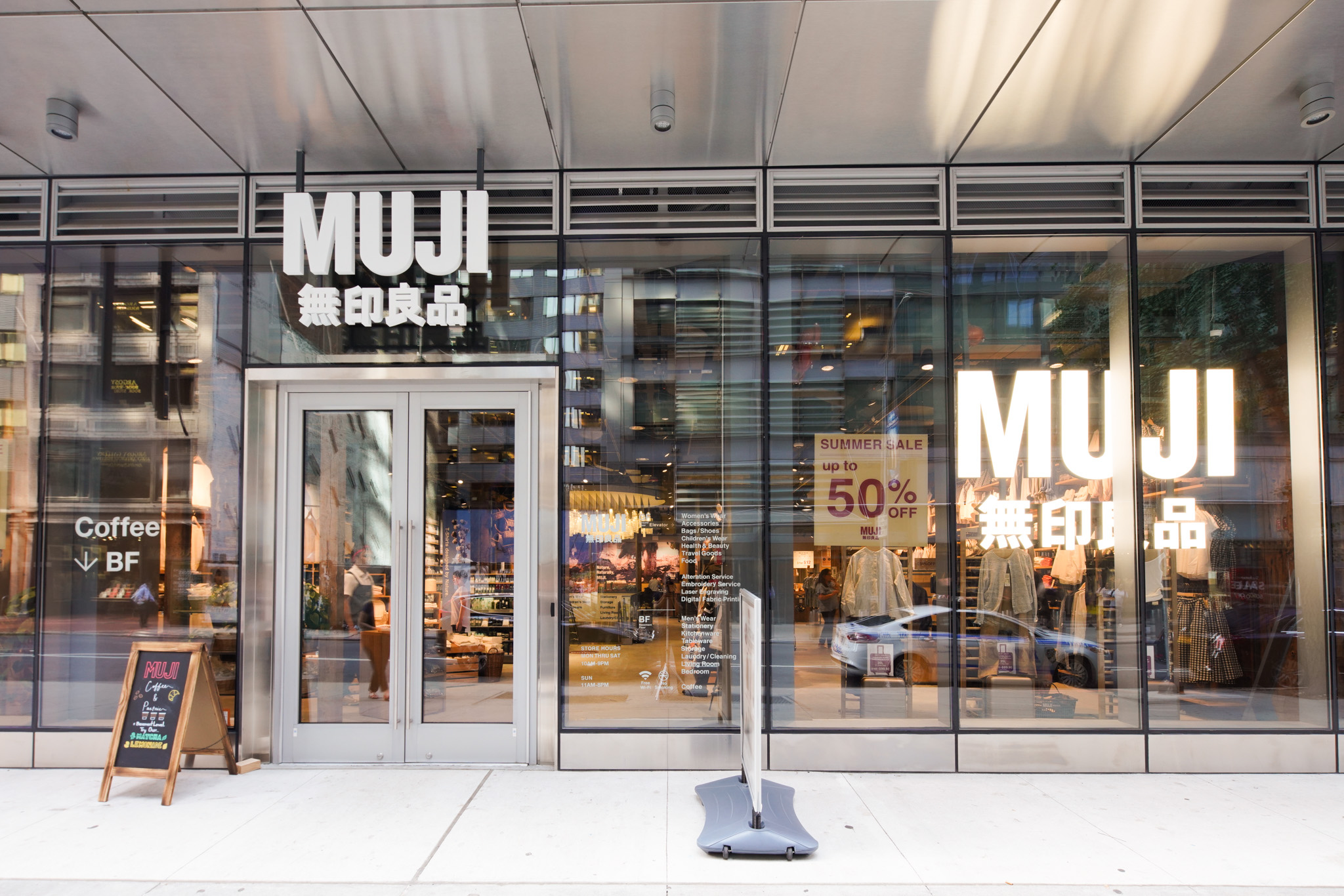 Touring Muji’s first store on Manhattan’s Upper East Side, which opened in early July on 59th Street  just off Lexington Avenue, Akita prompts a guest to notice the large chandelier. It’s a bit of an illusion. “When you look up close at it, you realize it’s made from Muji products, mostly our glasses and storage items.”

He’s highlighting unique features at the two-level, 13,000-square-foot store, among them, the embroidery counter to monogram and personalize a wide selection of Muji fabrics, from T-shirts, totes and other garments to household fabrics like bedding or towels.

Yet it’s more about consistency than differentiation. Door-to-door, Muji preserves an aura of simplicity and a soothing earth-tone fashion palette largely devoid of prints, strong color or embellishments. There’s an easy, organic flow from category to category, free of walls, which encourages browsing and impulse buying.

“Our basic design concept has not changed since 1983, when the first Muji store in Tokyo opened,” Akita said. “Stores are designed minimally, using natural materials such as stone and reclaimed ash wood, similar to how we design our products with natural materials.”

The front of each store is set with seasonal or holiday-themed tables. An all-white array of T-shirts, towels and slip-on sneakers, made from organic cotton, were featured. Deeper into the store, there’s the aroma bar with oils offering custom blends for diffusers, a bestseller, and the  “Muji Lab” where new designs and fabrics, with such traits as sweat resistance and stretch, are tested.

Luggage, another bestseller, is designed to roll smoothly and quietly and to enable stickers to be readily removed without leaving marks. Offered in three sizes starting at $160, the luggage sells at a rate of 60 to 80 pieces a week in the U.S., according to Akita.

The “right angle” socks are bestsellers, selling at a rate of 8,000 pairs a week in the U.S., on average. They’re shaped to fit the natural angle and contour of the heels and designed to fit snugly so there’s no uncomfortable bunching from excess fabric. The socks are priced at $4.90 a pair, or three for $12. The $29 organic cotton broadshirts, the first apparel product offered when the company launched in 1980 in Japan, are also popular.

“Our design is very simple. It easily blends into someone’s lifestyle,” Akita said.

Simplicity comes with discretion. The Muji logo does not appear on any garment, except in small print on care instruction labels. It’s a reflection of the brand’s “anti-brand” philosophy rooted in the name itself. Muji derives from the company’s original name Mujirushi Ryohin, meaning “no brand, quality goods.”

Muji was launched at a time when luxury brands such as Louis Vuitton and Chanel began their rapid growth in Japan and other Asian countries. The company started out as a small private line selling shiitake mushrooms and 40 other items in Seiyu supermarkets, and was spun off as a store in Japan. Mushrooms are no longer carried, though dried vegetables such as lotus root and garlic are sold.

Seeking to differentiate, Muji, as Akita said, was established as the “antithesis” of other brands where people paid up for the brand name.

“Being the ‘no brand,’ we want people to see the quality, value and function of the product, rather than the brand name,” Akita said. “Muji is quite a unique brand. One can not find a very similar business model anywhere in the world.”