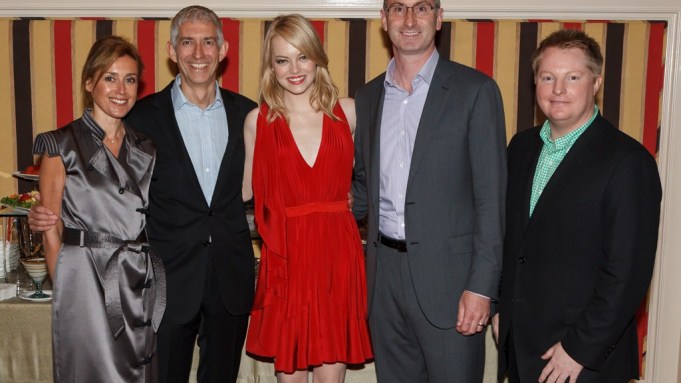 It may look like the good old days are back in the drugstore world, but a revolution is afoot.

That was the view from the National Association of Chain Drug Stores Annual Meeting in Palm Beach, Fla., last weekend. As manufacturers and retailers expressed a renewed confidence, it seemed like the halcyon days of past decades were alive again. But there’s a catch.

“This is not growth for the sake of growth — it is clever growth,” said Ido Leffler, co-founder of Yes To Inc., who chatted about the silver lining of surviving a severe recession. “These are happy days — happy, smart days.”

The point was more sharply made by WSL Strategic Retail founder Wendy Liebmann, who warned that the drugstore industry faces competition from a gathering digital juggernaut.

But such thoughts, like the rainy patch on Saturday, did little to dampen spirits of the more than 2,100 top manufacturer and retail executives who, for the most part, said business is brightening. The retro mood was heightened by former President George W. Bush, who told personal stories from his days in office. The country’s former top chief executive’s words reflected a buoyant mood. “You cannot lead without being optimistic,” he said in a rare public appearance. His advice to business leaders was “knowing what you don’t know and finding people who do know.”

At the close of each business day, the parties kicked off. They were more jovial and relaxed than in the past few years — with a nod to decades past thanks to performances by Chicago, Chris Isaak and The Moody Blues. L’Oréal’s “Mad Men”-themed party evoked memories of the days when many of the participating drug chains were formed. “We are definitely seeing positive reaction to our products and innovation,” confirmed L’Oréal Paris president Karen Fondu.

At Revlon Inc.’s annual Friday night fete, brand ambassador Emma Stone cited some of the reasons she was attracted to the firm: accessibility, quality product and its support of women’s charities, namely those taking on breast cancer. “I grew up surrounded by Revlon because it’s what my mom wore,” said Stone, who named Revlon blow dryers and foundations as childhood favorites.

Along with an ode to the past, the future was on the minds of cosmetics executives as they hammered out a road map to keep the drug channel competitive against a powerhouse competitor — online selling.

“Is the industry ready for the impact of digital?” asked Liebmann, who said the continuing shift towards cross-category online buying presents an interesting conundrum for drugstores looking to increase beauty sales. Much like consumers’ buying patterns for books, music and movies, shoppers are moving more and more to the Web for their drugstore purchases and seem to be gravitating toward big-box e-tailers like Amazon.com rather than to proprietary drugstore Web sites.

“[Beauty] retailers have to realize they are competing with Amazon every day,” declared Candace Corlett, president of WSL Strategic Retail.

Liebmann and Corlett cited a recent Pulse study, which showed that some of the biggest categories consumers are procuring through the Web include electronics, baby and luxury. Those dubbed “next to climb” include beauty, specifically cosmetics, skin and hair care, men’s grooming and lip care. Commodities like oral care, cleaning products and paper goods are still purchased primarily in brick-and-mortar outlets — for now.

“Categories shifting online faster are generally those where it is easier to browse an exhausting selection from your couch rather than traveling from store to store,” according to the report. “As [sites like] Diapers.com grow, retailers across channels are left wondering where their baby business went.”

In order to drive in-store purchasing, Liebmann said drugstores must up the ante when it comes to providing customer service and an overall shopping experience. For new launches, she said revamping promotional strategies and injecting sampling initiatives are critical in order to stay in the game.

Procter & Gamble Co. is targeting the tech-savvy beauty consumer with a series of initiatives that make it easier to purchase and become aware of its cross-category product offerings. From displaying QR codes on its packaging and advertisements to offering a tear-jerking “Thank You Mom” YouTube commercial for the 2012 London Olympics — which, claimed P&G, became the number-one online advertisement in the world after just two days — the company is focused on extending its viral reach.

John Burgfechtel, vice president of sales, customer marketing and sales operations for Coty Beauty, agreed that everything is for sale via the Web for all front-end business. To keep shoppers wanting to visit brick-and-mortar stores, Coty is working with retailers to provide digital assets that create an environment of education and brand interaction. “Testers, imagery and assortment play a large role in success,” he said. “Getting fragrance shoppers in the door is crucial.” The firm would not comment on its ongoing battle to acquire Avon Products Inc.

With the added realization that the complexion of America is changing, companies also unveiled ramped-up plans to reach ethnic consumers, namely Latino women. Even Burt’s Bees, known for its natural positioning, has expanded its reach to “round out the portfolio” to Hispanic consumers, with new lip shades designed to flatter darker complexions. Walgreen Co.’s president of daily living products and solutions, Joe Magnacca — clearly a man in demand at the meeting — said the newest Walgreens store would bow in Puerto Rico next week, with a design and merchandise assortment aimed to please the local market. It is the latest to feature a Look Boutique, a concept first introduced almost three years ago in Duane Reade. Elements from the Look Boutique are used strategically at Duane Reade and Walgreens stores — the last major debut was in January in Chicago. Elements to be included in Puerto Rico include features first introduced at the 40 Wall Street flagship in New York, like nail services, a blown out fragrance selection (the existing Puerto Rico stores are among the best sellers of scents in the entire chain) and dermatological skin care consultations. There are currently 112 Walgreens stores on the island.

“Puerto Rico is a major market for us,” said Bill George, president and chief operating officer of Markwins International, who added that wallet-friendly beauty brand Wet ‘n’ Wild will be on offer in the new Walgreens outpost. The brand’s newest spokeswoman — Fergie of the Black Eyed Peas — is fronting its advertising, both in store and online, helping to boost the brand’s Web presence (she has more than six million Facebook fans) and to continue to attract the beauty-obsessed Latina consumer.

“We have new products that speak to the consumers,” said George, who added that the brand performs exceptionally within dense urban and ethnically diverse areas. “We are showing double-digit growth over the last six months.” The quest for value encouraged Markwins to do its first-ever coupon, which will debut in May.

Those in attendance also discussed how beauty purveyors are looking to expand in other doors, including efforts by warehouses, such as Sam’s, to venture back into beauty. Former CVS executive Mike Bloom, now president of Family Dollar Stores Inc., revealed plans to open 500 more stores and extend much deeper into beauty. Several beauty firms confirmed they are looking for ways to serve the value store trade channel without cannibalizing traditional sales.

“Don’t overlook men” was also a battle cry — even from male executives. “Men’s grooming is a great opportunity,” said Steven Anderson, president and chief executive officer of NACDS. Mark Griffin, chairman of Lewis Drug, agreed, “I want to see more products out there for men. It is time for more men’s grooming options.”

Griffin was among several retailers who said they are tinkering with the ambiance of stores. An upscale cosmetics prototype is being unveiled in store resets this summer in other stores after a successful test, Griffin said. Barbara Zamudio, vice president of mass merchandising and pricing for Ulta, said the chain continues to prosper from new lines and enhanced store design, including brand boutiques.

• NACDS chairman and chief administrative officer of H-E-B, Bob Loeffler, handed off the gavel to Greg Wasson, president and chief executive officer of Walgreen Co., who discussed the importance of “[phasing] out terminology such as front end and back end and [beginning] to think about the total store” in meeting the needs of shoppers.
• Love & Toast was represented for the first time ever at NACDS, hoping to tap into retailer demand for brands to distinguish from the competition.
• Among the themes that have inspired new products from Physicians Formula Holdings Inc. ceo Ingrid Jackel were the consumer’s increasing desire for calm and privacy, neurocosmetics and do-it-yourself dermatology.
• NACDS recognized two industry icons at the close of the meeting: Andrew Giancamilli, the former ceo of Rexall Pharma Plus and past chairman of NACDS, received the Sheldon W. Fantle Lifetime Achievement Award, and M. Jerome Brown, former vice president for industry and customer development of Unilever, received the Robert B. Begley Award.
• Come May, Conair will introduce a men’s 2-Blade Trimming System and an implement designed to keep stubble looking tidy.
• Burt’s Bees will add an antiaging face care line for dry skin called Ultimate Care in January.
• According to chatter, Lumene and Physicians Formula will introduce BB creams in the near future.
• Kiss is adding a gel at-home product called Kiss Ever-Lasting that comes with an LED light to “set” the gels and is slated for a January  rollout.
• Sinful Colors’ general manager, Paul Murphy, said the firm is focusing on targeted trend color collections.
• Is gray the new blonde? Several hair experts touted the beauty of going gray gracefully and the opportunities to launch hair color products to accent gray.