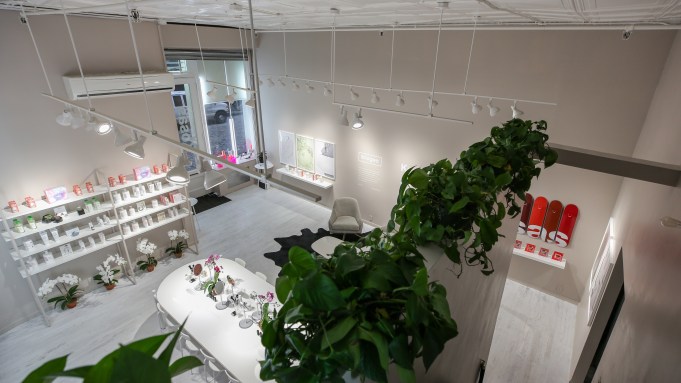 The downward trajectory of Manhattan retail real estate, with average asking rents declining in 15 out of 17 major corridors in fall of 2018, produced more than lots of empty storefronts. The availability of retail space at asking rents discounted as much as 36 percent from fall 2017 levels spawned a cottage industry of hybrid retail brokers/store operators/consultants, offering soup-to-nuts services from design to staffing for direct-to-consumer brands. While larger firms such as Appear Here have been providing similar services, the twist is that upstarts are getting into the game.

The Naked Retail Group — a partnership between Justin Kerzner, creator of Upton Belts; Bruce Gifford, founder of Naked Cashmere, and Brandon Charnas, cofounder of Current Real Estate Advisors and the husband of Something Navy’s Arielle Charnas — is an example of the new business model, leasing short-term space to digitally native brands. The company, which now operates six stores, plans to open another six to 10 this year.

“We talk to a brand, find out their needs and give them a price for the build-out, sales help and point of sale,” Gifford said. Added Kerzner, “We always ask a partnership fee upfront that’s all-inclusive and allows them to take their full sales themselves.”

Upton Belts at 224 Mulberry Street is a “constantly evolving collaborative space, featuring other cool brands,” the web site said. “Like you, we love a good outfit change. So we mix things up and get a new look, with new brands, every few weeks.”

Naked Retail Group works with large and small retailers. “We help new brands learn the business,” Gifford said. “For example, the Japanese shoe brand They. Our brand [Naked Cashmere] is big and juicy enough to do enough business to support other brands.”

In addition to storefronts at 43 Mulberry Street, 224 Mulberry Street, 85 Mercer Street and 119 Spring Street in New York’s SoHo, “We’re in the process of taking a space on South Crosby at Howard Street, opening in the Flatiron District in May and in the fall we plan to open units on the Upper East Side,” Kerzner said. “We’re also opening a new Rhone store in Times Square.”

Kerzner, whose Upton Belts opened online two-and-a-half years ago, decided to open a physical location on West Broadway. As he built out the space, he saw a way to collaborate with other fashion and lifestyle brands and build out their retail experiences while capitalizing on this in-store experience.

“It was meant to be more than our own brand,” Kerzner said. “The idea was that we’d design the space for other brands, staff it and share in the marketing. That way it would make our store more impactful. In the first few months, we had 20 brands, usually one at a time. We’d rebuild the store every three to five days.”

Gifford’s Naked Cashmere label was a client of Kerzner’s at Upton’s store on West Broadway. When Kerzner decided to move to a space on Mulberry Street, Naked Cashmere followed, and started doing consistent pop-ups. “They would do some pretty serious business,” Kerzner said. “We did $100,000,” added Gifford, “I started to notice all this empty retail space.”

That’s when the two men came up with the idea for Naked Retail Group. Charnas was introduced to Gifford by his son. While the Something Navy apparel collection is sold exclusively at Nordstrom, the Naked Retail Group has opened stores for a beauty brand in which Brandon and Arielle Charnas have invested, Kosas and Briogeo, a hair-care line touted by Charnas, and Brooklinen, which also got a shout-out from the Something Navy influencer.

Kerzner learned from experience that Naked Retail Group stores should accommodate two to six brands, but no more. “What we’re noticing at retailers like Bulletin, Story, Flying Solo and Dreams on Air is that a lot of brands are going into the stores and the message starts to get lost because they have too many brands,” he said.

Naked Retail Group is opportunistic. “One week, we moved all the brands out of Crosby Street,” Gifford said. “An audio headphone company paid us a fortune to hold an event there. That’s how flexible we can be.”