The new retail concept offers fast service for those in a rush, but the brand hopes consumers with the luxury of time will stay and learn about products, as if they were lingering over a good book.

Don’t expect to borrow a book at Tod’s Library, the 1,600-square-foot inaugural example of a new retail concept that bowed on Thursday at The Shops and Restaurants at Hudson Yards. It’s just one of the Italian leather brand’s retail innovations, following last year’s Sloane Apartment in London, designed by star interior decorator India Mahdavi. Another new idea will be brought to life this summer, and Tod’s is already planning to open a third store in Manhattan.

“In Milan, there will be the new big concept and big experience for shops opening in mid-June. It will be a good surprise,” Diego Della Valle, chief executive officer and president of Tod’s Group, said at the library’s opening celebration for press and VIPs, declining to divulge any further details.

Della Valle revealed that Tod’s, which operates a boutique on Madison Avenue, wants to open another store in Manhattan. “Now we want to decide between the Meatpacking District, SoHo and the Village,” he said. “We don’t know where yet, but we want to be downtown.”

Tod’s has been evolving its retail strategy and other aspects of its business. Tod’s SpA in the first quarter ended March reported revenues of 216.4 million euros, down 4.3 percent versus the same period last year. At constant exchange rates, revenues would have declined 5.7 percent.

The focal point of the space is a soaring bookshelf with a rolling library ladder that showcases a library of tools traditionally used in the production of leather goods, as well as an assortment of Vachetta leathers from which customers can choose to customize Gommino moccasins and other signature styles of the brand.

Della Valle said Tod’s Library was designed for the digital age with products displayed for consumers who are looking to digital media to inform their purchases, but aren’t ready to  give up “the experience of elegance and quality.”

“It’s possible to see and buy very quickly in the environment of Tod’s Library, with our DNA,” Della Valle added. “It’s the perfect mix of a new generation of shops with the omnichannel idea. At the same time, we want to give [customers] a charming atmosphere.” 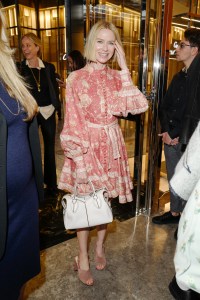 Della Valle said Sloane Apartment was designed to appeal to women slightly more than men, while Tod’s Library is the opposite. “The focus is a little more on men,” he said, raising his arm with a sweeping gesture toward the bookshelf. “In many parts of the world it’s possible to do a shop for men and a shop for women.

“I want to be honest,” Della Valle continued. “Tonight, I think it went perfectly for women. Tonight, I see it’s OK for women, too,” he said of guests such as Anh Duong, Naomi Watts, Jamie Tisch, Dorian Grinspan, RJ King and Richard Gere. 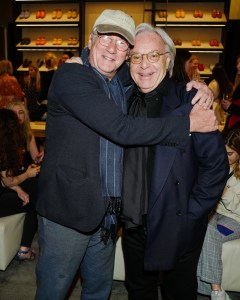 “E-commerce is growing fast and well,” Della Valle said. “I’m a big supporter of e-commerce. The store is important to the mix. Between the store and e-commerce, it’s a good service and e-commerce is a dream, image. We sell high-quality, Italian products.

“For us, it’s an experiment,” Della Valle said of the Library. “Hudson Yards is a new place in town. We have a shop on Madison Avenue. This is a high visibility location. I was here two months ago. Now I was in Asia. The people there know about Hudson Yards. It’s good marketing.”

While Tod’s Library was designed to facilitate fast transactions for busy Millennial shoppers, Della Valle hopes the open-design, bookish backstory is conducive to lingering and learning about the brand’s colorful history. “It’s a time for people and friends,” he said. “You come into our house….Our customers, we consider our good friends.”