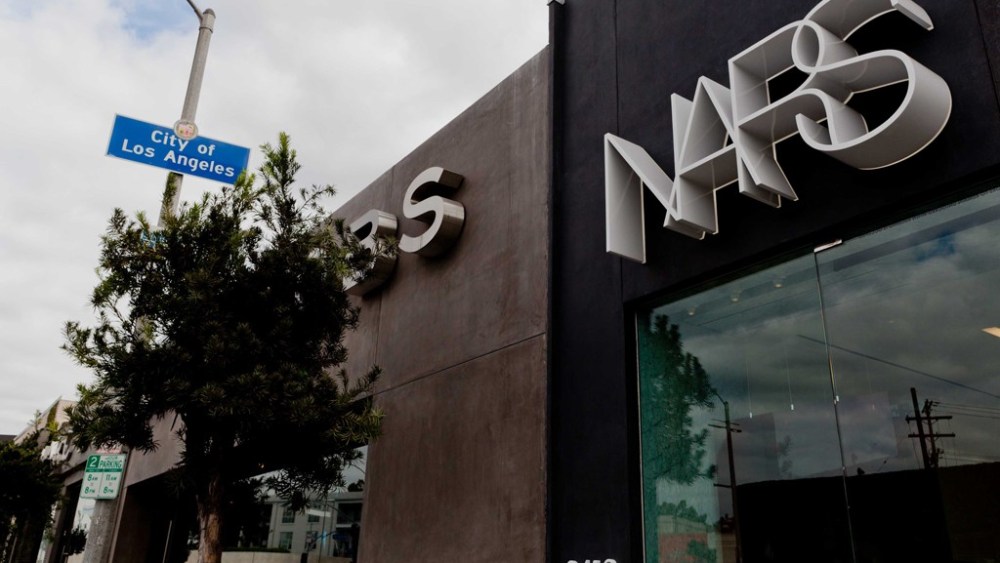 Nars is accelerating its retail expansion starting with a new store in Los Angeles.

Opened last Saturday with a party that drew Alessandra Ambrosio, Mandy Moore, Rachel Zoe, Kirsty Hume, and Laura and Kate Mulleavy, the Melrose Avenue location is Nars’ first outside of New York, but will soon not be the only one. As part of the brand’s strategy to grow to about 10 stores within the next five years, a San Francisco store is slated to open in February. Gearing up for the retail growth, Nars brought on board former Furla USA director of stores Lisa Pavlakis as director of retail, and upgraded its point-of-sale system to enhance customer outreach.

“The reason why there has been a little time, basically a year and a half, between the first store and the second store is that we wanted to take the time to get all the learnings from [the store on] Bleecker, because being a retailer is a very different business model. The second thing is I wanted to put a team in place,” said Louis Desazars, chief executive officer of Shiseido-owned Nars Cosmetics, who added, “The [retail] strategy has not changed. It is a flagship strategy. It is about having beautiful stores in the best locations in the top cities in the U.S. and outside the U.S.” A second location in New York, and locations in Chicago, Dallas, Boston, Miami, London and Paris are being considered.

Desazars said the ideal size for a Nars store is between 1,000 and 1,500 square feet, and the Los Angeles location is at the higher end of the range, making it around three times larger than the Bleecker Street store. There’s plenty in the store recognizable from New York, including bookshelves containing François Nars’ favorite movies and reads, a fireplace and custom-designed sliding display trays. However, the Los Angeles store marks the introduction of a private room envisioned as an intimate space for pre-award show makeup consultations and other glamorous occasions, with lights embedded in the mirrors and six makeup stations.

“There is a different feel to the L.A. boutique,” said Nars, who designed the store with Fabien Baron. “Whereas the Bleecker Street boutique reflects the cozy brownstone community of the West Village, the Los Angeles store is bigger, more modern and almost has a loftlike aesthetic.”

Industry sources had estimated the Bleecker Street store would generate $1 million in first-year sales, and Desazars revealed that figure was exceeded at the store, which he said is showing consistent comparable-store sales percentage increases in the double digits, as is Nars at wholesale. At the Melrose Avenue location, Nars will be forced to cope with the perennial Los Angeles retail conundrum of poor foot traffic, and industry sources expect the store won’t quite equal the $1 million estimated for the first year of the Bleecker Street store.

Speaking of the store in New York, Desazars said, “We are very happy. We have a very strong team there and a very loyal customer there.” He continued, “The average transaction size in units is much higher in Bleecker than it is in wholesale because it is more engaging. People who go into the store are really passionate about the brand and want the full experience.”

In terms of category sales, 75 percent of the sales at retail for Nars are from color, compared to 65 to 70 percent at wholesale. Desazars reasoned that the display units at retail expose customers to a broader array of colors, buoying color sales. He would like to see skin and complexion become a greater portion of the sales mix at Nars, which recently launched the skin-care line NarsSkin. “Complexion and skin is a priority for the company because they are big categories that drive loyalty,” said Desazars. “We definitely need to grow that as we grow our clientele base in freestanding stores.”

Certainly, Nars is becoming a better retailer as it gains experience. The brand is putting in place an improved point-of-sale system in the stores to support clientele efforts, an area that Desazars said could use improvement. With the system, getting information out to customers about events or products should be easier. Overall, Desazars said Nars “is working on the point of difference. What makes this a unique place to shop?

Why should I [as a customer come back?” Among the answers are the 413 Bleecker Street collection special to the stores that Desazars noted would be updated every six months, and a level of artistry — the makeup artists in the New York store were trained by Nars himself — that is unmatched at wholesale.