Elizabeth Pape has come a long way since starting her line in the spare bedroom of her Nashville apartment. 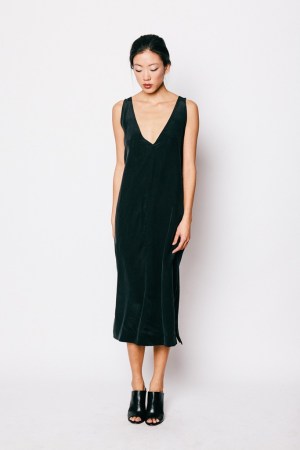 Elizabeth Pape started in business a little over a year ago, designing women’s apparel in the spare bedroom of her Nashville apartment and selling the pieces online. During that time, she set up a warehouse in Nashville, hired 10 people and drummed up $1 million in sales for her collection, called Elizabeth Suzann.

Last month, Pape, 24, and her husband and business partner, Chris Martucci, 25, a third-year law student at Vanderbilt University, came to New York to buy fabrics at Première Vision and explained the strategy behind their growing business.

Pape said she has no interest in wholesaling her sportswear collection, preferring instead to build her business exclusively through her Web site, Elizabethsuzann.com. She works mostly with cottons, linens, silks and velvets to design simple, architectural shapes that have no zippers, closures or buttons. The line features tops, bottoms, dresses and outerwear, retailing from $95 to $500. Most of the line is “one-size-fits-all,” but some pieces are offered in small, medium and large and XS to XL. Pape prefers a neutral color palette of grays, browns, navys and blacks. “Customers love our one-sized basics in neutrals. The Linn Sweater, Georgia Tee and Artist Dress are consistent top sellers,” she said.

Pape is literally self-taught. She bought books on how to make clothes. She began sewing while she was an undergraduate at Flagler College in St. Augustine, Fla., where she became obsessed with vintage shops. Occasionally, she would purchase vintage items to rework and sell back, but more frequently, she would buy pieces at thrift stores or estate sales, and alter, deconstruct and reconstruct them and sell them to a local boutique.
After meeting at Flagler College and marrying in July 2013, Pape and Martucci moved to Nashville so Martucci could pursue a law degree, and Pape started making clothing. The original intention was for Martucci to get a job at a law firm after graduation, but once the business took off, he switched gears and decided to finish his law degree and join her in the business.

“The business started exploding and it can support us financially,” Martucci said. He scheduled his classes for Wednesday, Thursday and Friday, so he can devote the rest of the week to running the business and the Web site.

Today, they employ a team of six seamstresses (two full- time and four part-time) in their Nashville warehouse, who cut and sew all the Elizabeth Suzann garments. Pape also employs four administrative people, who work on social media, financial planning, marketing, shipping and inventory management. Two are full-time and two are part-time. Pape does all the sketching and planning there, as well as first patterns and sample-making. With the additional seamstresses, she doesn’t work on the production sewing anymore.

Pape has cultivated several Nashville customers, but the bulk of her clientele is from New York, Portland, Los Angeles and San Francisco. She even has several customers in Australia. “It’s grassroots, word of mouth. We make everything within two weeks,” she said. She has active Instagram and Pinterest accounts, and has attracted many bloggers who are interested in her line. She encourages her customers to photograph and post pictures of themselves in the clothes.  Pape has found that “very creative types” enjoy wearing the clothes, such as writers, architects or screenwriters. She aims the line at women 35 and older. With every order, she sends a handwritten note and frequently stays in touch with her customers. Each month, her Web site features stories of different people who wear the clothes.  History is a big part of Pape’s inspiration. “That was my alternate future,” said the former political science major. She said she loves shapes from the Forties and Fifties and thinks they still look fresh.

In 2014, Elizabeth Suzann released two major collections for spring 2014 and fall 2015, with additional releases such as new colors of existing styles and a holiday collection. Pape plans to release two major collections this year, with supplemental releases of accessories, new fabrics and limited edition pieces. “We try to keep the Web site fresh with new products, imagery and stories monthly at a minimum, with a goal to increase content creation in 2015,” she said.