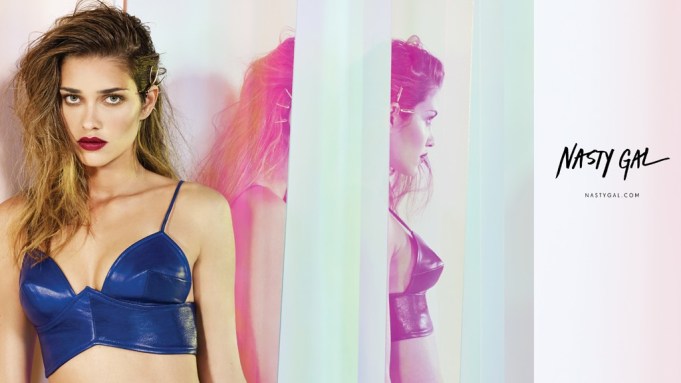 The company will today launch its own line of footwear, Shoe Cult, and is also eyeing intimates and swimwear for next year. The e-commerce pure-play is even beginning to contemplate real-world retail outposts.

“Exclusivity is important for me,” said Sophia Amoruso, the 29-year-old founder, chief executive officer and creative director of Nasty Gal. “Our consumer knows it’s the only place they can get this. The modern girl is less concerned with everything being a brand name. The stuff we’re designing has better sell-through [than third-party designers], but we will always continue to carry other designers. This is just the sprinkling on top.”

If Nasty Gal continues to thrive and executes on its ambitious plans, the five-year-old company could become one of the first online pure-plays to transcend its roots and become a fully developed fashion brand for a new age.

It’s unclear exactly how big the firm has grown. Some estimates place sales this year at $115 million, while others put the company’s top line at more than $300 million. Nasty Gal received a $9 million Series A round of funding in March 2012, followed by a $40 million Series B just five months later. According to industry sources, nastygal.com did more than $100 million in sales in 2012. The site’s growth has been explosive, with 2010 revenues of $6.5 million more than quadrupling to $28 million in 2011.

Half a million shoppers from 50 countries visit nastygal.com on a monthly basis, and more than 30 percent of the site’s sales come from outside the U.S. The company is in the process of building a new headquarters in Los Angeles (it will be completed in the fall), and its first mobile app bowed last week.

Nasty Gal launched its in-house label on Aug. 1, 2012, with a denim collection, followed by the rollout of a full apparel line later that month, retailing from $80 to $400. Footwear, which has consistently been a solid part of the business, was the next logical step.

Shoe Cult will have 45 styles to start, followed by another 50 in September and 60 more to come in October. The collection includes pumps, platform sandals, booties, sneakers, sandals and flats, and will sell for $68 to $188.

In addition to the aesthetics — a lot of heavy metal work, quilted detailing, statement straps and colors and patterns ranging from silver, electric blue and red to leopard and black-and-white polka dots — keeping the price point in line with the site’s offering was key for Amoruso. Although the site will continue to carry shoes in a wholesale capacity from designers like Jeffrey Campbell and Sam Edelman, she saw a place in the market for fashion-forward styles that aren’t pumps for less than $150. She wanted to cater to her customer who is buying a $68 dress and often can’t spend an additional $200 on a pair of shoes.

“The margin on manufactured shoes is an opportunity to have a more profitable business, and we can pass that on to customers because we aren’t paying wholesale prices,” Amoruso said of the PU and leather collection.

The shoe line is the latest expansion for an online success story that the industry is watching closely.

“In addition to the pure margin benefits of private-label expansion, Nasty Gal gets to exercise even more control of how their vision and curation is being provided to the market,” said Al Sambar, a retail strategist at Kurt Salmon Associates.

Nasty Gal is good at curating an assortment for a very specific customer, using social media to talk to that shopper and visually merchandising the site, Sambar said.

“This allows them to drive organic traffic,” he noted. “The customer comes because they want to hear their opinion and see what Sophia thinks.”

When that’s the case, the strategist said, it’s not as challenging for an organization to get customers to come back to the site and stay connected. “If you can do that, there’s not as much urgency in figuring out your marketplace strategy,” he said. “Other brands that don’t have as strong a connection [to shoppers], that aren’t drawing organic traffic with customers, have to then find ways to bring that traffic to their site. Ultimately, if you can’t [do this] then you might have to turn to marketplaces like Amazon that do draw traffic.”

Amoruso, who started selling vintage wares out of her home via an eBay store in 2006, is set on making Nasty Gal a household name, and she’s made some big hires to help get her company there. She said it took six months to get Christian Parkes on board, who officially joined the team at the end of last month as vice president of brand marketing.

She also tapped Sarah Wilkinson, formerly of Asos, as vice president of design late last year — and her first projects are Shoe Cult and the new fall collection. The addition of in-house product last year was a turning point for the company.

Parkes, who previously held posts at Nike, MySpace and Levi’s, said about 20 percent of the product on nastygal.com is footwear. This includes about 800 styles — but come October, Shoe Cult will increase this selection by another 20 percent with 180 styles.

Parkes declined to comment on further investments, but he did explain where the money raised to date has been spent.

“The company has gone through this incredible evolution — Sophia starting it literally in her bedroom — and as it shifts into a real company, there are a lot of things that need to take place,” Parkes said, outlining three areas: logistics, design and marketing and branding. “It’s not the most exciting, but logistics, the back-end and fulfillment were one of the first things we needed to take care of as the company matures.”

He added that as the brand has developed its in-house product offering, there’s been significant investment in design and the way in which apparel and shoes are produced. The last piece has been a marketing and branding component.

“Consumer-facing investments that will start to pay off are next,” Parkes said. “The first print advertising is in the market right now [in the September issues of Elle, Nylon and Teen Vogue], and that is something you will start to see more of.” In support of Shoe Cult, the company is planning a series of marketing events over the coming months and into next year.

“The money we took has been focused on those areas,” Parkes said. “As you evolve into a company and into a household name, from a brand standpoint, you have to get your house in order. The way that the funding has been spent was deliberate in building out those three pillars.”

Amoruso said the next categories for the in-house line are intimates and swimwear, which will launch in 2014. Nasty Gal has dabbled in swim before, but this will be the first major effort in the area.

She calls the upcoming line of intimates “inherently sexy” — and much like with footwear, the product will fill a void she sees in the market.

“There’s not a lot between Victoria’s Secret and Kiki de Montparnasse, and we know how to design cool, weird s–t,” Amoruso said.

In the coming months, she plans to appoint a director of nonapparel to grow the accessories portion of the business. The executive will focus on footwear and other accessories such as handbags and jewelry.

Nasty Gal enjoys an engaged consumer base and an active social media following in the space. The top 10 percent of customers return more than 100 times a month, and users spend an average of six minutes on nastygal.com. It has nearly 900,000 Instagram followers and about 78,000 images tagged on the medium with the hashtag #nastygal. On Facebook and Twitter, the company has about 870,000 likes and 120,000 followers, respectively.

Amoruso maintains her own personal Instagram account that has more than 51,000 followers, and although she sees the value in the social channels, she wants to increasingly move the conversation with consumers onto the brand’s own digital flagship.

“I don’t know what it will look like yet, but we want to create more of own content and interact [with users],” Amoruso said. “For us [and on our site], I don’t think the word blog will be used in a year. Content will exist, but in the form of a blog — I don’t think so.”

Another area she wants to concentrate on going forward is “real-world stuff” spanning fashion, music, culture and art-centric events and stores — whether this means pop-up shops or permanent freestanding doors.

“I’m not a digital purist or anything,” she said. “It gave me the opportunity to start a brand, but it’s not my religion.”