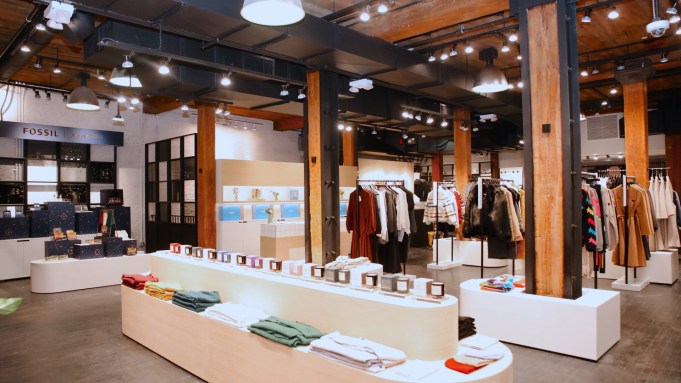 Neighborhood Goods, a reimagined department store concept that’s attracted $27.55 million in Seed and series A funding rounds — along with the interest of shopping centers — on Dec. 7 will unveil its first Manhattan unit at Chelsea Market. The 4,500-square-foot location will occupy what is arguably the property’s best piece of retail real estate, a high-profile location with valuable frontage flanking one side of the main entrance on Ninth Avenue, and opposite Anthropologie.

The Chelsea Market store is Neighborhood Goods’ second unit to open, following the inaugural 14,000-square-foot location at Legacy West in Plano, Tex. A third store with 10,000 square feet of space is scheduled to bow early next year on South Congress Avenue in Austin, Tex. “There will be a lot more stores,” said Matthew Alexander, cofounder and chief executive officer of the Dallas-based company. “We don’t want to be everywhere. We’ll be cautious and take our time. We’ll open a few more next year.”

In deference to its location at Chelsea Market — widely considered to be the city’s first modern food hall — Neighborhood Goods will open in early 2020 ​Tiny Feast​, a European snack bar concept offering bites such as sweet and savory beignets during the day, then transition into a cocktail bar in the evening. An adjacent Pop Up Grocer displays Alexander’s arch humor with signs such as Balls, Bars and Bits.

Alexander called Neighborhood Goods a “malleable” retail concept because it offers a different set of features and functions for [participating] brands. “Not only does this create more utility for brands, but it also ensures a local, relevant experience for customers, rather than the one-size-fits-all approach of many retailers,” he said.

The flexible retail concept has helped Neighborhood Goods drastically grow its partnerships and accelerate its expansion plans. “We imagined what a retail concept would look like with a lower barrier to entry for direct-to-consumer brands,” said Alexander, adding that spaces and financial arrangements are different for every brand. “The length of a brand’s tenure varies. We’re offering them a really easy way to come in with a more integrated blended area.”

Due to the realities of operating retail environments in Manhattan, including higher asking rents, construction and operating costs than in many parts of the country, the new Chelsea Market Neighborhood Goods store had to be smaller, which impacted the number of brands and their presentation.

“It’s an altogether new Neighborhood Goods experience that leverages the same visual language as the Plano store,” Alexander said. “The Chelsea Market location has a tighter footprint, higher density of brands and products, and much different traffic profile. The result is something akin to a departmentalized boutique, albeit featuring brands you otherwise wouldn’t see in a traditional store.”

That was starting to come into focus on Thursday afternoon. The store was a hive of activity as employees played try to beat the clock and rushed to merchandise products on shelves, fixtures and walls in time for a 7 p.m. press preview.

“Plano is much a linear grid. Think of this as a big, intuitive Venn diagram,” Alexander said of the Chelsea Market store, which is much more of an overlapping series of categorical spaces.”​ Brands such as Chinti and Parker​, ​Rains​, ​The Arrivals​ and Modern Citizen were hanging in the apparel area in the center of the store. The jeans bar featured Mott & Bow​, among others, and ​Rothy’s shoes were displayed on a wall. “We’re one of Rothy’s only outside partners,” Alexander said.

A Taschen area was furnished by Hay, so shoppers can take a load off and thumb through the art books. UrbanStems, which created two enormous flower garlands outside Neighborhood Goods’ entrance to the mall, opened an outpost inside the store as well. ​Fossil​ designed a new concept called Modern Magic with dark blue fixtures with constellations and Zodiac signs and stars.

“Fossil is an unbelievably creative company,” Alexander said. “Working with us, outside their stores and typical channels, they can really show that off alongside a new wave of brands.”

Partly a function of the real estate market, marketplaces have proliferated over the last three to five years, when there remains a glut of available space driving down asking rents and giving landlords some incentive to deal. There are many variations on the theme, and the concept has attracted everyone from disenfranchised designers and makers branding together to share expenses to large real estate companies such as JLL.

There’s no prevailing  business model when it comes to marketplaces. Some operators take a percentage of sales, while others charge a membership fee for the time the brand is in residence, or a combination of both.

Neighborhood Goods has struck a chord with investors, including Forerunner Ventures, Global Founders Capital, Maveron, CAA Ventures, Revolution’s Rise of the Rest, and NextGen Venture Partner, among others. Serena Williams, took an early interest in Neighborhood Goods, first as a participating brand. “Serena, I’m sure she’ll come back and do something soon,” Alexander said, “She just reinvested with us again through Serena Ventures. She was an angel investor in one of our early rounds. “

Google acquired from Jamestown the Chelsea Market building for $2.4 billion in what was at the time a near record price for an office building and sending average office asking rents in the neighborhood to $100 per foot, up from $78. The technology giant said at the time that it didn’t plan to make any changes to the retail area. Chelsea Market opened in a former Nabisco factory more than two decades ago when the neighborhood was heavily industrial and the hub of late-night truck deliveries. The area has gentrified and there’s no manufacturing facilities in the building, but Chelsea Market still has a slightly raw, unfinished ambience, which Alexander said attracted him to the property.