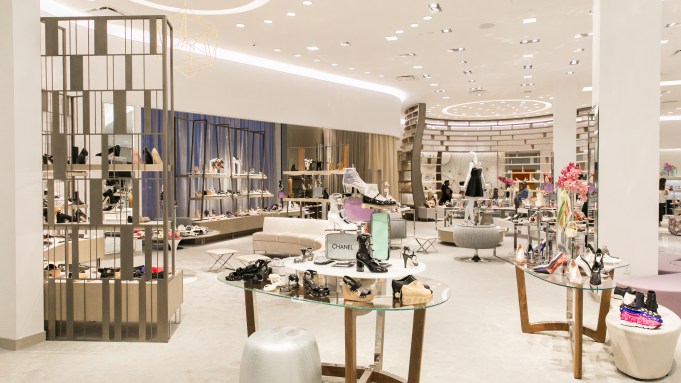 LOS ANGELES — Come in, sit down and, well, hang out for a while.

That’s what Neiman Marcus would like shoppers to do when they enter its 134,000-square-foot Beverly Hills store, which just capped a roughly two-and-a-half-year major remodel on a space whose last major refresh was in 1997 when the luxury retailer completed another two-year project.

Now, as all retailers grapple with what they’ll need to do to woo and remain relevant among customers — even the luxury ones, long seen as a safe haven from the broader impacts of digital and direct-to-consumer — Neiman Marcus Beverly Hills has created an insulated world of boutiques across its five-level store to get people to extend their stays and think beyond simply buying a new handbag or evening gown.

“That’s what we kept hearing from clients,” said Gretchen Pace, the store’s vice president and general manager. “Even though they didn’t say it directly, that’s what they wanted. I had one woman say, ‘When I was renovating my kitchen, I was at Mariposa [the restaurant on the lower level] everyday and I thought, ‘Oh, we’re her other environment’ and I know companies want to be that. So I do think they [customers] were seeing us that way anyway, so we said, ‘What more can we add to make it feel even more homey?’”

It’s a concept that’s spilled out across the store’s four other floors, beginning with beauty, which was completed in early 2015, adding three facial rooms and a private event space, converted from the former offices of the public relations team. The event room is now used for holiday gifting, wardrobing, small parties and other events for groups of up to about 10.

With each phase of the renovation, new observations about how customers have interacted with the changes have informed the next floor’s decisions. The big point being the addition of what the store calls residential areas, or places for people to sit and chat with one another outside of the store’s two restaurants and bar.

“It’s like a little shopping club and it’s fun for us, too, because it’s much more personal and we can get to know the clients better,” Pace said. “It’s an interesting unfolding because it’s taken us two-and-a-half years.”

It’s the next four floors above beauty that have created a near insulated environment within the Beverly Hills store in which floors are merchandised to create shop-in-shop environments with an effect as close to Main Street as one might possibly get within a department store. Customers can step into boutiques for Goyard, Chanel, Givenchy and Céline, among others, on the floor serving women’s handbags, shoes and jewelry, all of which saw sprucing up throughout last year.

“It feels like you’re going from shop to shop,” Pace said. “You really feel the brands much more than you used to.”

The boutique experience continues on the next two floors for women’s apparel with signage hanging in front of the “shops” for each brand. It’s also mimicked on the store’s top floor, dedicated to men’s, which wrapped up most of the construction in November, the same month the store added the plant-based restaurant Matthew Kenney NM. Those final touches signified the last of the major work.

Smaller projects, such as the completion of the men’s Ermenegildo Zegna shop, are expected to be completed around Dec. 18 — complete with a fireplace — while women’s eveningwear will be completed in the next few months.

“I feel like we’re never done,” Pace said of the near constant changes — big or small happening — at the store. “We finish and then we say, ‘I think we should change this’ and the nice thing is that we do.”