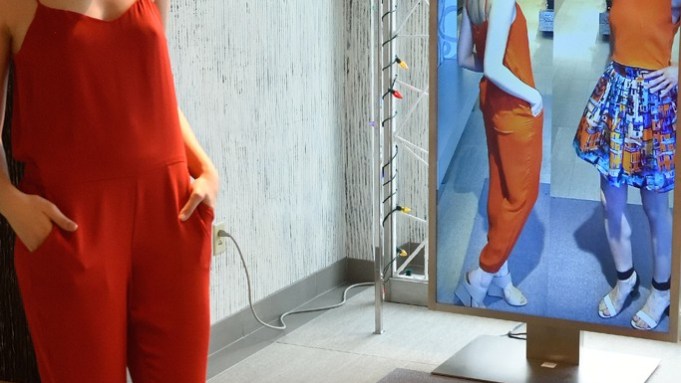 In a small space inside Neiman Marcus Direct in Dallas, the luxury chain manages a big mission — evaluating, designing and testing new technologies and applications, the kind that have been inundating the retail scene.

“I can run from 10 to 15 different projects in it today,” said Scott Emmons, enterprise architect for the Neiman Marcus Innovation Lab, also known as the iLab.

Two-and-a-half years ago, Emmons built the iLab, which was launched in a conference room, moved to its current 450-square-foot space, and is now expected to be relocated to a larger work area and adjourning showroom for presentations to Neiman’s executives.

The iLab at the Neiman Marcus Group suggests the company’s deepening dive into emerging technologies, many bridging the online and brick-and-mortar channels. “Memory” mirrors are popping up in a handful of Neiman’s fitting rooms, beacon technology has been turned on in a few doors and recently, custom-designed “interactive” tables have been placed in a few of Neiman’s posh shoe salons — all technologies that began as discrete test projects inside the iLab and advanced to pilot projects on the selling floors.

Emmons is also leading initiatives around information systems, BYOD, digital signage, wearable tech and efforts to personalize and enhance the shopping experience, and has overseen what officials describe as a complete Wi-Fi refresh, major wide area network upgrades and a deployment of more than 8,000 Apple iOS devices — 5,000 iPhones and 3,000 iPads — to Neiman’s sales associates.

“This whole innovation thing permeates throughout the business,” Emmons said. “My phone rings off the hook and my e-mail is overflowing with pitches and concepts. Ideas come from colleagues, my research, executives and vendors. I rely on help from teams from across Neiman Marcus to help me cull the list.”

The iLab is also where the information services arm of the company connects with NMG’s marketing, creative and store planning teams, assisting Emmons in determining what concepts are wrong or right for the business, though it’s just Emmons, an intern and a handful of volunteers there regularly. “We kind of needed a central point for folks with outside-the-box ideas can come and make it happen,” Emmons explained. “There is definitely a filtering process that has to occur but I don’t think we landed on the perfect method yet.”

Emmons was interviewed during a break at the International Consumer Electronics Show in Las Vegas last week, where he said he was scouting for “the next big thing,” and that he had just emerged from a meeting with a small start-up company creating wearable-tech jewelry. “This will very likely end up in the iLab,” he said.

For this techie, who has worked at Neiman’s for more than eight years and earlier was at Integra Solutions working on the Neiman’s account full-time, the search for innovative and viable technology is “daunting,” though not without its amusing aspects. “There’s a lot of outrageous technology at CES,” observed Emmons. “This is the year of selfie stick. Those are everywhere. Drones are everywhere. 3-D virtual reality headsets of every shape, size and color are here. There are lots of really weird personal transportation devices, self-powered skateboards, lots of different things to ride around and propel yourself.”

Screen technologies are also ever-present at the show. “With display technology, there’s definitely some I would play with in the lab,” Emmons said. “We’re not really quite ready to introduce drones to the company, but you never know.”

Amid the deluge of technology that he confronts, “There are certain things, you know, there is an immediate R-O-I [return on investment]. There are other things that are more Willy Wonka, off-the-beaten path things.”

In Dallas, Emmons was recently introduced to Grabbit, a location-based technology where, for example, if T-shirts are on sale at a concert, consumers can use it to purchase without waiting in line. As a Neiman’s application, “It didn’t immediately jump out at me but for special events it might be interesting,” Emmons said. Through the people at Grabbit, Emmons was introduced to three other tech start-ups that could be examined.

Last year, Neiman’s introduced “Snap. Find. Shop.” which enables consumers to snap a photo of a handbag or pair of shoes, wherever it’s spotted (on the street, in a closet, on a magazine page), triggering a visual search of neimanmarcus.com, which quickly sends photos of the same or similar products to a user’s iPhone. It works for shoes and handbags only, with additional categories being considered for the future. The feature is available on the Neiman Marcus app, which is driven by mobile visual search firm Slyce, downloaded from the iTunes app store for use on iPhones. Neiman’s said it’s the first luxury retailer to provide the service, though other retailers, such as Macy’s, have begun offering similar technologies.

Recently, two memory mirrors were installed in Neiman’s Walnut Creek, Calif., store. The San Francisco and Willow Bend, Tex., stores are slated to each get a pair. The device helps customers make their fashion choices and show others what they’re considering. In front of the mirror, “She can do a twirl, record a short video and review it, compare videos side-by-side, share them with family, post to Facebook, retrieve them at home and delete videos she wants to opt out,” Emmons explained.

In another pilot program, Apple iBeacon technology is enabling shoppers to receive notifications on their mobile devices regarding discount promotions, new product arrivals, designer appearances and other special events happening then and there. It’s being tested at the stores in Austin and San Antonio, Tex., and Walnut Creek.

Emmons recalled that at last year’s National Retail Federation convention in New York, “I discovered in the back corner these touch tables” that people could view products on. He was fascinated, and spent the next 11 months at the iLab refining the hardware and software and working with store systems personnel and the vendor, to determine what data should be loaded into the table, and a redesign with the right aesthetic for Neiman’s luxury selling-floor setting. The tables enable customers and store associates to comfortably view (not purchase) online and store inventory across multiple categories and add items to a wish list. The software also supports a recommendation engine. The tables are like large, enhanced digital look books, with ultra high-definition 32-inch touchscreens from T1Visions, covered by a pane of glass. Since November, the three interactive tables, each 70 inches long, 34 inches tall, and 26 inches wide, have been in the shoe salons of Neiman’s in Austin, Chicago and Topanga.

“We’ll know more or less by the end of this month or early February whether to deploy more of these,” Emmons said. In the meantime, Neiman’s is pulling together analytics on usage and getting feedback from stores on what’s working and what isn’t. Emmons is optimistic. “I knew this beautiful piece of furniture would work in our store environments. It’s a no-brainer to me.”